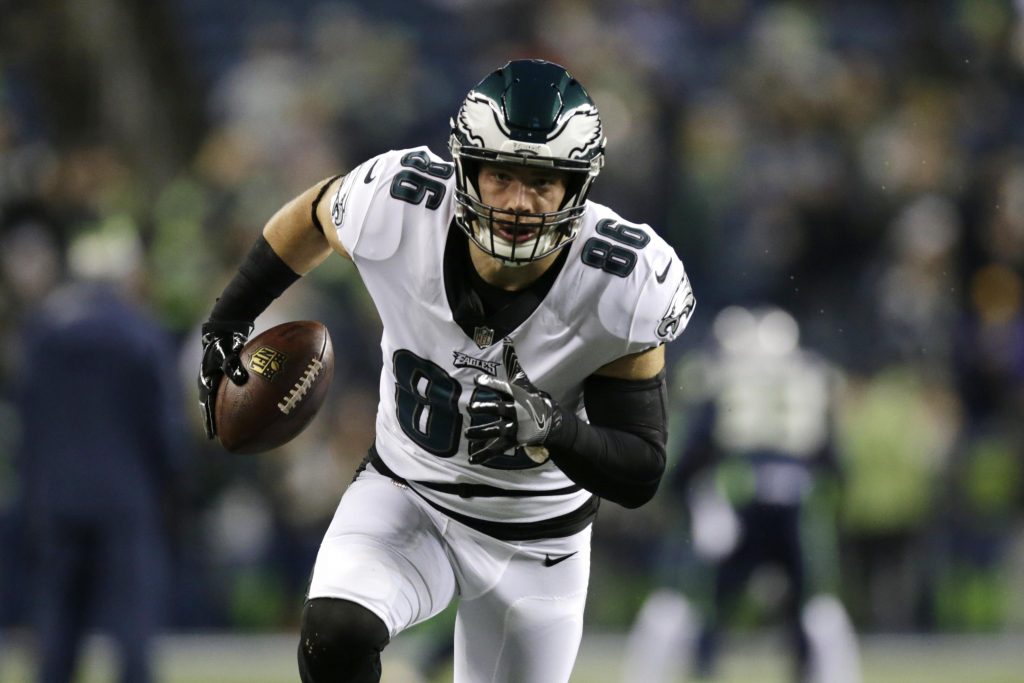 As a fantasy football dynasty player, you’re constantly thinking about value. You are always trying to balance what’s good for your team right now and what can keep your team successful for the long haul.

Star fantasy players are not easy to come by. There are only a handful of players at each position that you know you can count on week in and week out, no matter the matchup and Zach Ertz is one of them. Let’s take a deeper look at Ertz since the start of the 2016 season when Carson Wentz became the starter.

In Wentz’s rookie season, the football world was quickly able to realize his love for Ertz. Prior to the 2016 season, Ertz had only eclipsed 70 receptions once in three seasons. Since then, Ertz has crushed the 70 reception mark every year. Ending the 2016 season with 78 receptions, Ertz was starting to get noticed by fantasy players everywhere. He slowly started to crawl up draft boards. By the start of the 2017 season, Ertz was being drafted in the 7th round of PPR drafts and it didn't stop there. After the Eagles Super Bowl run, he again rose up draft boards heading into the 2018 season...a season where Ertz finished with career highs in receptions (116), yards (1,163), and touchdowns (8).

He is now the main target in the Eagles offense and has been a perennial top three producing tight end. So why would I be recommending dynasty players to sell? For two simple reasons: opportunity and cost.

Wentz has always loved playing with Ertz, but his fantasy dominance has certainly come with some irregular circumstances. Since the 2017 season when the Eagles won the Super Bowl, they have seemed to be injury plagued in a way only a few teams could understand. Every year, Ertz has become their main weapon simply out of necessity. Last season, the Eagles lost each of their four starting receivers to an injury before the halfway point of the season.

By the end of the year Wentz was throwing to Ertz, Goedert, and some lawn chairs. So of course, Ertz and Goedert became the focal point of the offense. Mix in the fact Wentz has always loved utilizing the tight end position with the Eagles lack of offensive weapons, and of course that would produce not just one, but two top-12 fantasy tight ends.

Don’t get me wrong, I love Ertz. He is a great player with one of the best skill sets in the league, but there are some new roadblocks in his way that may keep him from being a top fantasy producing tight end for much longer.

First, the Eagles offense has been revamped in the offseason. They drafted and signed multiple wide receivers that will help spread the offense out and take some targets away from him.

Most importantly though, is Ertz’s looming contract situation. He is set to become a free agent in 2022. The Eagles front office discussed an extension with him in the offseason, but reports indicate the two sides were not particularly close. With the current status of the league salary cap, teams may not be able to afford as many players as they thought prior to this virus outbreak. If Ertz were to be traded at any point or not resign with the Eagles after next season, his fantasy value would surely go down. He is in the perfect offense for accumulating fantasy points between his usage and his relationship with his quarterback. There are very few other teams for him to join where you would be able to expect consistent fantasy goodness from him on a weekly basis.

I am high on Ertz for the 2020 season, but  if I owned him in a dynasty league, I would start looking to trade him to someone in need of a tight end. As we know when constructing our dynasty teams, we always have to be looking at the present and the future too. This is how you extract as much value out of a player as you can.