A 2021 regular-season snap is still too long away, yet we already have a devastating injury to a promising fantasy favorite. Cam Akers is out, and now Xavier Jones should be a name to notice on your draft boards. 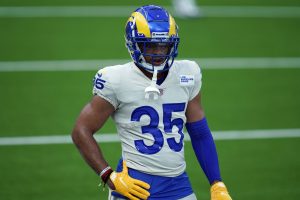 The Case For Jones

Jones is still on the Rams’ roster. That has to mean something. He’s an undrafted free agent who signed with the Rams in 2020 and recorded 0 yards on 0 attempts, and scored 0 touchdowns. Yet, Sean McVay kept him on the roster, and now Jones finds himself second on the depth chart on an exceptional offensive unit.

Jones’ “stat line” shouldn’t be too alarming. Again, he was a UDFA buried behind three other backs, and that’s the standard for UDFA’s not named James Robinson. Jones did put on a show in college.

In five years at Southern Methodist, Jones had his best season as a senior. He led the NCAA in scoring (11.5 ppg) and rushing touchdowns (23). He was the team’s workhorse.

The Case Against Henderson

Since we don’t have much on Jones, part of the case for Jones is a case against Darrell Henderson. Henderson is not bad and showed some promise in 2020, but it seems McVay doesn't see him as a feature-back. Jones will get opportunities.

These numbers tell me Jones will see the field. He’ll get a chance. If lightning strikes with Jones, McVay has shown he stays with the hot hand.

Henderson also saw only 24 targets with 16 receptions in 2020. That’s a rough 66.7% catch rate. New Rams quarterback Matt Stafford will be flinging the ball all around the field, so that could give Jones a chance in the passing game. Jones recorded 72 catches in college.

The Red zone could easily be a place Jones sees some playing time. Last season Henderson and Akers both accounted for 34 RZ touches while Malcolm Brown finished with 20 since Akers (sad face) and Brown are out of the picture, which leaves a vacancy of more than 50 Red Zone touches.

This article is not a HURRY AND BUY piece. This is simply a ‘don’t lose track of Jones’ notice. After two seasons, Henderson has yet to solidify his role in the Rams offense, and it could keep the door open for Jones. Depending on how the season shakes out, Jones could at least carry some FLEX value, if not more. Keep a close eye on those training camp reports.