Why Leonard Fournette can win you a dynasty title 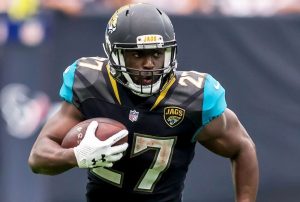 When you’re on the clock in a dynasty start-up or redraft and you’re staring down at a Jaguar, it’s usually not a great feeling. The Jags have been tricky to peg for a consistent fantasy producer. There was the Blake Bortles period. The Allen Robinson and Allen Hurns year. T.J. Yeldon had his moments, but he was never really ‘the guy’. All of that brings us to Leonard Fournette who has been, without question, the most desired player on the Jags when it comes to fantasy in recent memory (perhaps Chark makes us rethink that this year).

Leonard Fournette burst onto the NFL scene his rookie season in 2017 with 10 total touchdowns, over 1000 yards rushing and added another 300 yards through the air. He was a frustrating player in 2018 as he battled multiple lower body injuries and  missed one game in week 13 due to suspension. In 2019 he went over 1100 yards on the ground, got 100 targets (wait, really?, yes), which tallied 76 catches for 522 yards in 15 games. Fournette was 8th in rush attempts, on pace for roughly that in 2018 and 7th in rush attempts his rookie season. Fournette has played 75% of his available NFL games to date .

What’s the pause for fantasy managers in wanting to roster Fournette for dynasty? Let’s take a look.

The obvious reason is that we have no clue what team Fournette will be on after 2019 as the Jags have declined his 5th year option, so it’s reasonable to assume he won’t be back. That said, the Jags have zero reason to hold back on Fournette’s volume (not that they were anyway). ‘But now, Chris Thompson is taking all the passing down work’.  Thompson will likely vulture a good portion of those targets Fournette received last year, but Thompson has also missed at least 5 games in each of the last 3 seasons. If Thompson were to miss time, it’s likely the scenario reverts back to last season and Fournette starts seeing additional targets.

‘Fournette doesn’t get into the end zone’.

Well, I can’t fight you on that in regards to last season. Fournette had 23 carries inside the 10 zone last season and the fewest touchdowns (3) of anyone with at least 20 carries in that part of the field. While touchdown’s are one of  the most difficult stats to predict and shouldn’t be considered a sticky stat from year to year, it’s hard to imagine that number not going up for Fournette. There’s really no one to challenge him for work in the 10 zone and the Jags should see an uptick on offense with Gardner Minshew under center all year.

If you’re in a team that’s in contention for a fantasy championship this year, look to the team with Fournette in your league and see what kind of deal you can strike. If the past has taught us anything, it’s that Fournette is going to get opportunity, and in fantasy, opportunity is hard to come by at the running back spot.