Who is the wide receiver two in Green Bay? Does it matter?

In the 2020 draft, most football analysts expected the Packers to draft at least one wide receiver. Instead the Packers selected: quarterback Jordan Love in the first 1st round, running back AJ Dillon in the 2nd round, and tight end Josiah Deguara in the 3rd round. They made up for it (not really but play along) by signing Devin Funchess in the offseason….who opted out of the first chance he got. So who is the wide receiver two in Green Bay after Davante Adams, and does it really matter?

Before we dig into who the wide receiver two in Green Bay is, let’s see if it even matters. Aaron Rodgers became the starter for the Packers in 2008 and played at least 15 games per season from 2008-2012. Rodgers' WR2 finished on average as the WR24 through those years. Pretty good. From 2013-2019 Rodgers played 16 games in every season except 2013 when he played 9 games, and 2017 when he played 7 games. Excluding those seasons, Rodgers WR2 has finished on average as the WR35 2013-2019. The average finish is not as high in the second half of Rodgers career, however Rodgers was able to sustain two top 10 wide receivers in 2014 and 2016. In 2014 Randall Cobb finished WR7 while Jordy Nelson finished as the WR3 and in 2016 Davante Adams finished as the WR8 while Nelson finished as the WR1. There is certainly some optimism there for Allen Lazard, Marquez Valdes-Scantling, and Equanimeous St. Brown. 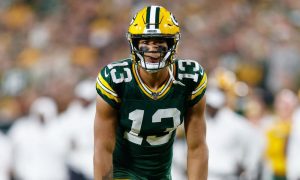 I am not going to do a deep dive into Allen Lazard [<<<Click the link to see more] as Tommy Harvey already has. However, what I will mention is that Lazard is being drafted as the WR65. If you remove the first 5 games of the 2019 season when Lazard did not receive a single target, he finished WR49 weeks 6-17. The departure of Geronimo Allison and Jimmy Graham leave behind 115 vacated targets. While Jace Sternberger is the projected tight end, he did not have a single reception in 2019. It is safe to assume that he will not see all of the 60 vacated targets Graham left behind. Lazard with more targets should not be drafted as the WR65. We have already established that in the last 5 full seasons Rodgers played, his wide receiver two on average finished as the WR35 and in 2/5 season they finished as a top 10 wide receiver. Lazard may be the reason why the Packers did not draft a single wide receiver in the entire 2020 draft class. 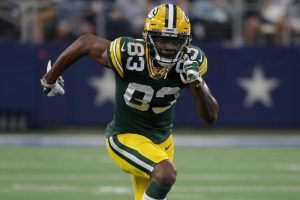 Marquez Valdes-Scantling stands at 6’4” 206 pounds. While he fell behind Allen Lazard in the depth chart last year, the departure of Geronimo Allison will help Scantling significantly. Allison is no longer with the team and left behind 55 targets and an open slot role. Scantling is very slot dependent and averaged more points per target in the slot than he did in any other formation. Scantling is also fast. His 40-yard dash was 4.37, good enough to land him in the 96th percentile while his speed score of 117.6 landed him in the 97th percentile. Scantling will need a lot of things to break right for him and will likely only be the WR3 on this offense, but going back into the slot may be the break he needs. 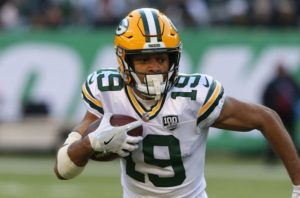 After showing flashes in his rookie year, St. Brown missed the entire 2019 season with an ankle injury. Equanimeous St. Brown and Valdes-Scantling are both very similar in terms of size, built and where they line up on the field. They are both around 6’4 and 210 pounds. St. Brown took 253 snaps out-wide his rookie year as well as 99 snaps in the slot. While similar to Scantling, he is much slower. His 40-yard dash is only in the 71st percentile. While slower than Scantling, he has the support of Aaron Rodgers. Rodgers was excited to play with St. Brown last year before the season ending injury. Rodgers said, “almost quietly, I think EQ has had a really nice camp. I think he’s been very consistent. We haven’t talked about him a lot, which, in this case, is actually a positive. It’s almost like, ‘Yeah, well, he’s on the squad.’ He’s been that good. It’s almost been an understated, really solid camp for him.” St. Brown is going undrafted in redraft leagues, understandably so. However in dynasty he is worth a stash.

It is unclear who will be the WR2 in this offense. My bet would be on the easier choice, Allen Lazard. I expect him to finish as the WR35, however I would not be surprised to see him finish higher.