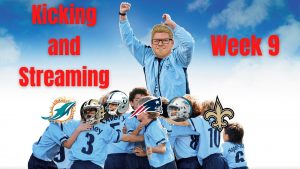 WHAT IS STREAMING IN FANTASY FOOTBALL?

When playing fantasy, there are a lot of players who are considered "every week starts". Some of these players include Christian McCaffrey, Davante Adams, Travis Kelce and so on. There are a few positions in fantasy football that don't have as many every week starters. Quarterbacks, defenses and kickers are very streamable positions, meaning that they're usually able to have their spots filled in a pinch off of the waiver wire and free agency. This is the week 9 streamers guide, Kicking and Streaming.

Every week, I'm going to bring you the most up to date streamers moving forward to make life as easy as possible for you! There will be two lists. The first list will be the best streams for the players matchup the upcoming week. The second list will be a players 3 week outlook for long term streamability.

My top streaming QB in my fantasy football rankings is Tua. We all knew he was going to struggle against a great Buffalo Bills defense last week. The Houston Texans are an incredible matchup for Tua as they give up 22.1 fantasy points per game to opposing quarterbacks. That's among the fifth most points allowed this NFL season. Tagovailoa has a great chance to be a top fantasy football quarterback in week 9 and he's only owned in 44% of fantasy leagues.

In week 10, Tua takes on the Baltimore Ravens and in week 11, the New York Jets. The Ravens rank dead last in passing yards allowed per game with 296.1. The Jets are also surprisingly bad at giving up passing yards. They rank 27th in the league and allow 275.3 yards per game through the air. This is where it gets interesting; both of their fantasy points allowed to QBs are much lower than you might expect. The Baltimore Ravens give up an average of 18 points per game to quarterbacks and the New York Jets are even better with only 17.6. With this in mind, I give Tua a week 9 grade of an A but his next 3 week schedule grade a C+.

In week 9, I have to mention Taysom Hill. It is uncertain if he will clear the NFL's concussion protocol before game time but everything is progressing smoothly according to head coach Sean Payton. So far this season, Hill has only been used as a gadget player for the Saints. However, last season in the absence of Drew Brees, Taysom had a stretch of four straight games of fantasy relevance. As far as fantasy points in that time span, he averaged about 21 points per game. The added bonus Hill gets with his running ability makes him an awesome stream if he is cleared to go by game time. The Atlanta Falcons matchup isn't a match made in heaven as they rank 12th best against fantasy quarterbacks. I'm choosing to cling to the high floor he provides with his ground game and he is hardly owned in many leagues.

His week 10 and 11 matchups are a mixed bag. The Philadelphia Eagles rank even higher than Atlanta against fantasy quarterbacks, only allowing 18.1 fantasy points per game on the season. Week 11 has Taysom up against the Tennessee Titans who rank near the bottom when allowing fantasy points to opposing QBs. The Titans give up an average of 20.5 fantasy points per game. Over all, Taysom Hill isn't an every week starter with these matchups but in a pinch, his rushing floor will make him very handy. I give his week 9 grade a B and his next 3 week schedule a B+.

Coming off of his bye week, Derek Carr finds himself on my streamers list yet again. This man is averaging 18.1 fantasy points a game fantasy managers just don't seem to want to keep him rostered. In his seven games this season, only one was a truly poor performance while the rest have shown what an awesome player he can be. He has new coaching and one of the best tight ends in football in Darren Waller. His week 9 matchup is against the New York Giants and I fully expect Carr to pick up where he left off before the bye week.

Weeks 10 and 11 have a foot in both camps. Carr's upcoming matchup is against the Kansas City Chiefs and their defense is terrible. They give up the 2nd most fantasy points to quarterbacks on a weekly basis at 23.9 and they've got the fantasy players on the other side who can score so this game could very well be a divisional shootout! The Bengals on the other hand are the 10th best against opposing fantasy quarterbacks. They aren't the Arizona Cardinals or the Buffalo Bills but those numbers still aren't very comforting if you're streaming. I give his week 9 grade a B+ and his next 3 week schedule a B+.

On average, the Houston Texans allow double digit fantasy points to opposing D/ST's. It doesn't matter who they're playing, the Texans are bad, no matter how you slice it. I stream almost every defense I can against them. They're 6th worst against fantasy running backs, 6th worst against wide receivers and 4th worst against the tight end position. They have problems all over the place and allowing 10.1 fantasy points per game is almost laughable. It makes the Miami Dolphins my defensive stream of the week and it isn't even close.

Baltimore will be a tough matchup for them in week 10 and the Jets could be complicated if they march out hall of famer Mike White. As far as a stream goes, their week 9 grade is an A+ and their 3 week schedule grade is a C+.

The Patriots D/ST are averaging double digit fantasy points and the Carolina Panthers are allowing 7.9 fantasy points per game to opposing defenses so this really seems like a no brainer. Throw in the fact that Sam Darnold could miss the game in the concussion protocol, I don't see a way that this gets better.

In the upcoming matchups, the Cleveland Browns rank pretty well against opposing D/ST's. However, this is on a season long average and the past 3 weeks they haven't really been themselves. The Falcons aren't bad for the Patriots either, especially with Ridley missing a significant chunk of time. I give their week 9 grade an A and their next 3 week schedule a B+.

I don't recommend streaming this defense in weeks 10 and 11 due to matchups. Both the Titans and the Eagles rank very well against opposing D/ST's. It's worth mentioning that they have scored 17 points against the Green Bay Packers, 23.5 against the Patriots and 18.25 against the Buccaneers. So, maybe matchups aren't everything.

So in week 6, I got a lot of comments telling me to check out the reddit user u/subvertadown for kicker info and oh my gosh, there's so much. It would be a crime not to take advantage of all this data and insight. From now on, this article will have it's kicking streamers come from them! Their newest take on kickers is to list the top 10 projected into categories so that's how we're going to do it.

We're to the point in the season where byes start to pile up and come at you quicker than you'd expect. It's very important to take note of your bye weeks and make sure you're prepared. You don't want to be the league mate caught with their pants down because you were too busy to take a look two or three weeks down the road. I have listed out this week's bye teams along with the most important players involved in fantasy football. If you see any players on your squad then, well... You'll need to address that quickly for the upcoming matches! And don't forget, quarterbacks, defenses and kickers are all extremely easy to stream.

My favorite streams this time around are; Tua Tagovailoa, Taysom Hill, the Miami Dolphins D/ST, the New Orleans Saints D/ST, Greg Zuerlein and Nick Folk. Come back next week for more Kicking and Streaming and good luck in week 9!

Co-owner and editor of B3T Sports. I’ve been involved in the Fantasy Football community for over 8 years now. Over the past 2 seasons, I’ve begun writing fantasy football content, sports betting content and hosting 2 podcasts every single week!