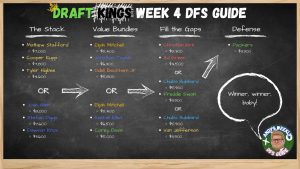 What are Daily Fantasy Sports?

So what are Daily Fantasy Sports? With sports gambling becoming legal in more and more states, Daily Fantasy Sports contests, or DFS for short, are beginning to shine even brighter. DFS contests have been legal for a while now as they are considered a game of skill and not gambling. However, many still don't know what these DFS contests even are. Let's take a look

I'll be using DraftKings as an example here. DraftKings DFS contests work like all the rest. They will assign you a total salary along with assigning values to professional athletes related to the sport you'd like to build a team for. You spend your given salary to build the best team you think is possible to compete against thousands of other contestants for cash prizes! And unlike traditional fantasy sports, this is a one-and-done contest type. Once the contest is finished for the weekend, you have either won or lost and then you can just go about your life without any more attachment to the team you built. Pretty neat, huh?

Okay, now that you've got the basics down, how do you find value when playing DFS? If you're into the NFL and fantasy football, then I'm your guy! Every week I'm going to bring you the best strategies and stacks that I believe give you the best shot at some DFS cash outs!

I'm ready to hop into it so let's go.

Stacking players in DFS is defined as rostering two or more players from the same team. The goal being that a fast and strong offense will help the other players to score more, allowing you to "double up" on points in a sense.

For week 4, I've got two stacks I'd like to focus on and I believe they're the base of our team. 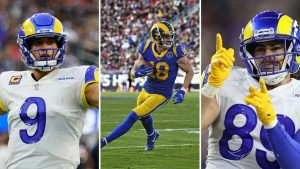 If you've been watching football this season then you don't need me to tell you that Mathew Stafford is absolutely putting in work. In fantasy football leagues around the world, Stafford is lighting it up. In the first game of the season, Stafford threw three touchdowns. And in the next two games, he nearly threw for seven touchdowns. Cooper Kupp is no Megatron but he might be the best weapon Stafford has had since Megatron.

Speaking of Cooper Kupp, he has been turned into one of the league's elite pass catchers and wide receivers. With the new quarterback addition to the LA Rams, Kupp has never looked better and their connection is strong. He's got five touchdowns on the year and is a target monster. As far as fantasy points go, Kupp is simply destroying the competition. Adding the cherry on top, Kupp isn't even the most expensive wide receiver out there. Talk about a bang for your fantasy points buck.

Just under six catches last week and the first week, Tyler Higbee is seeing some major usage in the realm of tight ends. Sure, wide receivers will always be a QBs best friend (unless, of course, your names are Patrick Mahomes and Travis Kelce). But as is the rules in NFL DFS, you've got to roster and play a tight end, so why not play one with great stacking potential and delicious fantasy value? 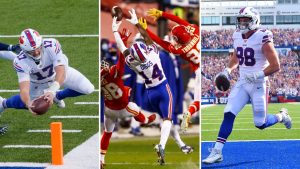 Not only is Josh Allen really good at football, but he's just been heating up in general over the last week. Allen and the Buffalo Bills had a rough go of it in the passing game the first two weeks but really let Washington have it through the air in week three. Allen scored five touchdowns against the Washington Football Team and in week four, the Bills get to host the Houston Texans. It's a dream matchup.

To pair with your Josh Allen QB, Stefon Diggs is the perfect compliment. Diggs has been quiet for the Bills so far over the first three games but his target share is enormous. As long as Diggs continues to get the volume, he's a ticking time bomb of fantasy football points waiting to explode. He even had over eight catches two games ago against the Pittsburgh Steelers. He is one of the premier pass catchers in the NFL and he is the second part of the same game stack.

Nothing too fancy here with Dawson Knox at tight end but what you do get is stability. So far over the first three games, Knox has seen consistent usage along with catching two passing touchdowns from Allen. The chemistry is certainly starting to build between these two and even better yet, Knox is an incredible week 4 NFL DFS value. Fire him up as the third piece of the same game stack.

Next up, I've put together some more bundles to add to your already rostered stacks. The bundles, however, do not come from the same team. Instead, they are built purely with value/performance in mind. It sounds silly, of course we want the best value/performance in all of our players. But that's so much easier said than done, I assure you.

The 49ers backfield situation is a complete mess. The good news is, you can take advantage of the low prices. I believe that Mitchel is going to play in week 4 and that Shanahan believes he needs Mitchell to win a crucial divisional matchup against the Seahawks. Last week he never saw the field due to injury but in his first two games he saw an average of 18 rushing attempts per game. In this 49ers offense, those are golden and Mitchell's price tag makes this an incredible value play. So valuable actually that he has found himself in both value bundles.

It seems a little odd that the Colts have kept pulling back on Jonathan Taylors touches through the first three weeks. He showed last year that he can be the bell cow back they desire and so far they haven't used him like that at all. A little on the pricey side, I've thrown Taylor into this first bundle for one simple reason: Miami. The Dolphins are one of the two worst defenses against fantasy football running backs. JT is probably the lowest he'll be priced all year with the way his season has started. To me, that's an absolute smash. The analytics say to play him and I'm going to listen, especially at his current price.

Coming back to football after an injury, Odell Beckham Jr. took his first snaps of the season in week three against the Bears. Luckily, it didn't seem like the Browns needed him but there are some things to note from his performance. Just over eight targets and five catches, Odell racked up seventy seven yards through the pass game. The Browns waited a long time to bring him back from his injury so I believe he is 100% a go and a great value. Baker can't just throw the ball to tight ends all game. With Landry on IR, wide receivers are thin for Cleveland. I expect a big week out of Beckham.

I told you! Here he is again. I'm not going to bore you with the same exact reasoning. But remember that his value is so good right now, it's insane. 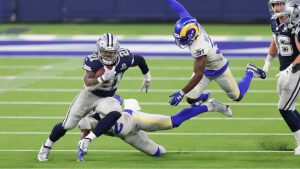 Starting slowly in the beginning, Elliot has really ramped up his production over the last week. The Cowboys are feeding him the ball and he's the tenth running back on the board for DraftKings. Part of the reason he's so cheap this week is due to the Carolina Panthers and their current defensive stats. I'm a Panthers fan, and as much as I'd love for them to be stellar defensively, they haven't really played any real competition. I believe Zeke will do Zeke things and really help out your rosters.

Zach Wilson is not good. At least, he hasn't looked good yet this season. His arm talent is incredible but he doesn't set his feet, he runs around too much and he tries to push the ball where it shouldn't be pushed. With all of that being said, Corey Davis is the #1 on his team. Any wide receiver getting the volume that Davis is getting at the $5,000 price range isn't their teams #1 guy like Corey. I believe he's the best value there based on volume alone.

Now it's time to fill in the gaps. That's right, they can't all be studs. Above we spent time going over the core building blocks of your team. The players I recommend you build the team around as a whole. Filling in the gaps here, I've got a few more pairs of players who I think are great in value.

Let's hit it with the lightning round.

Getting lots of usage from the Arizona offense. Similar to Kirk's rookie season where he was initially considered a potential breakout, this season he's playing a majority of snaps from the slot. It really seems to be helping him and the team.

It's a little strange stacking Kirk and Green but the way Green has been playing paired with the way the Cardinals offense is designed, I don't mind it. Green may have one final good year before riding off into the sunset. Plus his price tag is great.

Under $6,000, Hubbard could be a week winner in week 4. With Christian McCaffrey on the injury report, Hubbard is lined up to get all of his volume. When CMC went down last season, the Panthers didn't change the game plan for Mike Davis. Instead, they just went with it and expected him to keep up. He didn't have the same production of course, but he was still an NFL DFS force. I expect very similar usage out of Chuba this week.

Tyler Lockett got a little banged up last week and is looking like he might miss this upcoming contest against the 49ers. I like Swain at his current price no matter what Lockett's game time status is on Sunday, but if Lockett is out, Swain just became a potential steal at his current price.

Hubbard again! Just go read the above portion on Hubbard. He's a great play this week.

This could be a wasted slot if you aren't rolling with the Stafford stack. However, if you are, you've just added a big play boom player for under $4k. Winning teams and fantasy points go together like peanut butter and jelly. It just works.

In DFS, you can't really stream defenses in the traditional sense of fantasy football. you can get great value by looking at all the defenses in several leagues being called stream targets though. These defenses are considered "streamable" because they aren't good enough to continuously roster but they are good enough to have a great matchup. Based on the builds I've constructed above, there's really only one defense that makes sense and is affordable for you.

The Packers play the Steelers this week with their beaten down quarterback and totally dismantled offensive line. Not to mention, Claypool seems to be on the injury list and both Johnson and Smith-Schuster are coming back from injuries. This Steelers team will be hard pressed to put up many points.

My personal favorite build from the above pieces are as follows:

That's it folks, that's the whole guide and breakdown. Good luck this week and come back for week 5 when we do this all over again!

Co-owner and editor of B3T Sports. I’ve been involved in the Fantasy Football community for over 8 years now. Over the past 2 seasons, I’ve begun writing fantasy football content, sports betting content and hosting 2 podcasts every single week!