We’re a third of the way through the season already. It’s been a rough year so far with injuries and some surprise underperformers. Though there’s still plenty of football left to play, some of you might be ready to start rebuilding. That could be trading off your older stars or trying to acquire some younger players. Fortunately I’ve found a couple trades here that cover just that! Convenient, I know.

First, trading away your older players. This poll here that I found on Twitter is from someone looking to move on from DeAndre Hopkins. Hopkins is 29, which isn’t incredibly old but definitely on the later end of things. He’s probably got a few years left of production but if you’re rebuilding, I’d try to move him this year while he’s still performing. That being said, don’t be desperate! Don’t just trade players to trade them. Definitely offer them up but make sure you get the right value for them.

So for this poll, it’s Hopkins for a 22 mid-1st. I still think it’s probably too soon to determine whether the pick is early/mid/late but that’s a topic for another article. So for now we can assume it will be a mid-1st which I do not think is nearly enough for Hopkins. Especially so given it didn’t specify whether it was a 2QB or SuperFlex league, so I assume it is not. (Note: This is one of many examples of why you need to be pretty specific when asking for trade advice).

Most people agree with me here but it was much closer than I thought. I don’t know for certain but I think the issue here is that people are putting too much emphasis on being in a rebuild. Just because Hopkins isn’t important to a rebuild, that doesn’t mean he’s not still a valuable player. If a mid-1st was all I was getting, I’d just hold. Hopkins might only be worth a 1st to them now, but that will change. Eventually someone is going to really need a starting WR and will be willing to pay up for him. I’d try to see if I could get a couple 1sts from a WR needy team at the trade deadline.

Now here we have a similar but different trade. The manager, who has said they are RB needy, is looking to pick up Travis Etienne for a 22 1st and a 23 2nd. The 23 2nd, especially in a 1QB league, is not worth a whole lot in my opinion no matter where the pick is (early/mid/late). Regardless, I still want the picks over Etienne for two reasons. 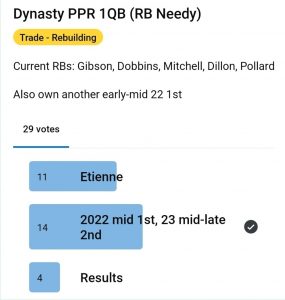 First, I think Etienne has a lot going against him for next year. Assuming he comes back okay from his injury, which is a big ask by itself, it’s not going to be a great RB situation. I have been a staunch James Robinson truther and he hasn’t disappointed in year 2. He’s the real deal and I don’t see him taking a full back seat to Etienne unless Robinson gets traded. So if Robinson stays, I think it’s going to be a full RB by committee. While this doesn’t help anyone for fantasy, this just seems like the better NFL move given Etienne’s injury and Robinsons extremely cheap contract. Add on Jacksonville’s dysfunctional coaching situation, and Etienne has a lot to overcome to be the star he was drafted to be.

Second, I really don’t think this manager is as RB needed as they say. Gibson and Dobbins are a pretty good RB pair to have in a rebuild. They are both young and have shown flashes of talent if they can get healthy. More importantly though in my opinion, if you’re rebuilding, you really can’t be RB needy. RBs are not the cornerstone of a rebuilding dynasty team. You need WRs and QBs that will keep playing 5-10 years over RBs that will be lucky if they get to 5. A lucky rebuild should only take about a year or two, but that’s halfway through a RBs productive years. Wait to get your RBs until you’re really ready to compete.

It’s also kind of an awkward situation when trading picks for young players. Especially for someone like Etienne with so many question marks and who hasn’t even played yet. They’re both dart throws so you’re not really making the transition to or from a rebuild like this. Again, if you’re getting a really good deal, go for it. I just think you’ll be hard pressed to find someone who recently drafted a player that is willing to move them already for more draft picks.