This week, I wanted to take a moment to talk about Cam Akers and a general trading strategy. First, the trade I found on Reddit was Cam Akers for a projected late 22 1st.

Obviously Cam Akers has been injured since the preseason and might not play at all this year. There are some rumblings that he might be back for the NFL playoffs but nothing certain yet. For the sake of fantasy though, it’s safe to assume he will not score you any points this year which is the key factor here. 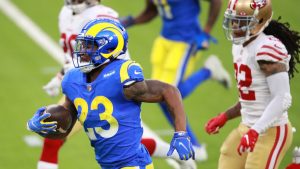 So while I think Akers is definitely worth the 1st, that’s not a great use of your draft picks if you’re contending. Buying young players is okay and sometimes beneficial as a contending team. The important thing though is you want young players that you think will eventually go up in value during the season. If you’re trading for young players as a contender, you obviously want players that you think will eventually score points (think Justin Jefferson or Ceedee Lamb from last year). Even if they don’t end up being starters for you, as long as they go up in value, you should be able to trade them for better starters than what you would have originally gotten.

The problem here though is that you really can’t do that with Akers. He’s not going to go up in value between now and the trade deadline because he’s not playing. No amount of hype posts on Instagram are going to increase his value enough at this point in the year. You might get lucky and be able to time it right, but with trade deadlines coming up, you’re better off trading for the player you actually want now.

Now rebuilding is a different situation because you have something very important on your side: time. You don’t need to score points. Akers is the perfect type of player to buy with a late first right now. He’s in this weird situation where his value could go up specifically between the fantasy playoffs and the NFL playoffs. Normally picks are around their lowest value this time of year, so I recommend holding onto them. Normally, if I am trading picks for players, I do it around the NFL draft or right before/during my fantasy rookie draft. Akers is just a very unique case where I think his value will go up more than the value of the pick over the next couple months. Even if you don’t trust his health situation and think he’s going to flop when he comes back. Once he gets the greenlight to play, you should be able to sell him then for more than just a late 1st. Someone is bound to get mixed up in the hype.