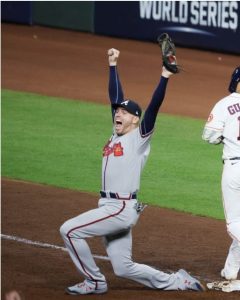 I won’t talk too much about it but I’ve been a Braves fan (and general Atlanta sports fan) all my life so this was a big win. Now with that out of the way, let’s talk about fantasy football.

I’ve got another trade that I responded to on Twitter but wanted to flesh it out a bit more in an article. In this trade, the poster is trading Dalvin Cook for Kareem Hunt, Josh Jacobs, Damien Harris, and Marquez Callaway. The trade seems pretty fair on the surface and I would be fine with either side. The Hunt and Jacobs injuries are definitely a bit worrisome but they should definitely play again this year so they still have value. You also typically lose player value when trading one for many but it really depends on the team setup. So as always, I asked for more information from the poster. They shared their current starters/team makeup (below). 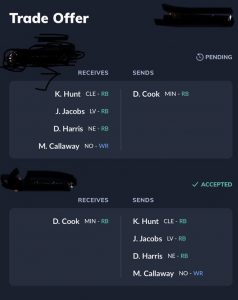 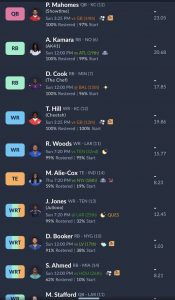 First, they are definitely a contending team with players like Woods, Jones, and Stafford. The RBs are also getting up there, though they are definitely still in their prime. This is also a fairly standard team set up: 1 QB, 1 SuperFlex, 1 TE, and 7 positions for RBs/WRs/TEs. So their depth pieces aren’t being stretched any more than normal. That being said, they have a pretty steep drop off in starter quality after their stars. I wouldn’t be too confident if Alie-Cox, Booker, and Ahmed were my regular starters on a contending team. They are fine players to have but they are definitely Bench stashes. The exception being Booker for as long as Saquon Barkley is not playing but who knows how long that will be.

Still, the moral of the story here is that this manager definitely needs some help in the depth department. So initially I was fine with either side of the trade but probably leaning the Dalvin Cook side without the extra info. Given the lack of depth though and that this is a contending team, I’ve definitely switched to the bunde side. This bundle should definitely be able to outscore their current starters which is the key takeaway here. The general term for this is “points above replacement”. Players like Marquez Callaway aren’t very exciting but he should pretty consistently outscore Salvon Ahmed each week.

Scoring points is very valuable when you’re competing. So as long as you aren’t losing too much age value (since it’s dynasty) you should definitely take trades that help you score more points. I know this seems obvious but it’s often something we overlook, especially when trading star players like Dalvin Cook. Cook might be able to score you 20+ points each week, but getting 3 or more real starters should more than be able to make up for it. If you are starting players that average 5 points a week, it might be time to try and find a bundle to trade for.

One other quick note for trades like this is to be cognizant over who you’ll have to drop to make room for the extra players you are getting. This person will have to drop 3 other players which all count towards your losses in the trade. This person was fine but there are situations, usually when trading for smaller value players, that you might be stuck dropping a player of equal or greater value which is not great. So for trades like these, I always try to see if I can move some of my other players for picks to get that space back. Don’t trade your real starters, but if I could add on Salvon Ahmed for a 3rd to this trade, it makes my life easier.