Welcome to Championship week!  Strategy changes a lot this week if you’re still alive.  For instance, you should spend all of your remaining faab to get the players you want/need this week.  You should also block your opponent by scouting their roster now and make bids for the players you think they want/need for next week.  You can drop any player that you don’t intend to start this week, especially any players that aren’t healthy.  You also need to be especially careful with any players you intend to start that play the Sunday night game or Monday game.  We’ve seen Covid strike numerous times this year and the last thing you want is to head into your Monday night game and find out Monday afternoon that your player will be out due to Covid, so make sure you have a pivot for all of your late game players this week.  Covid has screwed up enough things in 2020, don’t let it screw you out of a championship.  Think ahead!  Go one step further and pick up all of your opponents pivot options in case Covid strikes them on Monday.

*Note:  Faab recommendations are NOT listed next to each player this week because it’s time to pull out all the stops.  Go get your guy!

Jalen Hurts - 24/44 338 yards, 3 tds, 11 carries, 63 yards, 1 td - Hurts has been a stud since he stepped onto the field and I don’t expect that to change this week against the Cowboys.  He’s easily a top 10 starter this week at the position but his ceiling could be the #1 overall QB on the week. 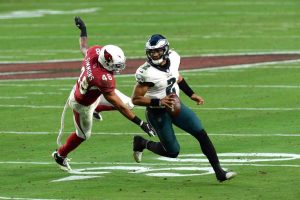 Mitch Trubisky - 15/21 202 yards, 1 td, 1 int, 8 carries, 34 yards - Trubisky has played really well since re-entering the starting lineup and he has the Jags this week so I don’t expect things to change now, especially with playoff hopes still hanging in the balance.  Also, if I’m the Jags I “rest” all my best players this week now that they are the front runner for the #1 overall pick.

Marcus Mariota - 17/28 226 yards, 1 td, 1 int, 9 carries, 88 yards, 1 td - It’s a touch matchup against the Dolphins but Mariota has rushing upside and that’s huge.  He also looked great last week when he was forced into action after Carr’s injury.  This time he will have a week of practice and preparation which hopefully will only help.

Tony Pollard - 12 carries, 69 yards, 2 tds, 9 targets, 6 catches, 63 yards - Pollard showed some real pop last week and if Zeke misses another game we may see this explosion again.  Pollard is dynamic with the ball in his hands, however he does have the Eagles this week and that is not an easy matchup.  If Zeke is out though, Pollard is a must start.

Salvon Ahmed - 23 carries, 122 yards, 1 td, 3 targets, 1 catch, 5 yards - If Gaskin is out Ahmed needs to be in your lineup.  23 carries last week against a tough New England defense and he averaged 5.3 yards per carry.  He’s a grinder and he gets the Raiders this week and this is a must win game for both teams. 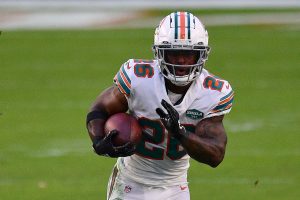 Darrell Henderson - 1 carry, -2 yards, 1 target, 1 catch, 5 yards - Henderson is on this list simply because Akers has already been ruled out for this week and he will get volume with a key matchup against Seattle but Seattle has a tough run defense.

Leonard Fournette - 14 carries, 49 yards, 2 tds, 5 targets, 3 catches, 16 yards - Only if Rojo is out.  Fournette was the first and second down guy last week and I expect the same if Rojo misses another game.  Best part is he faces the Lions and it doesn’t get much better than that in championship week.

Giovani Bernard - 25 carries, 83 yards, 1 td, 1 target, 1 catch, 14 yards, 1 td - Bernard was benched two weeks ago for fumbling early in the game and this week he is the bell cow.  Your guess is as good as mine but it’s hard to ignore 25 carries and 2 tds last week.  Factor in he has the Texans this week and seems like Bernard is a RB2 or flex this week.

Le’Veon Bell - 15 carries, 62 yards, 1 td, 1 target, 1 catch, 14 yards - CEH is done for the regular season which makes Bell the primary back and he’s starting to get warmed up in this Andy Reid offense.  The Chiefs have a tough run defense this week against Atlanta but Bell should still get volume.

Benny Snell - 18 carries, 84 yards, 1 td, 4 targets, 3 catches, 23 yards - Snell isn’t a guy that I feel good about but if you’re desperate and if James Connor is out then you can take a look at Snell, however keep in mind he has the Colts this week and that run defense if much better than the Bengals.

Lynn Bowden - 1 carry, 9 yards, 7 targets, 6 catches, 37 yards - PPR leagues only and the Dolphins have to throw the ball to someone.  Also this has a revenge game narrative but don’t expect Bowden to be anything more than a deep flex.

Emmanuel Sanders - 5 targets, 4 catches, 76 yards - With Mike Thomas on IR and Drew Brees back in the saddle again, Sanders becomes the defacto #1 WR. 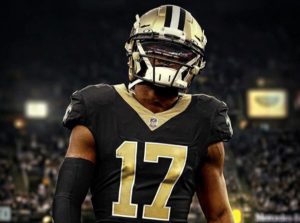 Russell Gage - 10 targets, 5 catches, 68 yards, 1 td - Gage has been good all year and if Julio misses another week then he is set up for success but it is a tough matchup against the Chiefs.

Keke Coutee - 7 targets, 5 catches, 53 yards, 1 td - Coutee has been really good since he was forced into the offense.  Take advantage of this week's matchup against the Bengals.

Tim Patrick - 4 targets, 3 catches, 14 yards - Last week was terrible for Patrick but I expect a bounce back game against the Chargers.

Tyron Johnson - 5 targets, 3 catches, 61 yards, 1 td - If Allen or Williams miss this game then Johnson is someone you can’t ignore.  He has produced when given the opportunity and he faces the vulnerable Broncos defense this week.

Chad Hansen - 3 targets, 2 catches, 55 yards, 1 td - Three targets is not ideal but he’s been consistently good in his three weeks and he faces the Bengals.  You could do worse but you better cross your fingers on this one.

Greg Ward - 5 targets, 4 catches, 15 yards, 2 tds - Ward has three touchdowns in 2 and a half games with Jalen Hurts so far.  I wish the target volume was higher and his role in the offense more prominent but it’s hard to ignore his connection with Hurts especially against the Cowboys this week.

Jakobi Meyers - 10 targets, 7 catches, 11 yards - Look I don’t trust starting a Patriots player in championship week but if you need somebody Meyers is the only pass catcher New England has right now and he has a plus matchup against the Bills this week.

John Brown - Brown hasn’t played in weeks and I’m not sure he plays this week either but if you need someone and are desperate then he could be a great waiver wire find especially if Diggs is hurt worse than reported.

Mike Gesicki - Gesicki didn’t play last week because he was banged up from the previous week but it seemed like he was close to suiting up.  The Dolphins are playing for their playoff hopes right now so if he’s healthy enough I suspect he will play.

Tyler Higbee - 5 targets, 4 catches, 67 yards, 1 td - You saw what Logan Thomas just did to Seattle right and that was with Haskins throwing him the ball.  Higbee is a great streamer this week but make no mistake about it, he’s boom or bust.

Dead to Me (redraft leagues only)