Congratulations!  If you’re reading this article then you must have won your opening week playoff game or had a first round bye.  Either way you’re moving on to round 2 and your chances of bringing home the championship are increasing each week.  So we’re going to do the same thing this week that we do every week at dynastprosfootball.com and that is to give you the best waiver wire pickups of the week and the confidence to drop those guys that just aren’t performing for you.

Jalen Hurts - 17/30 167 yards, 1 td, 18 carries, 106 yards - What an impressive win by the Eagles this week.  The Saints have not allowed a hundred yard rusher for over 50 games and this week they allowed two, Hurts and Sanders. If the Saints couldn’t slow down Hurts then there’s no reason to think the Cardinals can this week either.  Hurts has high upside potential so he’s worth an add and a start this week.  50% of your remaining faab.

Mitch Trubisky - 24/33 267 yards, 3 tds, 4 carries, 23 yards - Trubisky played great last week and there’s no reason to think he can’t do it again this week against the Vikings defense.  30% of your remaining faab. 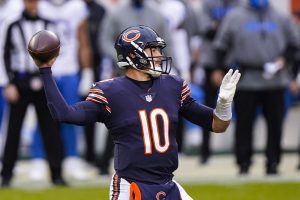 Gardner Minshew - 18/31 178 yards, 1 td, 2 carries, 22 yards - I don’t really want to play him against the Ravens this week but if you need a QB Minshew does have weapons and he can produce fantasy points.  Minimum bid only.

##Cam Akers## Priority Pickup - 29 carries, 171 yards, 3 targets, 2 catches, 23 yards - Yes you read that correctly, 29 carries for Cam.  This is exactly why I had Cam as my #3 rookie RB this season and I still may have been too low.  If he’s available in your league then Christmas came early this year.  100% of your remaining faab. 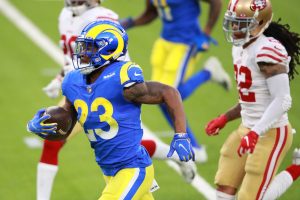 Lynn Bowden - 1 carry, 2 yards, 9 targets, 7 catches, 82 yards, 0/1 passing - Bowden has exciting offensive potential and it seems like the Dolphins are realizing that too after last week's nine targets.  Bowden is a better dynasty stash than redraft dart throw but the Dolphins need weapons right now so Bowden is worth consideration.  Minimum bid only.

Tim Patrick - 5 targets, 3 catches, 36 yards, 1 td - I’ve been saying this for weeks, Tim Patrick is a must own.  He continues to look like the best WR in Denver and he’s a touchdown scoring machine.  50% of your remaining faab.

Nelson Agholor - 9 targets, 5 catches, 100 yards, 1 td - If Agholor is still available in your league then it makes sense how you’re one of the remaining teams left but if you want to stay in the playoffs then you better consider picking him up.  40% of your remaining faab.

Keke Coutee - 2 targets, 3 catches, 24 yards, 1 td - Watson has to throw the ball to someone and Coutee potentially has the most talent of the available WRs outside of Cooks.  35% of your remaining faab.

Keelan Cole - 12 targets, 7 catches, 67 yards, 1 td - I expect Cole to have a resurgence if Minshew is the starter again. Cole continues to produce when given the opportunity this year.  30% of your remaining faab.

Laviska Shenault - 11 targets, 6 catches, 49 yards, 1 carry, 2 yards - I keep waiting for Shenault to have a huge game.  He continues to have good games but he needs to have that big game.  It’s hard to pass up eleven targets though.  25% of your remaining faab. 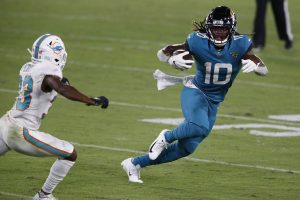 Chad Hansen - 7 targets, 7 catches, 56 yards - Like Coutee, Hansen is a benefactor of the Texans thin depth at WR.  With that being said he has been incredible the last two weeks and is worth an add.  20% of your remaining faab.

Marquez Valdes-Scantling - 6 targets, 6 catches, 85 yards, 1 td - I’m only mentioning him because I believe in being thorough.  He’s not a guy I trust so take this with a grain of salt.  Minimum bid only.

##Robert Tonyan## Priority Pickup - 5 targets, 5 catches, 36 yards, 1 td - If he’s there don’t waste anymore time and get that bid in now.  He’s scored a touchdown four straight weeks and has nine on the year.  The list of pass catchers with nine touchdowns or more this year is very short.  100% of your remaining faab.

Logan Thomas - 7 targets, 6 catches, 43 yards - I can’t believe this guy isn’t owned in some leagues. Take advantage of this and make a waiver claim even if you don’t need him just to keep your opponent from using him against you.  Thomas has 76 targets on the season and Washington needs weapons.  50% of your remaining faab.

Mike Gesicki - 6 targets, 5 catches, 65 yards, 2 tds - We may finally be seeing Gesicki’s emergence into a top fantasy TE.  If he’s available and if he’s healthy (got banged up late) then he is a high upside tight end.  50% of your remaining faab.

Eric Ebron - Ebron’s game wasn’t over at the time this article was written but he continues to get volume and volume is king in fantasy football.  30% of your remaining faab.

Irv Smith - 4 targets, 4 catches, 63 yards, 1 td - I believe Irv has a huge long term upside but for now he’s a spot starter but well below the other guys ahead of him on this list.  20% of your remaining faab. 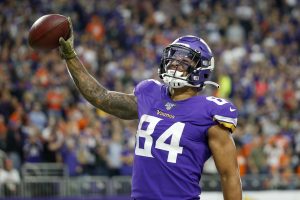 Cole Kmet - 7 targets, 4 catches, 41 yards - Kmet has been more involved in the offense the last three weeks and the Vikings are on tap now.  10% of your remaining faab.

Will Dissly - 2 targets, 2 catches, 23 yards, 1 td - Dissly is a forgotten player at the tight end position but you need to keep him in mind.  I think he’s getting closer to being back to the player he was at the beginning of last year (prior to injury) and you will want that guy on your team.  Minimum bid only.

Dead to Me (redraft leagues only)

Cam Newton - I guess Superman can lose his powers

Sam Darnold - You don’t really own him do you

Giovani Bernard - I don’t care if Mixon is still out

Jakobi Meyers - Have you seen Cam throw the ball

Josh Reynolds - Nope, not going to do it

Darius Slayton - Too boom or bust for me in the playoffs

Austin Hooper - Health too big of a concern

Higbee/Everett - You’re better than this