The Value of Backup RBs in Dynasty

Before we begin, all your contending teams do want a couple true lead backs to carry the load a majority of the season. The following players are not players that you need to get by on a week to week basis but situationally can give you some huge upside at a very low cost. These backup RBs are commonly picked in the middle rounds by savvy drafters in redraft leagues knowing they are one injury away from being the starter and possessing a huge upside. The strategy of drafting a player and his backup, also known as handcuffing, is a good way to have insurance against an injury to your early round RB. While I do believe in handcuffing for contending dynasty teams, you should also be grabbing other backups as well. This may seem like a strategy that only helps contending teams but the ability to flip them if their start goes down is a great way to improve asset value, it makes me love grabbing backup RBs in rookie drafts when rebuilding. I got to flip Khalil Herbert into a slow starting Amon-Ra St. Brown to flip for Aiyuk and a late 1st. 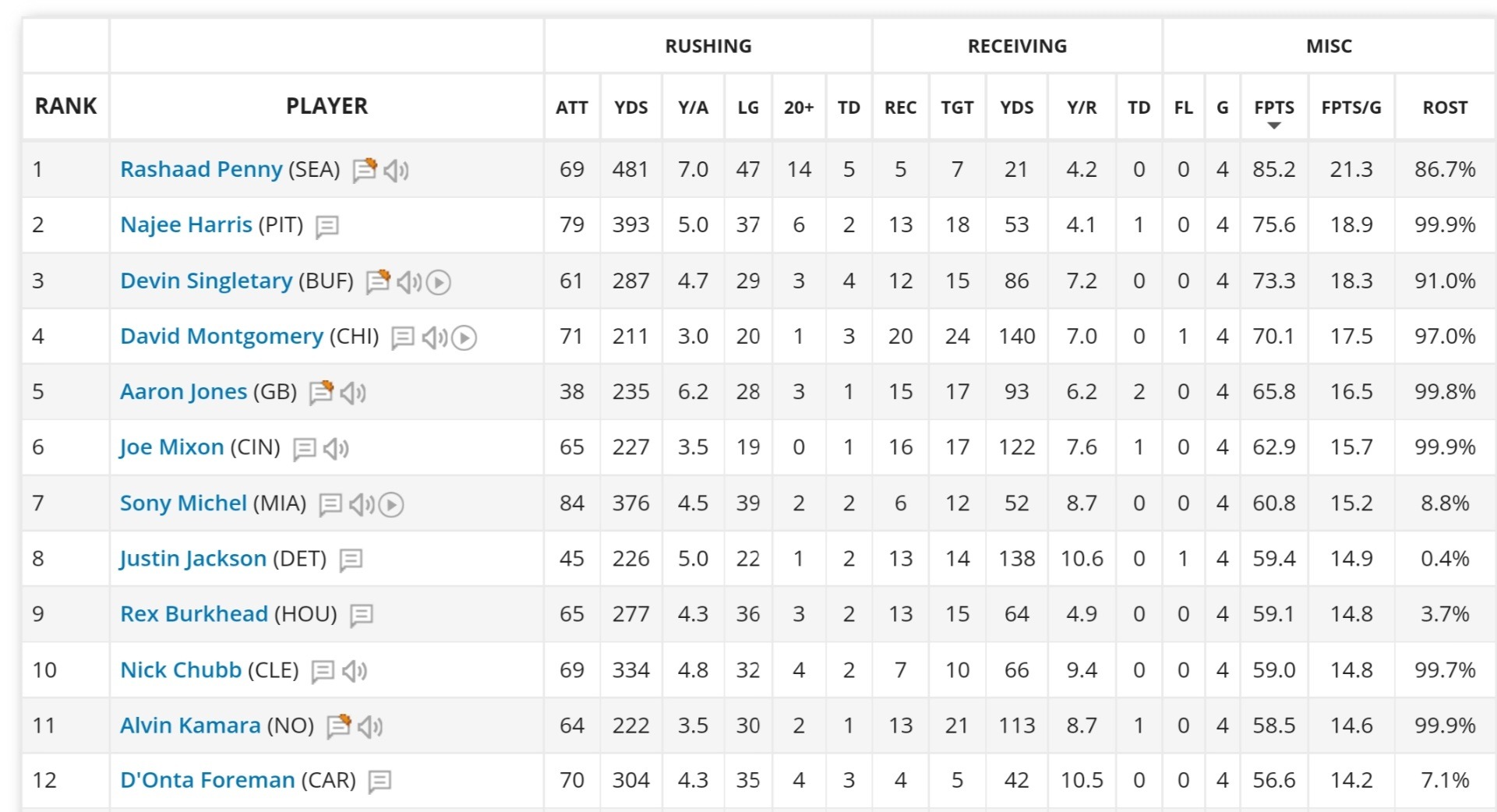 Let’s look above at the top 12 RBs from weeks 14-17, which covers most, if not all playoff weeks for your league. You will see some usual suspects up there. You will also see some names that were not selected early in startups or redraft leagues last year. Penny, Singletary, Michel, Jackson, Burkhead and Foreman were all RB1s at the most critical point of your season despite not being drafted as the first back out of their backfield. Many of them could have been acquired for next to nothing and could have helped you bring home the championship after you lost CMC and Henry early in the season. Some even have the upside of having their situation change going forward. A great example from the past was if you jumped on Austin Ekeler as the backup to Melvin Gordon, you managed to get a piece that will help you long term. Rashaad Penny could fall into that camp if he can hold off Kenneth Walker III but I don’t think I’m optimistic about that point. We do have some candidates for next season though.

There are four different types of RB situations we need to consider.

Backfields with No Clear Backup

The worst kind of backfield to weed through are ones where we really aren’t sure what would happen if a back went down. Think about the Pittsburgh backfield or the Tennessee backfield. Guys I like to buy in this camp are the ones that cost me the least to acquire and may even just be waiver wire adds. Chris Evans for the Bengals is a name I like here, showed some flashes last year and he only has to beat Perine for the backup spot. Another guy that was free over the offseason was Eno Benjamin and now with Darrel Williams potentially being cut, he could find some time in the Chase Edmonds role from last season. An example of a guy like this hitting was last year with Elijah Mitchell becoming the lead guy in San Francisco. In my experience the Shanahan offense is always like this. We fight over two guys all summer and then someone off the radar is the lead guy in the backfield.

Backfields with a Clear Backup

Some RB situations fall into multiple categories. There are some backs here that are also in a competition or may be useful on a weekly basis. This is also the handcuff range of backs. Handcuffing is the best way to protect an investment in one of these stud RBs. If you are roster D’Andre Swift, I would be looking to roster Jamaal Williams, if you roster Zeke, time to go get Pollard. These are just excellent pieces to add to trade if your trade partner is looking to rebuild. I like to have two high end backs then as many high upside guys as I can behind that. The season gets messy and having more guys that could be the guy gives you an edge when big names start to miss games.
Alexander Mattison used to be part of this camp, I do think that has become one of those murky backfields at this point. Ty Chander and Kene Nwangnu seem to both have a chance to take the backup role with the new coaching staff up in Minnesota. He does enter free agency next season though so that should be a consideration. I worry with the 2023 class that there may not be many open seats for this upcoming offseason.

Backfields with an Open Competition

Some backfields are far from clear cut entities at this point. A great example is the Miami Dolphins backfield. Chase Edmonds got the big pay day this offseason but curious enough he is not the back I’m most interested in from that backfield. I see Edmonds being a guy you may be able to use because of his pass catching ability but I would be targeting Mostert here. He has played in this offense with Mike McDaniel in San Francisco and had great fantasy success in it. Sony Michel was serviceable mostly due to sheer volume in LA then found himself losing reps to Cam Akers who had just torn his achilles a few months prior.

Another interesting backfield this offseason had been the New England Patriots. We assumed all summer that Damien Harris would be the starter but it appears Rhamondre Stevenson may be taking that role. This backfield feels too risky for my blood since neither guy seems to have a true backup discount. If you feel like you have a read on a Patriots backfield, by all means take a stab. I feel like I’m always a week too early or a week too late to start Patriots RBs so I will probably just fade the backfield.

I would be doing a disservice to not mention Isiah Pacheco here, you can find further analysis on him by Joe Goodwin right here:

Isiah Pacheco: The “IP” Address To Remember During Your Draft

Pacheco has lost his backup discount entirely and is now slowly taking more and more value from CEH in dynasty leagues. He does have league winning upside being in that Chiefs offense though and sometimes you have to pay up to win the championship.

Backfields where You can use Both Backs Weekly

Finally we have this special category of guys that you can use in flex spots to get through bye weeks but also have massive upside if anything ever happens to the start. Guys like Kareem Hunt, Melvin Gordon, Tony Pollard and A.J. Dillon are the backs we are talking about here. These guys are truly special and I think great buys for your contending teams because not only will they help you get through bye weeks and injuries to your fantasy team, they also have absolutely massive upside if the starter goes down. A couple other names I like here, Tony Pollard, Jamaal Williams, and Michael Carter. All these guys are pretty easily acquired, can be used weekly, and have massive ceilings if the starter goes down.

I don’t like to assume injury, many of these players will not generate a return on your investment. The cost of many of them is less than a 2nd round pick a lot of the time. Picks that are frequently overvalued in the dynasty community. Using these picks for these potential league winning pieces is not a comfortable thing to do but can solidify your roster for the brutality that is the NFL season. Don’t be the guy having to offer 1st round picks at the trade deadline for guys you can buy for a 3rd now. Go out there, buy these high upside assets and go win your championship!