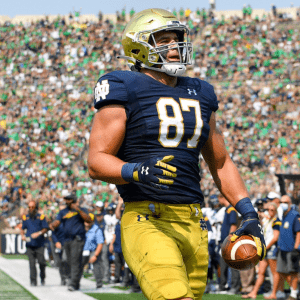 A name to watch with your 2023 rookie picks is Michael Mayer. Mayer is going into his junior season at Notre Dame who is known for cranking out TE talent to the NFL. He is a former 5* recruit who was the #2 TE in his class coming out in 2020. At 6’4 250, he burst onto the scene as a true freshman at Notre Dame in an offense led by Ian Book and now Pittsburgh Steelers WR Chase Claypool. This past season as a sophomore he became the focal point of the passing game, reeling in 71 receptions for 840 yards and 7 TDs.

What is exciting about Mayer’s talent is he’s an excellent route runner so LB’s can’t cover him. That means corners and safeties have to cover him when he splits out wide or in the slot where most are giving up 4-5 inches and 60 lbs to him. In short, he’s a mismatch nightmare. Cut from the same mold of the elite TEs of the past 10 years akin to Gronk, Kelce, Kittle, Waller.

A vital part of Mayer’s game is that he can block as well which will keep him on the field as a rookie. This will allow him to be on the field on 1st and 2nd downs where he can line up as a traditional TE and exploit LB matchups via play action. It also makes his red zone appeal more interesting as he can leak out after initially blocking because defenses will see him as a valued part of establishing the edge in the running game.

We all know TE is a hard position to lock down in dynasty football with the position being so top heavy. Michael Mayer is someone I would be very eager to spend my coveted 2023 1st on.