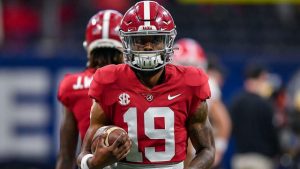 Jahleel Billingsley was a 4* recruit in the 2019 class when he received a scholarship offer to play football for Nick Saban and the Alabama Crimson Tide. At 6’4 230lbs, Billingsley offers the hybrid body type of the new age NFL TE. He played sparingly as a freshman, but after a promising sophomore season in 2020 he entered his junior year on the John Mackey preseason watch list.

This is where things go sideways as during spring camp leading up to the start of the 2021 season, coach Saban didn’t care for Billingsley’s effort in practice. As a result he was moved down the depth chart in place of backup TE, Cameron Latu. Billingsley stuck it out for the rest of the season but never reclaimed the starting role.

Following the 2021 season, Billingsley transferred to Texas to play for former OC Steve Sarkisian. This move excites me because Billingsley needs a fresh start. He also will be allowed to play more of a true receiving role with Texas because the UT WR room doesn’t carry as much depth as Alabama’s outside of Xavier Worthy.

While he doesn’t offer the same ability to get in a stance and block like a Michael Mayer, he isn’t incapable of it. What excites me about Billingsley is his athleticism and speed at the TE position he presents is the way the NFL is transitioning.

Sarkisian clearly believes in his talent and has a plan for him in this offense. I’m looking for Billingsley to regain the promise he flashed in 2020 at Texas this season and be talked about as a top TE talent in the 2023 class once again.

Will he do enough to be worth a 2023 1st? Most likely not. He has a chance however to rehabilitate his image ahead of the 2023 draft and become a very good value pick in rookie drafts near the back end of round 2 and potentially even the beginning of round 3 with how deep this class is shaping up to be.