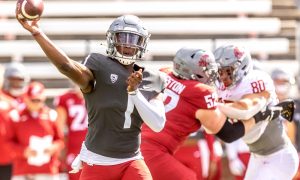 Cameron Ward threw for 6,908 yards and 71 TDs in two seasons at the FCS level at Incarnate Word.  In his freshman season, Ward won the Jerry Rice Award, which is given to the top freshman in FCS.  In his sophomore season, he was named 2nd Team All-America and was a finalist for the Walter Payton Award, which is given to the top overall player in FCS.  Ward then transferred up to Washington St in the offseason, where big things are expected for him.

There is some division amongst people in regards to Cameron Ward.  There are those who think Ward is not a legitimate NFL prospect due to the scheme he played in at Incarnate Word and the lack of competition he played against.  Some may also point to the fact that he may have developed some bad habits due to having to overcompensate for a lackluster offensive line.

I am of the opinion that Ward is a superstar in the making.  With his jump up to FBS this season after transferring to Washington State, he will now be able to showcase his skills to a much broader audience.  His big arm combined with his creative ability make you think of Patrick Mahomes…not saying he will be Patrick Mahomes, but he reminds me of him.  If he can clean up his understanding of pre-snap conditions and improve his footwork, Ward can shoot up draft boards this season.