The 5 Best Fantasy Destinations for Raheem Mostert After Trade Request 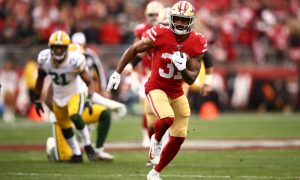 Wednesday afternoon, San Francisco 49ers RB Raheem Mostert requested a trade after contract negotiations were “unproductive.”  Mostert became the 49ers lead back last season after Matt Breida went down with an injury in week 10 against the Seahawks.  He led the team with 772 yards and 8 TDs on the way to a Super Bowl LIV loss to the Kansas City Chiefs.

Mostert was somewhat of a late bloomer.  As a rookie in 2015, he was seen on four rosters (Eagles, Dolphins, Ravens, and Browns).  In 2016, he was on three more (Jets, Bears, and 49ers).  Now, the 28 year old veteren is seemingly on his way out of San Fran and there are a few options for him and the 49ers...but, where is he a more valuable fantasy asset?

If it ain’t broke, why fix it?  Raheem Mostert and the 49ers have proven to be compatible while on the football field.  The last eight games of the 2019 season...including the playoffs...Mostert ran for 715 yards and 11 TDs on 117 carries (6.11 ypc).  That included a playoff outburst of 29 carries, 220 yards, and 4 TDs in the NFC Championship game against Green Bay.

Obviously, a return to San Francisco would mean a new contract would need to be in place to satisfy Mostert.  Maybe the publicness of his request could be a ploy to force the 49ers to step up and offer him what he deems as fair.

Tom Brady will be 43 years old at the start of the season, and isn’t getting any younger.  His final season with the New England Patriots displayed his need for run support.  Enter Raheem Mostert.  Mostert would instantly be the best RB option for the Bucs as they look to make a run in the NFC South.

The J-E-T-S Jets are an interesting pairing.  They signed Le’Veon Bell last season and are trying to become relevant in the AFC East, that has recently lost the aforementioned Tom Brady.  The preseason favorite to win the division are the Buffalo Bills, but a big offensive season by New York could put them in the thick of it.  Acquiring Raheem Mostert could go a long way in that pursuit.

Also, it could make it easier for the Jets to eventually part with Bell, who is owed $13.5 million in 2021 if carried on the roster.  New York has an out after the 2020 season, with only having to deal with a $4 million cap hit.  Could a reunion with Raheem Mostert be in the cards?

The Falcons are only a few years removed from an appearance in the Super Bowl.  Their potent offense could make them a contender sooner rather than later.  Matt Ryan and Julio Jones have been an elite QB/WR combo over their careers together.  With WR Calvin Ridley and newly acquired TE Hayden Hurst (former 1st round pick), Atlanta has the weapons in the passing game.  Pairing Todd Gurley, who is only on a 1-year deal, with Raheem Mostert could be lethal.

Todd Gurley has documented knee issues, so a safety valve like Raheem Mostert would be significant.  The Falcons have shown the ability to run two RBs with efficiency.  Remember Devonta Freeman and Tevin Coleman (Mostert’s teammate in SF)?

The Chargers are going to need to rely on their running game this season...poor offensive line and all.  LA is going into the season with veteran QBs Tyrod Taylor and rookie Justin Herbert, but neither should inspire much confidence, at least early on in the season.

RB Austin Ekeler proved to be a fantasy stud last season, but many people doubt his ability to hold up as a bell cow back.  The Chargers already have Justin Jackson and rookie Joshua Kelley, but Raheem Mostert would be an upgrade.  Mostert would provide Los Angeles with a viable option at RB to pair with Ekeler.