From the moment the 49ers traded up to 1.3 all we have heard is how Mac Jones is going to be the pick. I happen to believe this is one of the biggest smoke screens we have seen in recent memory and below I breakdown why Mac Jones will NOT be the pick at 1.3.

Many people are comparing Mac Jones to Matt Ryan or even Kirk Cousins and making the connection that since Kyle Shanahan coached those guys and was successful then Mac Jones must be the pick. We have even heard the analogy that Shanahan wants a “joystick” quarterback and he will be the “controller”. Although that analogy certainly makes sense, I don’t believe it for a second. Keep in mind Shanahan also coached RGIII and that worked out pretty well too with RGIII winning Offensive Rookie of the Year honors. 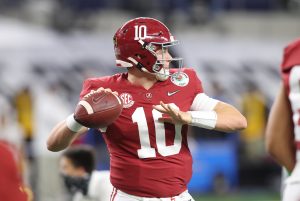 Kyle Shanahan is one of the top offensive minded coaches in the NFL and to put it quite simply, if your quarterback can both throw the ball and run the ball it opens up so many more possibilities. The pocket quarterbacks are becoming a thing of the past and while there are still exceptions (Brady, Ryan, etc) the NFL is transitioning to mobile quarterbacks and the pocket passers are now dinosaurs. Many of the top quarterbacks in the game today are considered either dual threat quarterbacks or at the very least mobile quarterbacks. You have guys like Josh Allen, Lamar Jackson, Russell Wilson, Deshaun Watson, Dak Prescott and the list goes on and on of the top quarterbacks in the game today and most of the top guys are dual threat players. Even players like Mahomes and Rodgers are mobile quarterbacks. No they are not going to run for 1,000 yards in a season but they can certainly create plays and avoid pressure two things I’m not so sure Mac Jones can do consistently.

Think about it like this, if you were drafting a running back would you want a running back that can both run and catch or just a run? The same logic applies to your quarterback. Even if you don’t plan your offense around a running quarterback, just the possibility that he could use his legs will open up the offense and force the defense to account for this possibility. Last year we witnessed a similar scenario from another offensive genius in Sean Payton. When Drew Brees went down with an injury everyone naturally assumed that Jameis Winston was going to be the starter. Former #1 overall pick with a 5,000 yard passing season but no, Peyton turned to Taysom Hill, dual threat quarterback. Again the dual threat guys are very intriguing for offensive minded coaches and I think Shanahan feels the same way.

A few years ago, we witnessed the NBA game completely transition from high percentage two point shots to now everyone playing three ball. You can thank the Golden State Warriors for playing such a pivotal role in this change. Well, we are witnessing the same thing in the NFL right now. If you do not have a mobile quarterback you are at a distinct disadvantage. Gone are the days of players like Peyton Manning, Tom Brady and Drew Brees. Sure, every once in a while a player like that will come around but the vast majority of the college quarterbacks coming into the league now are dual threat guys and if college coaches are developing those types of players then the NFL will be flooded with them and that is exactly what we have seen over the last few years.

Another point I want to make is why has there been so much talk about who the 49ers were going to select with that pick. There is not one single advantage that I can think of for the 49ers to leak that information if they do in fact want Mac Jones, however there is an advantage to leak that information if they do NOT want Mac Jones and they want to ensure the Jets do not take their guy. In fact every draft season there are numerous smoke screens and rumors that we later find out had no merit behind them at all. Since John Lynch and Kyle Shanahan were hired in San Francisco, the 49ers have been very quiet about their plans and intentions each season and then all of a sudden they make one of the biggest trades in franchise history and they leak who they are planning to draft. It doesn’t all add up. 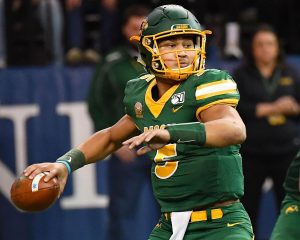 I also think we have also already seen Mac Jones’ ceiling while we are not anywhere close to witnessing the ceiling of either Justin Fields or Trey Lance. Mac Jones had a phenomenal season last year but keep in mind he played for a college team that is often compared to an NFL program with potentially two top 15 pick wide receivers, potentially the top running back to be drafted this year as well as a dominant offensive line. Every single week that Mac Jones stepped onto the field last year his team was at an advantage in terms of talent and coaching. That will not be the same in the NFL. Yes the 49ers have a good offensive line, skill players and a great coaching staff but Mac Jones is not going to be able to sit in the pocket without any pressure and pick apart NFL defenses. Mac Jones does have talent but I’m sorry he has no business being considered the third best quarterback in this draft let alone a top 3 draft pick.

Justin Fields has proven his toughness by only missing two total snaps in his two years at Ohio State and what is the reason again on why the 49ers are drafting a quarterback, oh yea that’s right, because their guy can’t stay healthy. Fields has also led a big time program for the last two years and his work ethic and leadership are lauded by coaches and teammates. His college coach Ryan Day had this to say about Fields on the Move the Sticks Podcast “I said to the coaches he’s 6’3”, 225lbs, smart, really really accurate, can we coach”? Well I think Shanahan can coach and if anyone can help Fields reach his ceiling it is Shanahan. 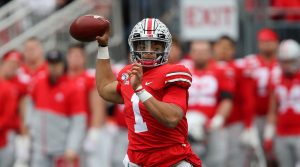 I believe the 49ers are targeting either Justin Fields or Trey Lance. In my opinion both guys are going to be fantastic players in the league and either player would be an amazing pick for the 49ers. Also both players would gain valuable experience sitting behind Jimmy Garoppolo for a season or at least a partial season. But if we connect the dots I believe Justin Fields makes the most sense for the 49ers based on all factors considered and I think he will be the pick at 1.3.