Fresh off their 1st division title since 2008, the Tennessee Titans will attempt to take the next step up to Super Bowl contenders in 2021.  Their 11 wins are also the 1st double digit wins season since 2008, when they went 13-3 and lost in the AFC Divisional round.  Head Coach Mike Vrabel is the most successful HC since Jeff Fisher, going 29-19 in three seasons.  However, he is replacing Offensive Coordinator Arthur Smith, who left to take the HC job in Atlanta.  Todd Downing was promoted from TE Coach to OC this offseason, and he will continue to run the same system that was in place under Smith.  Downing had previous OC experience with the Raiders in 2017, so the promotion should not be too much of an adjustment for him.

The Titans are replacing a few key contributors from last season’s team, as they lost WR Corey Davis, WR Adam Humphries, TE Jonnu Smith, and OT Dennis Kelly.  Replacing them are WR Josh Reynolds, WR Dez Fitzpatrick, and OT Dillon Radunz.  Davis, Humphries, and Smith left behind 192 targets from 2020, so their replacements will have big shoes to fill if Tennessee wants to become an elite team in 2021.

Tennessee didn’t have a ton of draft picks this year, but they did a good job of balancing offense and defense with their 8 picks.  The headliner was the 22nd overall pick CB Caleb Farley out of Virginia Tech.  A lot has been said of his back issues (two surgeries, the most recent in March) leading up to the draft, which caused him to fall to 22 for the Titans.  If healthy, Farley could be a lockdown CB1, in a division that includes QBs Deshaun Watson (for now anyways), Trevor Lawrence, and Carson Wentz. 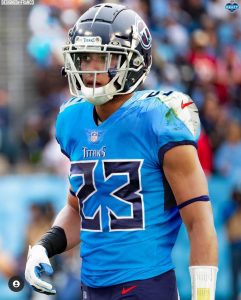 OT Dillon Radunz was one of the top linemen available this year, and Tennessee was able to snag him with the 53rd overall pick in the 2nd round.  That could be looked at as a steal in a few years.  He will take over for the departed Dennis Kelly and should help protect Ryan Tannehill and pave the way for Derrick Henry.  Radunz is not unfamiliar with blocking for high-caliber QBs, as Trey Lance was his teammate at North Dakota State.

My favorite pick of the Titans came in the 4th round, when they scooped up WR Dez Fitzpatrick out of Louisville with the 109th overall pick.  Fitzpatrick, 6’2 209lbs, ran in the 4.4’s during his pro day and should have a decent upside for the Titans in 2021.  In 2020 at Louisville, he had 43 catches for 833 yards and 3 TDs, in a somewhat underutilized role. Already 23 years old, Tennessee shouldn’t have to wait long for him to physically mature enough to contribute. 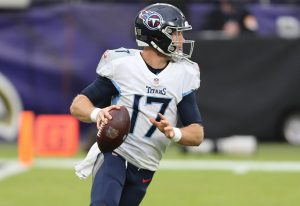 Ryan Tannehill is entrenched as the Tennessee Titans franchise QB now, after signing a massive deal which included $62 million guaranteed before last season.  Tannehill didn’t disappoint, as he threw for over 3,800 yards and 33 TDs...and ran for another 7 TDs...in 2020.  The former 1st round pick of the Miami Dolphins originally arrived in Tennessee as the presumed backup to then QB Marcus Mariota.  However, inconsistent play by Mariota mixed with Tannehill’s ability to win games put him in the QB1 position for good in Nashville.

The Titans need Tannehill to be a Pro Bowl caliber QB again in order for them to reach the Promised Land.  He has definitely seemed to figure out how to play in the NFL since leaving behind the Dolphins and Adam Gase.  He should be targeted as a back-end QB1 or high-end QB2 in all fantasy formats. 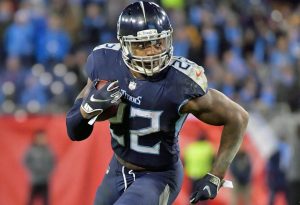 Derrick Henry became the 2nd Titan (Chris Johnson) the 8th RB in NFL history to run for over 2,000 yards in a season in 2020. Can he do it again with an extra game on the schedule? It's a possibility, but I'd say not likely. The wear and tear on a RBs body eventually takes its toll, but Henry is a very rare breed. He has proven to be a durable thoroughbred for Tennessee, and they will continue to ride him for as long as they possibly can.

Henry is a bonafide stud that should be considered a top-5 RB in all formats, despite not being a prime target in the passing game. In 2020, he finished as the RB3 in full PPR leagues, even with only 19 catches. In .5 PPR and standard leagues, he was the RB2 and RB1 respectively. 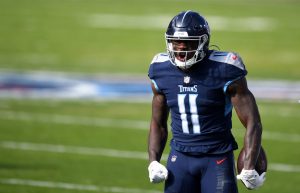 In 14 games last season, AJ Brown saw 106 targets.  Let’s assume he plays all 17 games in 2021.  How many targets could/should he get with Corey Davis and Jonnu Smith out of the picture?  I don’t foresee another pass catcher getting 100+ targets in this offense (Corey Davis was 2nd on the team with 92 looks in 2020).

Brown may very well be the overall WR1 in dynasty leagues, so envisioning him with close to 150 targets is not unreasonable.  With the lack of a true WR2 on the roster, Brown will be leaned on heavily in the pass game and should be a perennial Pro Bowler and potential All-Pro moving forward. 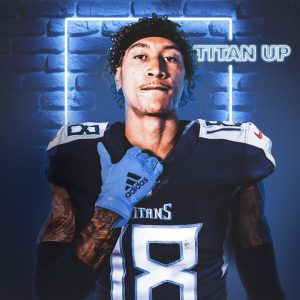 A new addition to the Titans, Josh Reynolds displayed plenty of ability while with the Rams.  He was just below some big time WRs on their depth chart.  Now in Tennessee, Reynolds should be considered their WR2. Last season in Los Angeles, Reynolds caught 52 balls on 81 targets for 618 yards.  That type of production should translate well as a possession receiver in Nashville. 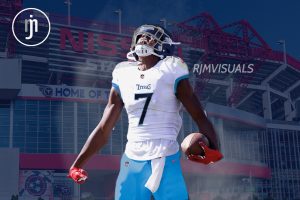 Another newcomer to the Tennessee roster is rookie WR Dez Fitzpatrick.  The former Louisville Cardinal was drafted in the 4th round and was a very good prospect early on in college with QB Lamar Jackson throwing him the ball.  Fitzpatrick has good size and speed, but will need to sure up his hands in order to make an impact in the NFL.  I think with a good NFL QB and coaching staff, he will do just that. 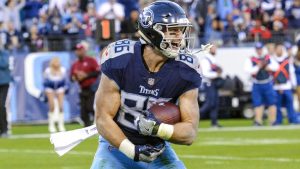 Jonnu Smith left Tennessee to join the New England Patriots, leaving behind a void at the Tight End position for the Titans.  Anthony Firkser performed well as a backup pass catching TE last season, but his ability...or lack thereof...to block has many wondering if he will see enough snaps.  Geoff Swaim is much less of a receiving threat, but a solid enough blocker to get on the field in Tennessee’s run-heavy offense.