Do you zig or zag in the middle of a positional run during your draft? We’ve all been there in a draft: A spot where we notice a run of quarterbacks are being drafted in a super flex. And a decision must be made. Do I take the highest rated quarterback to ensure I have the position filled? Or, do I stick to my rankings/tiers and take the best available?

And I have an unpopular opinion: FILL THE POSITION!

Yes, I am aware many “experts” will tell you that taking your highest tiered/ranked player will ensure your maximum points potential each week and potentially open up value picks later in the draft. However, that theory in drafting does not always come to fruition. In fact, I am here to say that those value picks turn into drafting the likes of Justin Fields, Jared Goff, and Mac Jones later in drafts to fill your quarterback needs. Those picks may yield mediocre results week to week, and they seldom lead to championship caliber teams. When’s the last time a team won your league with a name like that starting at quarterback?

Instead, I propose following the flow of the draft and drafting that low end QB1 during that positional run and zig with the league.I will use my last superflex draft I participated in as an example of this theory. The team drafting in the 11 spot saw 7 quarterbacks drafted in round 1. So Team 11 drafted Christian McCaffery in round 1, Justin Jefferson in round 2, and Derrick Henry in round 3. An amazing start! However, Team 11 didn’t address the quarterback position until round 6, where he drafted Ryan Tannehill. Up till that point, 20 quarterbacks had been drafted and Team 11 did not take part in the “run” on drafting quarterbacks early. 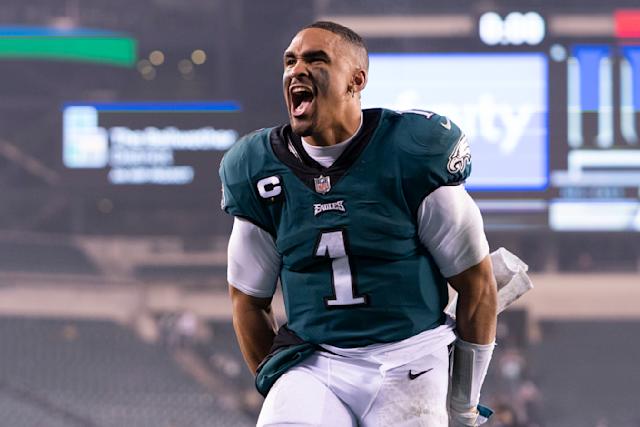 Draft a low end QB1 in round 1 (I will use Hurts for this experiment). Then still take Jefferson in the 2nd, Henry in the 3rd and Fournette in the 6th round as the flip to Tannehill to complete the QB, RB, RB, WR grouping.

This example illustrates the trade off value between CMC and Fournette with Tannehill and Hurts. This exchange gives Team B an extra 2.6 points per game.

Will 2.6 points a game make a difference per game? Personally, I have lost plenty of fantasy games by 2 points or less. So, I’ll take the 2.6 points extra per game and be grateful to have zigged with the draft rather than zagged and had less points and potentially lose a weekly match up.