I should preface my title by stating I am not going to write about Bijan Robinson, Bryce Young, or TreVeyon Henderson in this article.  Those names are at the top of most lists.  And, honestly, I don’t think you need to know about the best players in college football being targets in a Devy league.

Instead, I am going to share a few names of players that can be drafted outside the Top-5 of your Devy league draft that could be the next BIG names in the NFL. 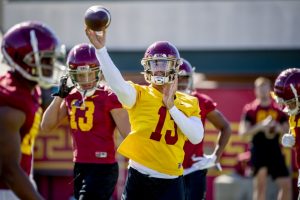 So why does that name sound familiar??? He’s the quarterback that left Oklahoma to follow Lincoln Riley to the Trojans.  Although following a coach to his new destination seems reasonable, in this situation, it was basically out of necessity.  Coach Riley has mentored Jalen Hurts, Kyler Murray, and Baker Mayfield.  Caleb Williams realized the last 3 QBs Riley has had under center are all currently starting QBs in the NFL and he wants to be the next.

Coming out of high school, Williams was a 5-star recruit, the #2 ranked QB, and the #7 overall prospect.  His H.S. scouting report compared him to Dak Prescott and projected him as an NFL first round pick.

Caleb Williams’ skill and potential are evident and he is well worth the investment in your Devy draft.  Caleb is still 2 years away from being draft eligible, but is an elite level QB talent that should be one of your top targets in your Devy Draft. 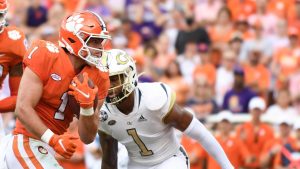 Just like Caleb Williams, Will Shipley was also a 5-star recruit coming out of high school.  Shipley has typical running back size at 5’11 and 205 lbs.

In his freshman year, Shipley ran for 739 yards for 11 touchdowns and caught 16 passes.  HIs pass catching ability was under-utilized last year, but is expected to be more utilized this year.  Although these numbers may seem underwhelming, Shipley didn’t get substantial playing time until game three for Clemson.  With the starting role firmly in his grasp, Shipley has the ability to make splash plays every week and may even get Heisman talk if Clemson is in the national title hunt.

Shipley currently gets compared to Joe Mixon.  However, if his pass catching ability develops this year as expected, I anticipate comparisons to Christian McCaffrey to surface; both are also listed at the same height and weight.

Will Shipley will have every opportunity to become a top tier running back and he may even hear his name mentioned in the same breath as Bijan or TreVeyon.  Draft him before the 2nd round ends in your Devy draft and wait for this investment to pay dividends. 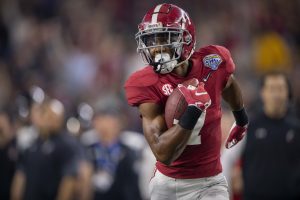 Full Disclosure, Brooks was a massive target of mine in our recent DynastyProsFootball Devy startup draft and I played with fire and waited to draft him.  And I missed out!  To be fair, I was able to grab Donovan Edwards in the third round and waited on him.  Well, that may be a decision that will haunt me for a while.

Ja’Corey Brooks was also a 5-star recruit out of high school.  And Alabama has proven over the last few years, that they are good at identifying and developing wide receiver talent.  The likes of Calvin Ridley, Jerry Jeudy, Julio Jones, Jaylen Waddle, DeVonta Smith and Amari Cooper are evidence of that pipeline to the NFL.

At 6’2, 196 lbs, Brooks has all the measurables the NFL wants and he has garnered comparisons to Courtland Sutton.  In his first year at Alabama, Brooks saw limited action as he was behind Jameson Willams and John Metchie.  Along with JoJo Earle (currently injured - fractured foot; out 6-8 weeks), he is the future of the wide receiver legacy.  Don’t make the mistake I did and wait too long on drafting Brooks in your Devy draft.  He should be a 2nd or early 3rd round pick and enjoy knowing you have one of the next great receivers to come out of Alabama. 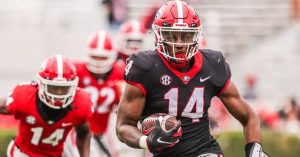 Michael Mayers and Brock Bowers are the first 2 names anyone would bring up in reference to the next big names at tight end in the NFL.  So, I am going to mention Bowers’ teammate, Arik Gilbert.

Gilbert was a 5-star recruit that was the 5th highest rated player in his draft class (originally committed to LSU).

Out of high school, Gilbert was already getting comparisons to Mark Andrews and projected as a first round pick.  At 6’5 and 248 lbs, Arik has ideal measurables for the position.

After transferring to Georgia, Gilbert took a personal leave of absence last season.  He will now be playing second fiddle to Brock Bowers.  However, he has the ability to play lead for any band.  He and Bowers will create a 1-2 punch that most college (and many NFL) teams will not be able to deal with effectively.  Gilbert will need to prove he can handle volume, but all indications are, he is ready and willing.

Gilbert is a great “under the radar” pick since TE is not a widely coveted position in Devy drafts.  However,  there are not many players with this amount of upside available later in Devy drafts like Gilbert and you should capitalize.

Devy drafts are not for the casual fantasy football fans.  Instead, it's for those players that truly want to immerse themselves in this amazing game called football.  I hope these few suggestions help you dominate your Devy league for years to come.