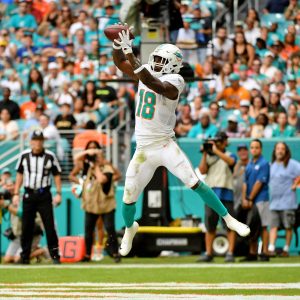 The Miami Dolphins surprised a lot of people last season when they were not the worst team in the NFL.  Expected to “Tank for Tua”, the Dolphins went 5-11 and showed flashes of decency at times.  They were still able to snag prized QB Tua Tagovailoa with their 1st round pick.

One of the bright spots was WR Preston Williams.  Williams went undrafted out of Colorado State, after foregoing his senior season.  The talented WR went on to catch 32 passes for 428 yards and 3 TDs before tearing an ACL in Week 9 against the Ravens.  Teaming with fellow WR DeVante Parker, Williams formed a formidable pairing through the first 8 games of the season.

Early reports out of Dolphins camp are saying Preston Williams is stepping right back in where he left off.  If you don’t remember, Williams was arguably the Dolphins top WR before going down for the season.  In the 8 games played together, Williams out-targeted Parker 60-52.  It wasn’t until after Williams was injured that Parker really exploded towards his career season.  While I don’t see Williams surpassing Parker now that the ladder has established himself within the offense, I do think he is right there with him.  If Parker is 1A, then Williams is 1B.

Miami has improved their team going into HC Brian Flores’ 2nd season, and they should be competitive in the now winnable AFC East.  Newcomers Byron Jones, Shaq Lawson, and Kyle Van Noy will step in to help out the defense, while Jordan Howard and Matt Breida are upgrades at the RB position.

QB Ryan Fitzpatrick is serving as the placeholder and mentor for rookie QB Tua Tagovailoa, but he is more than capable of being a serviceable and winning QB.  Fitz has shown the ability of putting up big numbers within this offense, putting up four 300 yard+ games last season.  Combining Parker with TE Mike Gesicki and a healthy Preston Williams will allow for some big offensive games.

Preston Williams is a massive target for Ryan Fitzpatrick...and eventually Tua Tagovailoa.  At 6’5” 218lbs, he is an incredible downfield threat and redzone target.  If he can stay healthy, he should easily surpass 100 targets.  Currently being drafted as the WR53, Williams should be a top-30 WR in 2020.