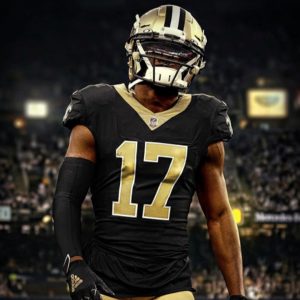 Emmanuel Sanders has been criminally underrated his entire career.  Even when he was a Pro Bowler in Denver, Sanders was never really thought of as a fantasy must have.

Sanders has always been a productive WR deserving of being on your fantasy team, but this season he should definitely be on it.  The 10-year pro signed a 2-year deal with the New Orleans Saints this offseason and will be paired with Michael Thomas to form a dangerous duo for Drew Brees.

The Saints have not had a reliable 2nd receiver to compliment Thomas.  The hope was Tre’Quan Smith would have become that secondary threat, but that has not materialized.  With the signing of Emmanuel Sanders, the Saints now have a dynamic WR to be able to trust opposite of their young stud.

Currently being drafted with an overall ADP of 103 as the WR45, Sanders is being seriously undervalued.  I have no problem drafting him within the top-28 wide receivers.