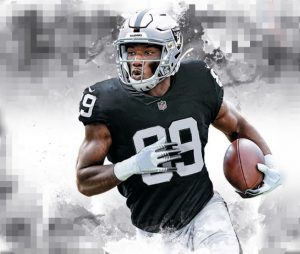 The Las Vegas Raiders surprised many people in April when they drafted Henry Ruggs III with the 12th overall pick in the NFL Draft.  Ruggs was considered a 1st round talent. However, he was the 1st WR off the board ahead of fellow Alabama teammate Jerry Jeudy, Oklahoma WR CeeDee Lamb, and Justin Jefferson out of LSU.  The Raiders had a need at WR, so Ruggs will arrive in Las Vegas with plenty of hype and expectations.  Viva Las Vegas!

Veteran QB Derek Carr had a solid season in 2019, mostly relying on TE Darren Waller.  Carr finished the season with over 4,000 yards passing and completed over 70% of his passes.  With a glaring need to surround Carr with more weapons, GM Mike Mayock and HC Jon Gruden decided to address that need in the draft.  Along with Ruggs, the Raiders drafted RB/WR Lynn Bowden out of Kentucky and former South Carolina WR Bryan Edwards.  Edwards was the steal of the draft for Vegas.

The 2nd of consecutive picks in the 3rd round for the Raiders, Edwards holds the record for most receptions and receiving yards at the University of South Carolina.  At 6’3” and 212lbs, Edwards has elite size and strength to fight for contested balls.  He was a 4-year starter while playing for the Gamecocks, and left Columbia as one of the most beloved players in South Carolina history.

Currently being drafted as the WR77 in the 21st-22nd round, Edwards is being tremendously undervalued.  Scoop him up before people start to catch on.  This will be the lowest price you will ever have to pay for him.