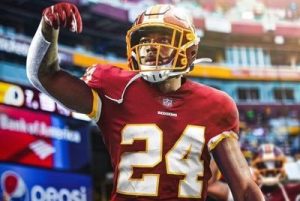 On the surface, the Washington Football Team has some depth at the running back position.  However, it doesn’t take much digging to realize that they have major issues at the position.  Derrius Guice was released after he was arrested on domestic abuse. That leaves Adrian Peterson, Bryce Love, Peyton Barber, JD McKissic, and Antonio Gibson.  Peterson is a future Hall of Famer, but is 35 years old.  Bryce Love was a Heisman candidate during his junior year at Stanford, but he has been injured since his senior season.  Peyton Barber has never been very effective in his NFL career.  JD McKissic is a pretty good receiving back, but has never shown the ability to be a lead back.

That takes us to Antonio Gibson.

Drafted out of Memphis with the 66th overall pick in the 2020 NFL Draft, Gibson was primarily a WR for the Tigers compiling 38 receptions for 735 yards.  Although, he did record 33 carries for 369 yards during his senior season.  With his ability to be a jack of all trades type of player, Washington took a chance on the 6’0” 220lb dynamo and they are converting him into a RB.

Head Coach Ron Rivera made waves earlier this offseason when he compared Gibson to Christian McCaffrey.  CMC is arguably the best RB in the NFL and the overall #1 player in terms of fantasy football, so that comparison may seem a little over ambitious.

What if Antonio Gibson is really that type of player for the team formerly known as the Redskins?  If he can prove to be a healthy, reliable, dynamic back for Washington, then you can get an absolute steal in your fantasy league.  Currently going in drafts as RB58, Gibson has MASSIVE potential to be a real sleeper this season.  With Guice being released, I’d definitely take a chance on Gibson and his 16th round ADP.

While that might not seem like a league winner this season, he is a definite dynasty stash.  He can be used as your RB4 this season with no hesitation.