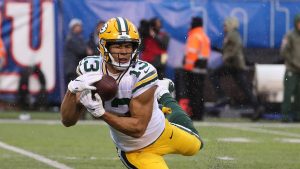 Have the Green Bay Packers finally found a WR2 to pair with Davante Adams?  The Packers have not had tandem WRs achieve 100+ targets apiece since 2016, when Jordy Nelson and Davante Adams both had over 100 targets.  Last season, 38 players in the NFL saw 100+ targets.

In 2019, Allen Lazard was targeted 52 times and caught 35 of those balls for 477 yards.  He played in all 16 games, but he only started 3 of those games.  Going into the 2020 season, Lazard projects as the WR2 for Green Bay.  If he is indeed the number two WR, he should become a target monster and a red zone threat for Aaron Rodgers.

With the departure of Geronimo Allison to the rival Detroit Lions, 55 targets from last season also left.  Combine that with the fact that Marquez Valdes-Scantling’s targets decreased from 73 two seasons ago to 56 last season, Allen Lazard could see 90-100 targets.

If....take that word for what it’s worth...IF Allen Lazard becomes that true 2nd receiver in Green Bay, he could be between a WR2 and WR3 in your fantasy league.

Currently being drafted as the overall WR67 in the middle of the 15th round, Lazard could pay HUGE dividends at that draft position.  At 6’5” and 227lbs, he has similar size and speed to Tampa Bay star WR Mike Evans.  Imagine Aaron Rodgers having that type of target alongside Davante Adams...