Week 13 was another wild week navigating through challenges with the global pandemic with another rare Tuesday night game. As for the 2020 Rookies, Tua returned as the starter and won again, Swift remained Out, Hurts stepped in for Wentz, Ruggs caught a game-winner, while Clyde Edwards-Helaire and Antonio Gibson made us cry…Let’s dive into week 13!

Rookie Stud of the week:

WR Justin Jefferson: Jefferson continues to churn out an impressively rare rookie season! He led the Vikings in reception, targets, and yards in week 13. Jefferson caught 9 of 12 targets for 121 yards and 1 TD! He also gained 2 yards on his single rushing attempt. He continues to be a must-start WR for all leagues and perhaps will be the single biggest WR ranking riser for 2021.

RB Cam Akers and WR Brandon Aiyuk, more on them below…

Rookie duds of the week:

QB Justin Herbert and WR Jerry Jeudy, more on them below…

New names to the series:

TE Cole Kmet: Kmet trending up, Jimmy Graham trending down…one of our old favorite and dominant TEs’ (Graham) days may be numbered as the rookie (Kmet) is coming on. In Week 13 Kmet was tied for the team lead in targets with 7. He caught 5 of his 7 targets for 37 yards and 1 TD which was an 11 yard score! Kmet now has 13 receptions for 131 yards and 2 TDs on the season! 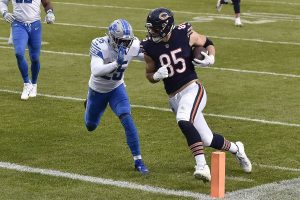 WR Quintez Cephus: As the Lions’ WR1 Kenny Golladay continues to miss time, the Lions are forced to look to the supporting cast to step up in his absence. Week 13 Cephus scored his first career TD! He now has 14 receptions and 237 yards on the season. In the comeback winning effort Cephus caught 2 of his 4 targets for 63 yards and a TD which went for 49 yards!

WR Lynn Bowden Jr: this hybrid WR/RB was traded to the Dolphins at the very beginning of the season which was bound to delay his development. The Dolphins also already had a crowded backfield, so it was a curious move, but in week 13 Bowden got good usage as the Dolphins navigated through a plethora of offensive skill position injuries. Bowden gained 11 yards on his only rushing attempt and caught all 4 of his targets for 41 yards.

RB Anthony McFarland: McFarland led the Steelers in rushing with 15 yards on 4 carries in the unfortunate loss to the WFT as their perfect season bid disappears. He now has a total of 91 yards on 27 carries and has caught 5 of 8 targets 45 yards on the season.

TE Adam Trautman: caught all 3 of his targets for 9 yards…

WR Donovan Peoples-Jones: Scored his 2nd career TD on a massive 75 yard score! He caught 2 of his 3 targets for 92 yards, and of course, a TD!

WR Henry Ruggs: Ruggs had one of the most memorable plays of the weekend as he caught a 46 yard TD to win the game! Overall he caught 3 of his 4 targets for 84 yards. You love to see it!

WR Denzel Mims: Mims caught 2 of his 3 targets for 40 yards…and unfortunately has already ruled Out for week 14 due to a personal/family matter.

WR Gabriel Davis: Davis has another “boom” week with John Brown remaining out. Davis caught 3 of his 4 targets for 68 yards, including a 28 yard TD; his 5th TD of the season!

WR Darnell Mooney: Mooney remained steady as he caught 4 of 6 targets for 43 yards…

WR Collin Johnson: Johnson led the Jaguars in receiving for the second week in a row as he caught 4 of his 6 targets for 66 yards… 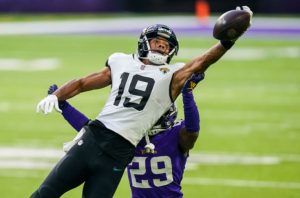 WR Jerry Jeudy: Jeudy mightily disappoints for the 2nd straight week as he only caught 1 of his targets for 5 yards…yikes… Jeudy’s talent and ability is obvious but sub-par QB play has plagued the Broncos all season…

RB DeeJay Dallas: no rushing attempts but he did catch 2 of his 3 targets for 11 yards, he remains usable for fantasy with Carson and Hyde back on the field.

RB Joshua Kelley: similar to D. Dallas above; no rushing attempts but caught his 2 targets for 3 yards

QB Justin Herbert: The rookie phenom struggled mightily in this contest against the Patriots. Herbert had his worst game as a professional QB completing 26/53 pass attempts for only 209 yards and 2 INTs while taking 3 sacks. Yikes… however for your first round playoff matchup Herbert has been gifted to play against Atlanta which should present a nice bounce back opportunity in which I would not hesitate to start him!

QB Tua Tagovailoa: Tua returns as the starter; he registered another win without committing any turnovers or taking any sacks! He is a coaches’ dream come true. For fantasy he was solid as a streaming option; he completed 26/39 passes for 296 yards and 1 TD and gained 3 yards on 3 rushing attempts. Tua is looking like the real deal, and I absolutely love to see it!

QB Jalen Hurts: Jalen Hurts SZN is upon us! Some Eagles fans were left in shock in the 2020 draft when the team drafted Hurts in the 2nd round but it is now looking like a really smart pick for the team that is spiraling out of control. Hurts relieved Wentz of his duties as the offense struggled against the Packers and gave the offense some signs of life. He struggled a little bit himself but did throw his first career TD. He completed 5 of 12 passes for 109 yards with 1 TD (32 yarder to WR Greg Ward) and 1 INT. He also gained 29 yards on 5 rushes but did get sacked 3 times. He was officially declared the starter for Week 14 where they face the hot New Orleans defense. His dynasty stock is exploding as he faces an opportunity of a lifetime. 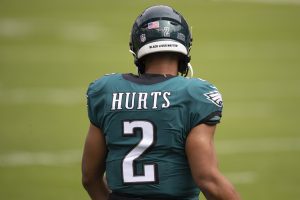 RB Clyde Edwards-Helaire: An absolute devastating situation for fantasy. First of all the Chiefs were slotted for Sunday night which means that if you were counting on CEH then you had to pass up on many other options at RB. Week 13 is of course the last week of the fantasy regular season so there is a heightened sense of risk management where you likely want to play it safe if you are fighting for a playoff spot. Reports stated all week that CEH had an illness leaving him Questionable for Sunday nights game for the majority of the week. On Sunday he was declared ACTIVE to fantasy GMs’ delight but as the Sunday night game approached CEH never got on the field…this was a fantasy nightmare. Nothing questions the process quite like that. If you are in the playoffs CEH may be difficult to trust. Although he is at least a FLEX option moving forward. He is still a major dynasty hold!

RB Cam Akers: Akers greatly turned a corner in his role in the Rams offense. He handled 21 carries where he gained 72 yards and 1 TD! He also caught his only target for 22 yards! A really solid game for fantasy and even more encouraging for his ongoing increased role in this offense. There is a quick turnaround here for the Rams as they play on Thursday night. I like Akers as a FLEX option for your 1st round playoff matchup

RB Zack Moss: Moss’ development goes backwards in this contest as he handled only 3 carries for 9 yards and caught his only target for 5 yards. I still consider him a bench stash/hold. What is a little discouraging is that for several weeks he virtually had an equal number of touches as Devin Singletary but in this contest Singletary out-touched Moss 21 to 4…yikes.

RB James Robinson: Robinson received 24 total touches in this contest. The 2020 Fantasy MVP handled 18 touches for 78 yards and 1 TD and he caught all 6 of targets for 30 yards! Really incredible stuff from the young stud!

RB Jonathon Taylor: Taylor thankfully returned to action in week 13 and returned to his studly self that we fell in love with in the early weeks of the season. He bounced back, despite the higher team RB usage of Hines and Wilkins, with 13 carries for 91 yards and caught all 3 of his targets for 44 yards and a TD! He is officially back in our good graces and should be in starting lineups unless you have a wealth of RB riches! 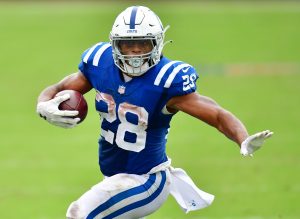 RB Antonio Gibson: The rising star RB Gibson, unfortunately left this contest after only 2 carries where he gained 14 yards. It has been reported that he is dealing with turf toe which will likely sideline him through the fantasy playoffs; a devastating blow to our playoff hopes! Speedy recovery, please!!

RB J.K. Dobbins: Dobbins thankfully returned to action in this juicy matchup against Dallas. Dobbins was once again very efficient with his opportunities; he handled 11 carries gaining 71 yards with a TD! The backfield workshare continues to be a headache, but I imagine that he will be one of the biggest rankings risers going into next season!

WR CeeDee Lamb: Lamb improved upon his Thanksgiving Day performance; he caught 6 of 9 targets for 46 yards! Still solid involvement in the offense but fantasy GMs are greedily left wanting a little more from him.

WR Michael Pittman Jr.: Pittman took the backseat for the second straight week as the TY Hilton show has been in full steam! Pittman caught all 5 of his targets for 46 yards. A supremely talented player who I believe will be a major value in redraft leagues next season.

WR Laviska Shenault: Shenault has been steadily returning to role prior to rehabbing an injury. He was used in a variety of ways once again to showcase his athleticism. He handled 2 carries and gained 30 yards and caught all 3 of his targets for 38 yards a TD (which was a bizarre ricochet catch, worth checking out if you haven’t seen it)!

WR Jalen Reagor: Reagor did a little bit of everything in the losing effort against Green Bay which ultimately led to the mid game benching of Carson Wentz! Back in the 2020 draft when the Eagles selected Reagor over the likes of Justin Jefferson, Brandon Aiyuk, and Tee Higgins. A major rationale for their selection came from a place of versatility despite average to below average college receiving production. Versatility is what they sought, and versatility is what they got. Reagor caught his only target for 34, gained 11 yards on one carry, and scored on a 73-yard punt return! Jalen Hurts was officially named the starter for Week 14, Reagor has nowhere to go but up. Expectations should continue to be tempered for this dynasty hold.

WR Brandon Aiyuk: Aiyuk thankfully returned to action this week served well as a complimentary WR to Deebo Samuel. He was tied (with Samuel) for the team led in targets with 9; Aiyuk caught 6 of 9 targets for 95 yards (including one for 49 yards) and a TD!

WR Tee Higgins: the Burrow-less Bengals continue to struggle offensively but Higgins continues to somewhat come through for fantasy GMs. Higgins led the Bengals in targets with 8 where he caught 5 of them for 56 yards. This was a bizarre game with ejections, including Tyler Boyd who helped bump Higgins targets but still he remains a prominent piece of the offense. We are just patiently waiting for Burrow’s return to the field. 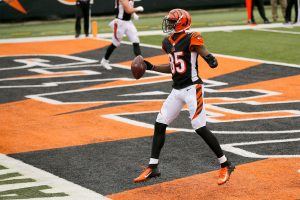 WR: Chase Claypool: Claypool disappointed in this contest as he only caught 2 of 4 targets for 38 yards. We know he can make big plays; I imagine more targets will go his way moving forward especially with all of the drops coming from teammate Diontae Johnson who has been a target monster in Pittsburgh. I would still feel comfortable playing Claypool for your playoff matchups.