Week 12 was one of the wildest NFL weeks yet as the league handles challenges related to Covid-19. Navigating through the team updates that lead to tricky roster and lineup adjustments, it’s all frustrating but one thing that is important to remember is that player safety is the number one priority. Please don’t lose that perspective as we are in the middle of all of this. So anyway, let’s do some Rookie talk… Another week, another mixed bag! As Week 12 was in full mixed bag mode once again and gave us some rookies that benefited from veterans being ruled Out, we had some rookies vanish due to veterans returning, some progression, some regression, and one VERY unique (and quite irritating – for me personally) bounce back performance! Some disappointing developments led to a week without Tua, Ahmed, Swift, Taylor, Dobbins, and Aiyuk. Let’s dive in to see how our favorite and fantasy relevant Rookies performed… 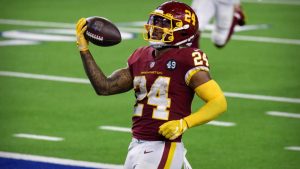 We often talk about how player X will “feast” in this or that matchup or this or that role in the offense…well, Mr. Antonio Gibson did that just in the Thanksgiving day game against the Cowboys…Gibson absolutely feasted! Gibson was gifted with 25 touches! He handled 20 carries and gained 115 yards while scoring 3 (!!!) TDs! He also caught 5 of 7 targets (2nd on the team) for 21 yards! More of this please!

Rookie Dud(s) of the week: Jerry Jeudy (and KJ Hamler)

The Denver QB situation was part of the peak bizarreness of week 12… All three of their active roster QBs were placed on the Covid list but not for testing positive but because they were all considered close contacts of another who did test positive. It was an understandable move but bizarre since every single one was unable to play. Denver elected to start undrafted and practice squad WR Kendall Hinton at QB against the Saints since he played QB at Wake Forest. This brings us to Jerry Jeudy (and KJ Hamler)…the Broncos had a day to forget. The offense struggled mightily to say the least. Hinton only completed 1 pass out of 9 attempts for 13 yards. Jeudy ended with 0 catches and only 1 target…Hamler who didn’t receive a single target did receive 2 carries but sadly for a total of negative 8 yards. This was worse for Jeudy (compared to Hamler) since he has been widely considered a flex option in the majority of recent weeks. This was just simply a week to forget.

RB: Joshua Kelley: Last week I said that Kelley was droppable in redraft leagues and that his window of fantasy relevance was shut… in week 12 Austin Ekeler returned to action which screams that Kelley won't be involved. However Justin Jackson and Kalen Ballage were unable to suit up so that information suggests that maybe perhaps he would get some work. So what did Kelley do? Kelley gained 35 yards on 7 carries and scored a TD (of course)! It is worth noting that Kelley had a rush that went for 33 yards, without that rush he would have only gained 2 yards on 6 carries since he didn’t receive a passing target. His rookie year fantasy relevance is suspect but I believe he scored that TD just to spite me. That obviously is not true, but consider me curious as to how the remainder of the season goes for him.

WR Colin Johnson: Plenty of draft day and dynasty summer hype was realized in this contest where Chark and Conley were unable to suit up. Nevertheless, Johnson ended up leading the Jags in receiving yards and targets as he caught 4 of 8(!) targets for 96 yards and a TD (which went for 46 yards)! He is on the radar but will only get serious consideration if veterans continue to miss time!

QB Jalen Hurts: The Eagles offense looks lost. ALL WEEK we heard that Hurts was going to get an increase in snaps against Seattle…he played 2…2 snaps (facepalm). He completed his only pass attempt for 6 yards. At this point it may be a good thing for the franchise to see what the young guy can do.

WR Henry Ruggs and Bryan Edwards: Ruggs improved in the targets department earning 5 and caught 3 of them gaining 56 yards. Edwards caught 1 of 2 targets for 15 yards. Both remain dynasty holds and unusable in our lineups this season.

WR Gabriel Davis: With John Brown being placed on IR early in the week, this opened up the opportunity for Davis to shine. Davis led the Bills in receiving yards where he caught 3 of his 4 targets for 79 yards and 1 TD! I think Davis is a free agency add since Brown will be out at least an additional two weeks!

WR Devin Duvernay: Without Baltimore pass catchers Mark Andrews and Willie Snead in the lineup, Duvernay had an opportunity to get more time on the field to showcase his ability. The

Pittsburgh defense did their thing and made it an offensive struggle for Lamar Jackson-less Baltimore offense. Duvernay caught all 3 of his targets for 20 yards.

QB Justin Herbert: Herbert and Chargers were outclassed and outcoached in week 12. Herbert disappointed a little bit as he wasn’t able to display his rushing prowess but made up some ground through the air. He completed 31 of 52 passes for 316 yards with 1 TD and 1 INT. Nearly 1/3 of his stats came via Austin Ekeler as he was able to (finally) return to the field. Herbert still has good weapons surrounding him; he remains a starter for your fantasy lineup! 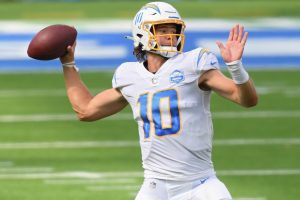 RB Clyde Edwards-Helaire: CEH disappointed a little bit as Tyreek Hill was the big story of the week 12 fantasy slate. CEH once again led KC in carries with 11 and gained 37 yards and caught his only target for 2 yards. Bell is quietly eating into his workload but CEH will be a little bit unpredictable but he is still in an elite offense so I couldn’t imagine not starting him ROS. Solid RB2 ROS and still a hot dynasty commodity.

RB Cam Akers: Akers was the lone bright spot in the LA Rams rushing attack in week 12. He handled 9 carries for 84 yards and a TD, including one rush that went for 61 yards (!). The backfield continues to be a headache, but Akers has scored a TD in two consecutive weeks. He is at least a bench stash and at most a deep league FLEX option. Stock is rising but can he be trusted for your playoff matchups? Time will tell and I hope we get some better clarity and soon because playoffs are already right around the corner!

RB Zack Moss: Moss demonstrated solid efficiency as he earned 11 total touches. He gained 59 yards on 9 carries and caught both of his targets for 9 yards. Moss is a deep league FLEX play if you need a decent floor play in your matchup.

RB James Robinson: Robinson does it AGAIN! I’m becoming a broken record…Not only does he handle 100% of the team RB rushing share but he produced in a massive way. He was given 27 touches; he handled 22 carries as he gained 128 yards and a TD! He also caught 5 of 6 targets for 31 yards! The guy does it all and displays magnificent efficiency with stout production. RB1! 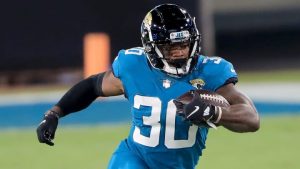 WR CeeDee Lamb: Lamb, and the Cowboys in general, had a disappointing game. Lamb ended up with 5 catches on 7 targets for 21 yards in a 41-16 defeat on Thanksgiving. We will take the 7 targets but it is clear that better days ahead for the young stud.

WR Michael Pittman Jr.: My infatuation with Pittman cooled down this week as he disappointed in the fantasy box score. What remains encouraging is that Pittman was 2nd on the team in targets (9) but he only caught 2 (of 9) targets for 28 yards. The target share alone continues to keep him in FLEX consideration.

WR Lavishka Shenault: Without DJ Chark on the field, Shenault caught 3 of 4 targets for 31 yards and gained 6 yards on his 1 rushing attempt. Look for Shenault to be slowly steadily more involved as he returns to full speed after nursing an injury over the last couple of weeks. He remains a solid bench stash for your redraft league but remains a rising commodity for dynasty leagues.

WR Jalen Reagor: Good grief…the (and my) Philadelphia Eagles are stru-ggl-ing! Yikes! Reagor and all of the Eagles disappointed in the Monday Night showdown. Reagor was 2nd on the team with 7 targets but only caught 3 of them gaining only 11 yards. Better days ahead…I hope.

WR Denzel Mims: The Jets continue to look completely pathetic but Mims has been an encouraging piece for a couple weeks in a row now. He was tied with the team led in targets with 8 but only caught 4 of them gaining 67 yards. He is bench stash in all leagues, I consider him a deep league FLEX option, and his dynasty stock is rising or is at least on par with where it was during rookies drafts last summer.

WR Tee Higgins: With Joe Burrow out for the year, expectations for all of the Bengals pass catchers need to be lowered. Despite Burrow’s absence Higgins still produced so if you kept him in your lineups then you were rewarded! Higgins caught all 5 of his targets for 44 yards and a TD! I still want him in my lineup ROS but with continued tempered expectations.

WR Justin Jefferson: without Adam Thielen in the lineup, Jefferson made fantasy GMs very happy as he led the team in targets and produced in glorious fashion. Jefferson caught 7 of 13 (!!!) targets for 70 yards and 2 TDs! Jefferson remains lineup cement ROS and is one of the single biggest dynasty risers even being surrounded by elite company! 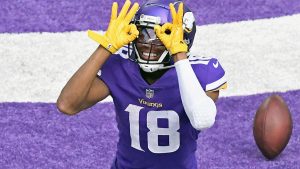 WR: Chase Claypool: In the game that was delayed multiple times, Claypool continues to be an important piece of the Pittsburgh offense. He caught 6 of 9 targets for 52 yards. Considering how we have seen him boom this season this feels like a little bit of a letdown but nevertheless it was a solid outing. He remains a FLEX or a deep league WR2 option!