Week 2 was a week of The Good, The Bad, and The Ugly for the 2021 class. The few positive showings came from WR Rondale Moore, RB Najee Harris, and WR Ja’Marr Chase. RB Javonte Williams, RB Michael Carter, and TE Kyle Pitts all improved upon their week 1 outings while most of the class took a step back in either their week 1 involvement or performance. Let’s start with what was good!

RB Najee Harris – In the loss to the Las Vegas Raiders, Harris totaled 15 touches. He was primarily inefficient on the ground as he gained 38 yards in 10 carries but caught all 5 of his targets for 43 yards, including a 25 yard TD! The volume is what we love to see but we just want the efficiency to improve!

WR Rondale Moore – Moore led the Cardinals in targets (8), led the WRs in catches (7), and finished with a total of 114 yards, including a 77 yard TD! This outstanding performance makes puts Moore in starter consideration, but I wouldn’t expect Moore to double the targets of teammate WR DeAndre Hopkins often. He is an extremely exciting fantasy talent in a fantasy-friendly offense!

WR Ja’Marr Chase – Chase hauled in another TD, but only caught 2 of his 4 targets for 54 yards. Chase’s target share was down in this contest as teammate Tyler Boyd took a swing up from the previous week. Chase will remain a start-worthy option for the foreseeable future, which is exactly what we want from our 1st round rookie picks! 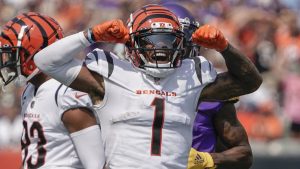 RB Javonte Williams – The Denver backfield was a 50-50 split in week 2; veteran Melvin Gordon handled 15 total touches while Williams handled 14. Williams gained 64 yards on 13 carries and caught his only target for 10 yards! Williams enters into starter territory as the Broncos face the hapless Jets in week 3.

RB Michael Carter – In the article covering Week 1, I said I wanted to see more from Carter. Carter performed well in a brutal outing against the Patriots. He totaled 13 touches, catching 2 of his 3 targets for 29 yards, and handled 11 carries for 59 yards!

TE Kyle Pitts – Pitts had an improved outing in week 2 as he led the Falcons in receiving yards. He caught 5 of 6 targets for 73 yards. Pitts remains a start-worthy option in an offense that has

consistently topped the league in pass attempts. He is a tremendous talent in an extremely ideal situation for fantasy purposes!

Elijah Mitchell - Mitchell looked to add to his impressive and surprising week 1 performance but was brutally inefficient against a Philadelphia defense who had mostly bottled the Atlanta rushing attack from the week before. Mitchell gained 42 yards on 17 carries and caught both of his targets for 11 yards! Love that usage!

RB Trey Sermon - Sermon made an appearance where he gained 8 yards on his lone rushing attempt. He, unfortunately, exited the game after that carry due to suffering a concussion, making his week 3 availability unknown.

WR DeVonta Smith - DeVonta Smith and the Eagles, in general, had an absolute dud of a game. Smith led the way with 7 targets but only caught 2 of them for 16 yards. Eagles QB Jalen Hurts only totaled 39 passing yards in the entire second half! 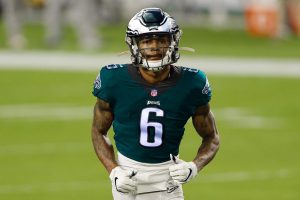 RB Kenneth Gainwell - Kenneth Gainwell showed to be the clear number two option in the running game where he was mostly inefficient with his opportunities. Gainwell gained 14 yards on 6 carries and caught 2 of 3 targets for 18 yards.

WR Jaylen Waddle – Waddle was 2nd on the Dolphins in receiving targets with 8! He caught 6 of them for 48, which led the team. What was bad here was that he lost a fumble which is a shame for his sake since teammate WR Will Fuller was a surprise mid-week inactive. Veteran QB Jacoby Brissett will start week 3 in place of Tua Tagovailoa who exited the week 2 contest early due to suffering broken ribs.

QB Justin Fields – In relief of the injured Andy Dalton, Fields was able to keep it together and hold on for a win as the Chicago defense stepped up to their form of old. Fields struggled a bit completing 6 of 13 passes for 60 yards, 1 INT, while taking 2 sacks. What was encouraging was that he gained 31 yards on 10 rushing attempts which will help his floor for fantasy purposes. He will get the start in week 3 against the Cleveland Browns.

QB Davis Mills – In relief of the injured Tyrod Taylor, Mills got his first taste of NFL action on the road against the defensively strong Cleveland Browns. He completed 8 of 18 passes for 102 yards with 1 TD, 1 INT, and 1 sack taken. With Tyrod Taylor landing on IR, Mills will have plenty of opportunities to show what he can do as veteran Deshaun Watson continues to ride the bench.

QB Trevor Lawrence - Lawrence struggled against a stout Denver defense as he only completed 14 of 33 pass attempts for 118 yards, 1 TD, 2 INTs, while taking 1 sack. A rough outing for a player full of promise.

QB Zach Wilson - Wilson mightily struggled against the division-rival Patriots. He completed 19 of 33 pass attempts for 210 yards, 0 TDs, 4 INTs, and took 4 sacks! Wilson is dripping with potential but obvious holes in the Jets roster may pave the way for a long and difficult rookie season. 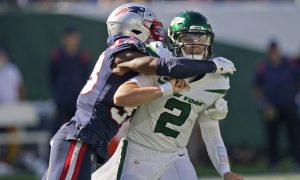 QB Mac Jones – Jones earned a win against the turnover riddled New York Jets. Jones didn’t do a lot statistically in this contest and didn’t need to secure the win. Jones completed 22 of 30 attempts for 186 yards while taking 3 sacks, but NO turnovers!

WR Dyami Brown – Brown caught 3 of 6 targets for 34 yards; he continues to get looks in the offensive as veteran Curtis Samuel continues rehabbing on IR.

TE Pat Freiermuth – Caught all 4 of his targets for 36 yards; as I said last week Freiermuth has big time upside in talent and offensive situation! He out-performed veteran Eric Ebron in this contest; hopefully it is a trend that continues!

Let’s hope the good continues, the bad is minimized, and the ugly is behind us!