Week 3 of NFL action brought another glimpse into rookies with continued strong showings, disappointing outings, and some signs of hope on the horizon. Let’s take a look at which rookies fit which of those criteria from the week 3 slate!

RB Najee Harris – Harris had himself a day in the loss to the Bengals. Harris was once again inefficient on the ground gaining 40 yards on 14 carries. Where Harris really shined was in the passing game; Harris caught a remarkable 14 (!) of 19 (!!) targets for 102 yards! His usage is tremendous but we still what the efficiency to improve!

WR Ja’Marr Chase – Chase does it again; for the 3rd week in a row, he caught a TD pass of over 30 yards! Chase ended up catching 4 out of 5 targets for 65 yards and 2 TDs! Chase looks like the real deal, a true start in the making which is sweet relief based on his struggles with drops during the pre-season. Chase is a locked and loaded WR2 option for all league types! 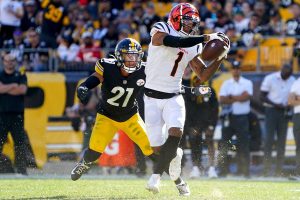 RB Javonte Williams – The Denver backfield continues to maintain a near was a 50-50 split, although veteran Melvin Gordon did out touch Williams 19-15. Williams was inefficient as he gained 29 yards on 12 carries with 1 TD and caught 3 of his 4 targets for 33 yards. In a strong matchup like this against the Jets, I was hoping for a better statistical game. However, the 15-touch mark will keep him in FLEX play consideration for most league types.

WR Jaylen Waddle – Veteran QB Jacoby Brissett was the starter for the injured Tua Tagovailoa in this OT loss to the Raiders. Brissett looked Waddle’s way often; Waddle led the Dolphins in targets as he caught 12 of 13 targets! Waddle only gained 58 yards on those 12 catches, but I will have a close eye on if Brissett will continue to look Waddle’s way in the remaining weeks that Tagovailoa will rehab on IR.

QB Trevor Lawrence – Lawrence struggled again as the Jaguars tallied their 3rd straight loss. Lawrence committed 4 turnovers (2 INT and 2 lost fumbles) and took 3 sacks. He completed 22 of 34 pass attempts for 219 yards, 1 TD, and gained 27 on 6 rushing attempts. In week 4, he will face the Bengals on the road on Thursday Night Football.

QB Zach Wilson – Wilson had another week of regrettable football play. As the Jets faced the tough Broncos defense on the road, Wilson took 5 sacks, threw 2 INTs, and only totaled 160 passing yards completing 19 of 35 attempts. The Jets could be in for a long and painful season. 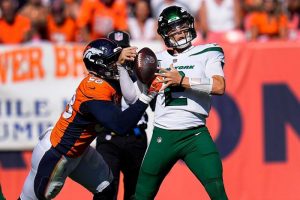 QB Justin Fields – Yikes. This was a starting debut to forget. Fields completed only 6 of 20 pass attempts for 68 yards and gained 12 yards on 3 rushes against the defensively strong Cleveland Browns. Fields did not commit any turnovers but did take 9 sacks! I believe better days are ahead for the hopeful future franchise QB!

QB Davis Mills – In his first career start, Mills struggled in the loss against the surging Carolina Panthers. Mills was underwhelming as he completed 19 of 28 passes for 168 yards and 1 TD. Mills did commit any turnovers in the loss, which is certainly encouraging. It is hard to imagine that Texans win many (or any) games this season; limiting turnovers will be critical to Mills’ prospects with the coaching staff as they will be in a prime position to draft a hopeful franchise QB in the 2022 draft.

WR Rondale Moore – In the first two weeks of the season Moore shows not only good opportunity but also good production; in week 3, he went backward on both. He caught both of his targets for a total of 1 yard and gained 3 yards on his lone rushing attempt.

WR Dyami Brown – 0 catches on 2 targets; very disappointed to see that he was not able to make the most of veteran’s Curtis Samuel’s absence starting the year on IR

Signs of Hope on the Horizon

RB Trey Sermon – In Elijah Mitchell’s absence, all eyes were locked on Trey Sermon as he was presumed to receive the majority of the RB workload. Sermon was inefficient as he totaled 12 touched. He caught 2 of 3 targets for 3 yards and gained 31 yards and scored a TD with his 10 carries.

RB Chuba Hubbard – The Panthers victory on Thursday Night Football was bittersweet. Fantasy football darling, Christian McCaffrey was quickly ruled out with a hamstring injury very early into the contest. We hate to see the league’s best players miss time, but this gave an opportunity for Chuba Hubbard to showcase his ability. Hubbard led the backup RBs in carries with 11 compared to Royce Freeman’s 5. Hubbard also out-targeted Freeman 5 to 1. Hubbard gained 52 yards on 11 carries and 27 yards catching 3 of his 5 targets. He will be the presumed starter and handle most of the workload in CMC’s absence as long as he keeps the efficiency up!

WR Terrace Marshall – As veteran WR Robby Anderson has become the middle child of the Panthers offense, Marshall caught 4 of 5 targets for 48 yards in the Thursday Night Football victory of the Texans!

TE Tommy Tremble – Tremble caught his only target for 30 yards (!) and scored a 7 yard rushing TD, yes a rushing TD, on his only rushing attempt. On Monday following the TNF win over the Texans, the Panthers traded veteran TE Dan Arnold to the Jaguars. Tremble’s opportunity in the offense is bound to increase!

WR DeVonta Smith – Smith and the Eagles disappointed in the demoralizing loss to the Cowboys. Smith caught 3 out of 6 targets for 28 yards as he was bested by Dallas rising start CB Trevon Diggs. 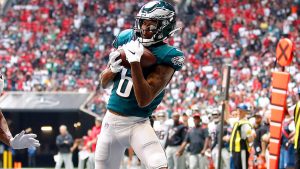 RB Kenneth Gainwell – Gainwell was once again involved in the passing game as he caught 3 of his 4 targets for 32 yards. Gainwell only had 1 rushing attempt in which he gained 2 yards; bizarrely in the brutal Monday Night Football loss to the Cowboys, the eagles only gave their RBs 3 total carries...I would imagine this will be an outlier of a game, but nevertheless, it was shocking to witness.

WR Kadarius Toney – caught 2 of 3 targets for 16 yards; Toney should be in line for more playing time as veteran WRs Sterling Shepard and Darius Slayton are dealing with injuries. I am very curious to see if Toney’s raw talent and unique athleticism can be utilized in their Shepard and Slayton’s absence.

RB Michael Carter – Carter was mostly inefficient but what we like is the 11 touches which led the Jets running backs. He gained 24 yards on 9 carries and caught 2 of 3 targets for 5 yards.

WR Elijah Moore – Moore finished 2nd on the team in targets with 6, but he only caught 3 of them for 22 yards.

TE Kyle Pitts – Pitts caught 2 of his 3 targets for 35 yards. Expectations are high for Pitts and unfortunately the Falcons offense has been a bit of a disappointment so far through 3 games. New head coach Arthur Smith had great success in Tennessee where he served as Offensive Coordinator through the 2019 and 2020 seasons. Some of the issues with the Falcons offense are stemming from QB Matt Ryan. He is 6th in pass attempts which is expected, but his yards per attempt through 3 games in at 6.0; the lowest of his career! Patience is always required with rookie TEs but the Falcons have nowhere to go but up from here.

TE Pat Freiermuth – For the 3rd week in a row Freiermuth has out-produced veteran TE Eric Ebron. Freiermuth caught 3 of 5 targets for 22 yards and caught his first career TD as the Steelers offense looked abysmal in the loss to the Cincinnati Bengals.

QB Trey Lance – Lance did not play much in this game but did make the most of his opportunity as he was able to score a 1 yard TD on his lone rushing attempt!

There is a lot of excitement to had and improvements to be made with this exciting rookie class!

Let’s continue to hope that the good continues, the bad is minimized, and the ugly is behind us!