After only one year of elite production at Pitt, Kenny Pickett quickly became part of the first round quarterback conversation for the 2022 NFL draft. He was well-rounded and ran a more pro-style offense than a number of schools use. Therefore, Pickett was often called the most pro-ready of the top rookies, but lacking the ceiling of Malik Willis. Very early in my draft process, I was a Willis skeptic and a Pickett believer. If you listen to my dynasty podcasts, or follow me on Twitter, you may have been aware of my prediction of “no QB before 20, and Willis won’t be a first rounder.” I was dismissed or laughed at, but here we are -the Steelers took Picket at 20th overall, and Willis was a round 3 selection. So what can we expect from this year’s only round 1 quarterback?

No quarterback in the 2022 class is elite, but the most pro-ready one landed in what was probably the best spot for a quarterback this year. Pickett may push Trubisky to be the starter at some point, but even if he does not, I am perfectly fine with Pickett having a year to learn. In either case, he will be in a solid organization with a very good coach, and will inherit a good array of offensive weapons. Najee Harris and Pat Freiermuth (signed through 2024, fifth year option for 2025) are there for a good window of time. Chase Claypool, whose dynasty value was probably rescued by Pickett’s arrival, is signed through 2023. Pickett’s best weapon, Diontae Johnson, is a free agent after this upcoming season. We could see another story of a team moving on from a second contract receiver in favor of a younger, cheaper one. It will be easier for the team to move on from Johnson if 2022 rookie George Pickens shows good development, something I and a number of others are not convinced of. If Pickens does develop well, then Pickett does not take much of a hit if Johnson leaves. If Pickens does not take the necessary steps forward soon, the 2023 rookie wide receiver class is strong, and that is good for Pickett, too. Pittsburgh also drafted Calvin Austin III for what right now looks like mostly a special teams role, but he can also be insurance for Johnson or Claypool, though he is a different kind of player. The Steelers, then, were a very good landing spot for Pickett. 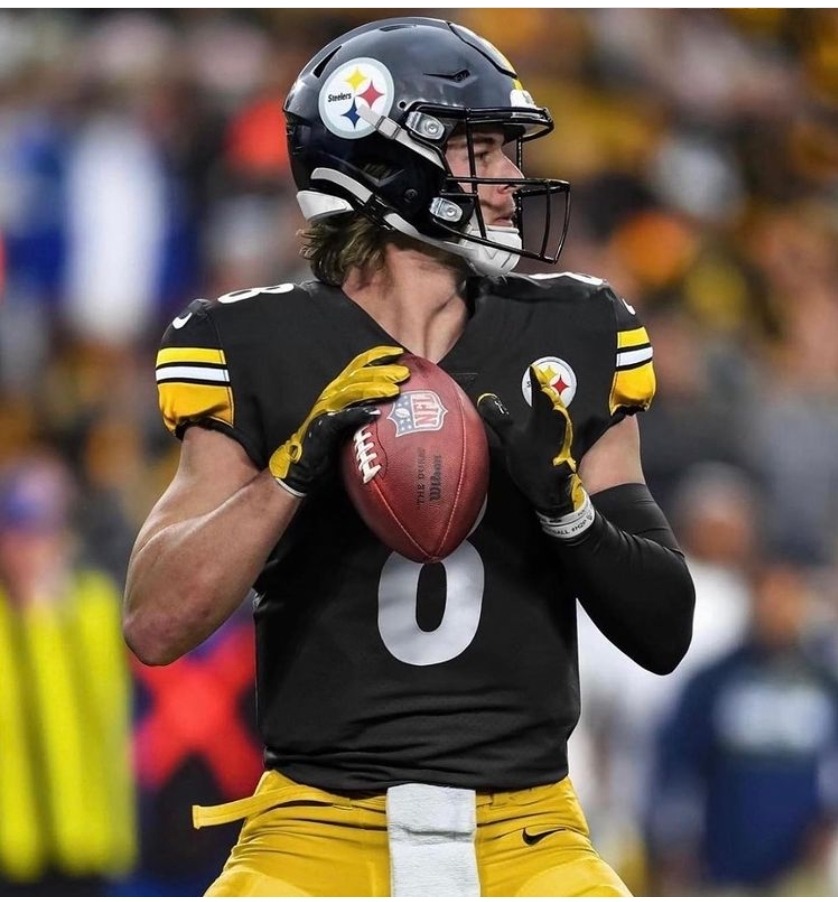 Pickett is a very competent quarterback with a safe floor. He does not have a high ceiling, though, partly because he does not have the athleticism of Malik Willis or Desmond Ridder. . Pickett will have to get better at mobile accuracy and at not getting rattled when he gets unexpected pressure. He has also shown a propensity for untimely mistakes. If the Steelers can improve their offensive line and maintain a solid set of weapons for Pickett, he will thrive, but may only ever be a fringe top-12 quarterback. Think of Derek Carr or, at his ceiling, Kirk Cousins. For 2022, we need to temper expectations, as we should with all rookie QBs. I think Pickett will be the starter at some point in the season, but will struggle amidst showing flashes.

Pickett is part of what I’m calling my “safe six” in 12 team superflex tight end premium rookie drafts, along with running backs Breece Hall and Kenneth Walker, and wide receivers Garrett Wilson, Drake London, and Chris Olave. The NFL told us what they think of Pickett by making him the only round 1 quarterback and, importantly, by showing up the gap between him and the rest of the class, as the next quarterback (Ridder) went 54 picks later, and the supposed QB1 of the class (Willis) went 66 picks later.  So I am fine taking Pickett at 1/05 or 1.06 if I think that’s right for my team. What I’m seeing so far is that there is no consensus on the top 6, so one or two of my safe bets often fall to 1.07 or 1.08. Given Pickett’s status as the lone round 1 quarterback, the landing spot, and the superflex format, he may not often be the one that slips past 1.06 - but this is a very fluid year for rookie drafting, so who knows.