You should always be looking to improve your fantasy teams, especially in dynasty leagues. The most common, and in my opinion the most fun, way to do this is through trades. Of course in dynasty you’re looking for deals on players but you should also be looking for those deals on rookie draft picks as well. Trading for picks can be just as complicated as trading for players though but hopefully the strategies and tips in this article will be able to help you out. There are plenty of articles out there discussing which players are buy-lows and sell-highs so I want to focus on just the trading strategies themselves in this one. I will include some examples of players/picks to be trading for but overall this article will be about the general trade goals you should be trying to accomplish. I’ve separated most of the advice in this article into either “rebuilding” or “competing” information. By this time in the year you should know whether you’re going into a rebuild or not but both sides could take advantage of these tips if you’re getting a good deal.

One of the best ways to improve your draft pick trade game is to know how the value of picks rise and fall throughout the year and to take advantage of it. I’m not talking about whether, for example, the 1.01 in 2020 was worth more/less than the 1.01 in 2021 but about how the value of draft picks in general change throughout a year. The pick value trend goes like this: draft picks are most valuable during the draft, fall of heavily once the draft is over, rise a bit during the regular season, drop a little in the last weeks leading up to the playoffs (for most owners who haven’t been eliminated yet), and then spike again during the offseason until your next rookie draft starts and the cycle begins again. Player values on the other hand are basically the inverse of draft picks (least valuable during the offseason and most valuable during the regular season). There are some big spikes right before playoffs (for competing teams), right after the rookie draft (when owners try to fix their weak areas or trade for the players they missed out on), and right before week 1 (when people are setting their teams). For a visual, I put together the chart below to show the movement of pick/player values and how it relates to the major events in a fantasy year. 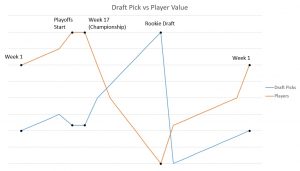 Now what does that mean for trades in preparation for your rookie draft?

The best time to trade for draft picks was yesterday. The second best time to trade for draft picks is today. If you’re looking to rebuild in this year’s rookie draft, start looking to trade your aging veterans now. Don’t wait until your draft starts when everyone will be clamoring for picks. Go put your guys on the trade block and see who’s interested. Don’t feel like you have to trade them if the deal is not right; most players will still have value once the season starts. It’s a fine line to tread though because player values are going down right now while pick values are going up and that’s not going to change until the draft is over. Your situation isn’t getting any better by waiting so start making moves now if you can. Also keep in mind that trading your vets for the early picks in each round will be difficult because owners with the early picks are usually also rebuilding and aren’t looking to pick up veterans. You’re more likely to find success trading for mid-late picks but you never know until you ask. These are the types of trades I’d be looking to make if I’m rebuilding:

If you haven’t already sold your picks trying to win last year, wait until the rookie draft to start selling them off (Note: this assumes you have time to negotiate trades during your draft with longer pick times). Pick values, as I said, are at their highest during the draft. You’d be surprised what you can get from people chasing the rookie hype trains, especially when you are on the clock to pick. If you’re on the clock and you aren’t in love with your available options, offer up your pick and let them come to you. There will be owners looking to trade up and you might be able to get really good deals if they are desperate. Sometimes a “normal” deal is all you can get done but if it improves your team then go for it. Remember this is Dynasty though. So while you want plenty of good players, you don’t want a team only made up of aging vets.

For this strategy, it’s important to realize that you’re intentionally looking for trades that probably wouldn’t get done normally. Look for owners who will overpay for your rookie picks when they’re in the heat of the moment. These are some of the players I’d be looking to try to get for my mid-late picks:

Don’t be afraid to trade back your high value picks if the price is right. This is especially true if you’re on the clock to pick and you aren’t happy with your available options. For example let’s say you have the 1.03 this year, you miss out on the QB you want (in SF), and you need a WR. Definitely see if you can trade back a couple spots. You could probably trade back to the 1.05 and get the 2.05+ thrown in. In this case you still probably get the player you want with your 1st round pick but get a free 2nd round pick on top. The 2nd could instead be replaced with last year’s rookies that had solid but not record breaking rookie seasons (i.e. Gabriel Davis, Darnell Mooney, or Cole Kmet). It’s also not limited to just trading back 1st round picks either; it’s an option for any rookie pick that you aren’t happy actually picking with. There’s a lot of flexibility when trading back so don’t feel obligated to pick a player just because it’s your turn to. Like I said in the “competing” section above, waiting until you’re on the clock for a trade like this will likely give you the most bang for your buck.

Another point to remember is that draft picks are basically lottery tickets. Nobody can say for certain how any player is going to pan out. Having more draft picks will likely increase your chances to hit on a player since there are always gems to be found in the later rounds of the draft. Looking at last year’s ADP, Justin Jefferson was going in the late 1st, Justin Herbert in the 2nd (SF), and Chase Claypool and Antonio Gibson in the 3rd. If we were to redo that draft this year it would look much different. So be looking out for opportunities to trade back if the deal is right but don’t lose value trying to get cute.

If you ended up with later picks this year and aren’t planning on rebuilding, it’s worth shopping around for future year picks. For example, if you’re in a 12-team league and have the 1.09-1.12 pick, see if you can trade your 2021 1st and 2nd to a rebuilding team for their 2022 1st and their 2021 2nd. This kind of trade might seem weird but the idea is to take a hit this year so you can come out ahead next year.

The payoff of this trade might not be immediately obvious so I’ll explain it a bit more:

So without looking at the years, the trade ends up looking like this: 1.09 and 2.09 for 1.06 and 2.03. That’s pretty insane value to move up on both your picks. In reality it’s not free though and you do pay for it in lost value this year. Ideally you aren’t missing out on much since your picks this year were late. That is a very important aspect of this type of trade to understand. It only really works when trading current year late picks (2021 1.09-1.12) otherwise you risk the future pick losing you value.

It’s also important that you follow your leagues rules about trading for future picks. Generally leagues make you pay your dues ahead of time when trading future picks. So make sure you double check with your commissioner before completing the trade.

I laid out a bunch of information but if you come away with nothing else from this article it should be these three things:

Thanks so much for reading and hopefully the information here will help you improve your trading game. If you have any questions about the article or general trade questions feel free to send them to me on Twitter @NeutralZoneFF.