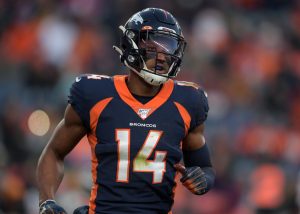 One of the biggest concerns going into 2021 for the Broncos was QB and a lot of people were surprised when they didn’t draft one at #9, especially with Justin Fields (one of my favorites in this class) being available. They did pick up Teddy Bridgewater, who will compete but likely isn’t much of an upgrade over Drew Lock if at all. There’s also rumors about the Broncos picking up Aaron Rodgers, who would be a major upgrade and put this team in a position to compete right away. Right now though it is just a rumor so it’s best just to assume it’s going to be a QB competition between Lock and Bridgewater. Another offensive need of theirs was at RB so drafting Javonte Williams to pair with Melvin Gordon has given Denver a pretty solid RB duo. They should also be getting Courtland Sutton back from injury which coupled with their young receivers taking a step forward (TE Noah Fant, Jerry Jeudy, and KJ Hamler) will really help this offense.

On the other side of the ball, the Broncos definitely did some work beefing up the defense this offseason. They added and re-signed multiple CBs in addition to bringing back big impact players like Von Miller and Shelby Harris. With all that, their defense is going to be pretty tough in all areas of the field. Will it be enough to overcome their shortfall at QB? I’m not convinced, though it has been done before.

The biggest question for the Broncos right now is clearly their QB. Drew Lock left a lot to be desired last year and many fans were ready for them to draft one with the 9th overall pick. The Broncos did not so we’re left with an awkward competition at QB. It seems like they want Lock to be their guy and Bridgewater is there to light a fire under Lock to get him to take a step forward. I think either of these guys could end up with the starting job though so neither will really be worth a whole lot until that is decided. I think Lock has the highest ceiling since he is younger and definitely could take a step forward while we pretty much know what Teddy can do. Regardless, either of them will be set up to succeed with all the weapons the Broncos have. 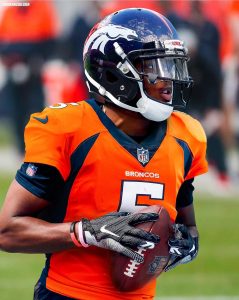 Now outside of QB, the Broncos have a lot to be hopeful for on offense. They have multiple very good receiving options that will help stretch the field. Cortland Sutton has been a star before getting injured last year and I expect him to get back to form in 2021. There is definitely some concern since ACL tears can sometimes cause lingering issues but I wouldn’t be concerned just yet. Sutton is actually probably a good value pick up in Fantasy due to his injury concerns. I also think Jerry Jeudy and Noah Fant are pretty good buys in Dynasty since I expect both of them to take a big step forward this year. Coupled with the QB question marks, all three of these guys could be pretty good value pick ups. 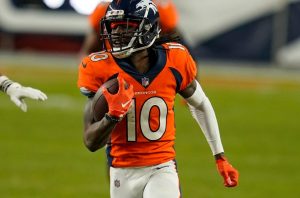 Finally a look at the RB group for Denver. Again, they are set up pretty well with some good options to run out each week. Melvin Gordon was a pretty good value pickup before the draft but adding Javonte Williams (one of my favorite RBs in this class) will definitely cut into that. I don’t expect Williams to be a workhorse right off the bat but I could see him taking over a good chunk of the work as the season goes on. Gordon should still have some value though, especially at the beginning of the year. So if you’re competing and RB needy, now is probably a pretty good time to pick him up for cheap. Don’t expect to hold onto him all season though. See how things develop and if you do have him or end up buying him, I’d look to sell him towards the early-middle part of the season (think around week 6 or 7) when I expect Williams to get more heavily involved.