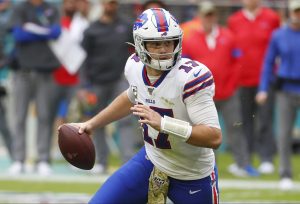 As expected, the Bills did not invest very much in their skill positions during the draft. Marquez Stevenson in round 6 was the only skill position player they added and he looks to mostly serve as a depth piece behind their already strong receiving corps. There were discussions about drafting a RB but they seem happy with who they have, especially with Najee Harris and Travis Etienne coming off the board before their 1st round pick. With them also not making many big free agency signings on offense, it looks like the Bills are going to look pretty similar to last year. Can’t blame them though considering they were one game away from the Super Bowl.

The Bills have a solid RB group but the offense is going to run through Josh Allen, literally. For the RBs, it’s going to come down to who scores the TDs each game and your guess is as good as mine there. This is definitely going to be a RB by committee with four possible options so I wouldn’t be happy with any of them as my RB1 or even RB2. Any of Devin Singletary, Zack Moss, Antonio Williams, or Matt Breida could end up running the show each week and that’s just risky from a fantasy perspective, though probably pretty good for the Bills themselves. They all have decent flex or bye week value though so they might be worth rostering if they’re cheap enough. 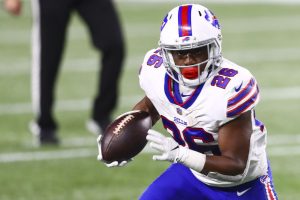 For the wide receivers, Stefon Diggs is definitely the one to own. He had 166 targets in his first year with the Bills which was 1st overall in the NFL last year. They made mostly lateral moves in their receiving corps so again, I would expect something similar from Diggs and Allen in 2021. While Diggs is basically a lock for Fantasy production, the #2 on the team is in flux. Obviously Cole Beasly and Emmanuel Sanders have shown they can be serviceable WRs and they should continue to be this year. They are both pretty old though (32 and 34 respectively) so I don’t expect much in terms of dynasty value. Gabriel Davis on the other hand is a player I’d be looking to buy in dynasty. He performed pretty well last year for a rookie (4 games with 15+ .5PPR points) and I could see him jumping into the #2 role pretty soon, which on a high powered offense like the Bills means a lot of fantasy points. 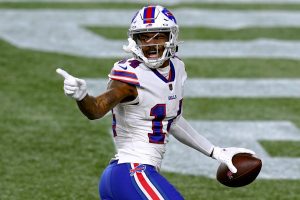 Now the core of the team: Josh Allen. Like I said, the offense is going to run through Allen. He’s a playmaker with his legs and his arms. He stretches opposing defenses by himself and he has very good weapons to work with. With some improvements on the offensive line, though no major changes, Josh Allen should continue to produce at a high level. There are some concerns out there about Allen’s 2020 season being a fluke and expecting him to regress but I don’t buy it. The Bills have a great coaching staff and, to me, it looks like 2020 Josh Allen is the real Josh Allen. He definitely needed time to develop out of college but he has shown his ability to learn and get better. Plus he’s going to be hungry after missing out on the Super Bowl so I don’t expect him to slow down anytime soon.