Another action packed NFL week is in the books with one of the best of the season yet. This is the 5th week in a row that has had an overtime game, the Chargers and Browns put up a combined 89 points, and Jon Gruden resigned from the Raiders. With all these inflated numbers, high scoring games, injuries, and adjustments this early in the season, there’s bound to be some overreacting out there. Let’s dive into what you shouldn’t overreact on, and who you should be on your hot seat. 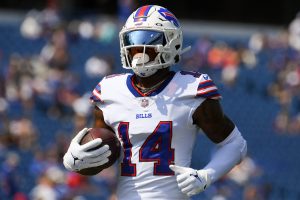 Stefon Diggs had a great matchup on paper against a porous Kansas City defense, who allow top passing yardage on a weekly basis - yet Diggs failed to put up numbers. With just two receptions Diggs had 69 yards totaling 8.9 PPR points. Diggs hasn’t lived up to his high ADP this year, but we shouldn’t overreact to just five short weeks in this extended season. The good news is Diggs still had five targets from Josh Allen, who threw 315 yards this week. The Bills have an easy schedule upcoming with bad defenses like the Titans, Dolphins, Jaguars, and Jets where Diggs is bound to have huge games. Emmanuel Sanders is not going to be a target and touchdown hog for long, so be patient on Diggs. If you don’t own him, send a panicked owner a trade to see how low his price has dropped with the disappointing start. Diggs is still a WR1 option in the upcoming weeks.

Darren Waller, along with the rest of the Raiders skill positions, is going to be a large topic of discussion this week as the Raiders have moved on from Jon Gruden. Waller disappointed against Chicago in Week 5 with only four receptions for 45 yards. However, he still had eight targets with 11.25 yards per catch. It may be a shaky week coming off of the recent news, but Waller plays an average of 90% of the snaps and remains highly involved in the offensive game plan. Once Derek Carr starts to get hot again and has some more accurate throws, Waller will be a PPR machine and the Raiders top red zone target once again. Don’t overreact to the media circus - with a change at the head coaching position, the Raiders will rely on their most consistent pass catching option to get the job done. Start Waller with confidence going forward, even with the moving pieces in Las Vegas.

Marquez Callaway had a huge game in Week 5, scoring 24.5 points in PPR fantasy league making him an intriguing trade target in dynasty formats. Let’s not overreact to a huge game indicating his future use in the offense. Callaway caught only four passes with an average depth of target being 21.25 yards. Two of those passes were caught for a TD - but let’s not forget that one of these passes was a last second Hail Mary from Winston for 49 yards at the end of the first half. This inflates Callaway’s stats making the score look a lot better on paper than in real life. While Callaway seems to be the Saints deep ball target at the moment, we can’t rely on Jameis to connect on these on a weekly basis. If you take away this singular pass, Callaway would only have had a 12.5 point game, even with the other touchdown. The Saints are on a bye in Week 6, and reports say that it’s likely that star receiver Michael Thomas will be returning to play in Week 7. Temper expectations for Callaway moving forward as his snap count and target share will likely decrease in the coming weeks.

Myles Gaskin had an enormous game in Week 5 against Tampa Bay scoring 31.9 PPR points. Gaskin only had five carries for 25 yards, but had some real work in the passing game tallying 10 catches for 74 yards and two receiving touchdowns. It’s clear that QB Jacoby Brissett had no down the field options in this game, and the rushing attack was stymied by the stout Tampa Bay front seven. The large part of Gaskin’s work came from Brissett throwing the checkdown. While Gaskin was the clear lead back in this game playing 69% of snaps, we can’t expect the game script to be this way for the rest of the season. Gaskin owner’s in dynasty leagues rejoiced as they finally got their big game, making him a clear trade-away target this week. With the inflated numbers, it’s time to sell Gaskin for what you can get, unless you are desperate for RBs.

AJ Brown has been one of the most disappointing top-tier receivers so far in the 2021 season. Coming off of injury, Brown scored 6.8 in PPR leagues with three catches for 38 yards. The good news (or maybe bad news) is that it looked like Brown was on a snap count for this game with his lingering hamstring problems. He was only on the field for 65% of snaps compared to his usual 80-90%. The passing game was not a large part of the game script against Jacksonville as Ryan Tannehill didn’t even throw for 200 yards. The Titans have been waiting for their dynamic duo of Julio Jones and AJ Brown, who both had injuries in the same week, to come back to true form, and Week 5 was not that week. Once both star receivers are healthy again, I can see Mike Vrabel calling some more down the field passes to take some heat off of Derrick Henry. AJ Brown was an absolute stud in 2020, so let’s not overreact to a few down weeks at the start of this season and panic. Look for Brown to bounce back in the coming weeks as the Titans get healthier and start throwing the ball more. 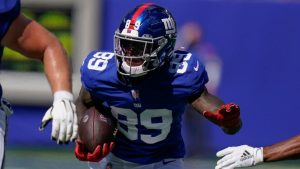 Kadarius Toney finally gets a chance to showcase his skills in New York and prove that he was well worth his first round draft capital. And what does he do? Get ejected for throwing punches - in typical Florida fashion. Despite being a hot head, Toney looked like an elite route runner - even against break-out star corner Trevon Diggs. Toney scored 29.6 PPR points with 10 catches for a whopping 189 yards against Dallas in Week 5. While Toney looked like a seasoned veteran, his target share was a product of injury in the Giants receiving corps. Starting wideouts Sterling Shepard and Darius Slayton both missed Week 5 with hamstring injuries, and high-dollar Kenny Golladay left mid-game with a hyperextended knee. While Toney balled out with the time he had, moving forward he will not be the sole target of Daniel Jones. The Giants expected both Shepard and Slayton back in Week 6, and Golladay to only miss a few short weeks. While Toney proved he has some serious talent, don’t expect him to get such a massive target share in coming weeks. Toney is a great stash in dynasty leagues but may have to wait his turn yet again. Keep him on the bench for now.

Joe Mixon was called a bust in 2021 even before the season started. I’m not ready to give up on him just yet. Coming off an ankle injury, Mixon was limited in Week 5 as he only played a mere 28% of the Bengals snaps. Mixon still put up 10.5 points in PPR leagues as he managed to find the endzone for the 3rd time this year. It’s clear with his low utilization that Mixon is not back to full health just yet, but another week of rest should put him with no injury designation come Sunday. Mixon and the Bengals play the Lions in Week 6, who are the 29th best team at stopping the running back so far in 2021. With an easy defense coming up, Mixon has every opportunity to show why he was a high pick in drafts this year. Don’t overreact to Mixon’s low scores due to injury. Mixon is a must start in all formats in Week 6.

Tyler Lockett - Lockett is the biggest boom or bust player in the NFL. With Geno Smith now leading the Seahawks, Lockett is no longer a must start.

Adam Thielen - Thielen started off the season hot, but has only had a combined five catches in the last two weeks. Keep an eye on him and consider benching him against Carolina.

Blake Jarwin - It’s abundantly clear that Dalton Schultz has taken over the TE 1 position in Dallas. Jarwin should be benched until further notice.

Ryan Tannehill - The Titans as a whole have looked miserable all season. Tannehill is not playing like he did in 2020, and the Titans are not passing nearly as much.

Tyler Boyd - With the return of Tee Higgins and the emergence of Ja’Marr Chase, Boyd is clearly the 3rd option in the Cincinnati offense.

Jamaal Williams - Starting hot to enter the season, Williams still gets a decent amount of carries - but it’s clear that Swift is the goal line back. This limits Williams' ceiling.