Week 3 is in the books and fantasy managers as a whole have a better idea on players trends. However, there is always that nagging feeling that you should trade away your struggling stud as it looks like their whole season is a bust, for a waiver wire add that scored 30 points this week. Don’t panic! In a 18 week season, three total weeks is only a fraction of what’s to come. This week we will be diving into struggling studs,  but also some low tier players that are putting up numbers - both of which you shouldn’t overreact on. 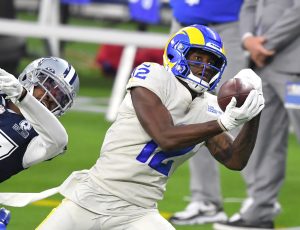 I have seen several comments this week that Robert Woods could be the biggest bust yet this season. With teammate Cooper Kupp as the undisputed WR #1 so far in 2021, Woods has struggled getting targets and maintaining volume due to fellow pass catchers, Desean Jackson, Van Jefferson, and Tyler Higbee. It’s not time to start tilting on the 29 year old just yet. Kupp has been shredding defenses at will - and at some point in the near future, teams are going to realize this. With Kupp getting the focus of the secondary, Woods will open back up and be the PPR machine we have seen in the past few years. Week 4 and 5 come with high scoring games against Arizona and Seattle, and then comes offensive heaven - the Giants, Lions, and Texans. I’m fine with holding Woods until he proves why he should still be a top option at WR.

I’m not ready to panic on Allen Robinson yet. Often called the most “QB Proof” receiver in the NFL, Robinson has had a rough start to the 2021 season with the combination of Andy Dalton and Justin Fields. Robinson caught only two passes in Week 3 against the Browns. On the positive side, he had a team high in targets with six, and believe or not, he led the team in receiving yards with 27. Justin Fields is having some obvious growing pains adjusting to the NFL. The Bears play a struggling Lions defense, who are allowing 32 points a game on average. Look for Fields to bounce back with an easy matchup, and Robinson to be targeted in the red zone. 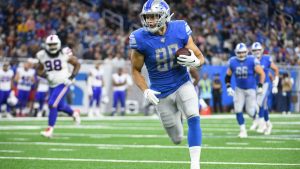 Capitalize on a down week from Hockenson by sending an offer to a recency-biased manager. TJ had a monster Week 1 and 2, but only caught two passes against the Ravens in Week 3. In a low scoring defensive battle, the Lions didn’t have much going on offense, so these low numbers are to be expected. In the first weeks of the season, Hock had 20 targets for 163 yards and two touchdowns - look for him to repeat similar numbers in weeks to come, as Week 3 will be a total outlier on a season long basis. Clearly the top pass catcher on the Lions offense, Hockenson is a must start in Week 4.

Miles Sanders' struggles are a direct effect from Nick Sirianni and the Eagles coaching staff. It is an absolute mystery to me why they are not utilizing one of the most skilled players on their offense. Sanders had only two carries for 27 yards, and benefitted from some garbage-time pass catching work for 28 yards. Sirianni called a mind boggling game - passing on seemingly every down while completely ignoring Sanders and the ground game. The positive news is, on the carries and receptions Sanders actually had, he was very efficient. Let’s hope that some sense is slapped back into the Eagles staff in Week 4. It’s not time to panic on Sanders yet with the hope that he gets fed in the next couple weeks. 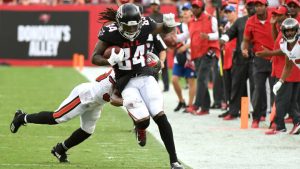 Cordarrelle Patterson has started off the 2021 season as the RB #9. Yes, you read that correctly. Just like we all expected, right? Patterson isn’t really an RB, but a WR disguised as an RB with the majority of his work coming in the passing game.  He posted 102 all-purpose yards against the Giants and won some managers a matchup this week with 6 receptions. Do yourself a favor, and don;t overreact to this - especially in Dynasty leagues. Let the guy who picked him up off of waivers have his small moment in the spotlight. Cordarrelle is on a one year deal with the Falcons, is 30 years old, and is completely unsustainable. He’s not worth any of your future picks, unless you desperately need a flex fill-in. Save your assets and laugh at the guy who goes and trades a 2nd or 3rd round draft pick for Patterson.

Emmanuel Sanders exploded in Week 3 with five receptions for 94 yards and two touchdowns. We can’t overreact to a big game by the veteran, even if he is in one of the highest passing offenses in the NFL. I’m going to go out on a limb and say that this is probably the highest he will score all season. In the previous weeks, Sanders only had 6 receptions for low yardage. With Josh Allen playing as elite as ever with 5 touchdowns, Sanders just happened to be his red zone target this week. Allen most likely won’t throw for over 350 yards every game. Expect Diggs and Beasley to continue their current roles in the offense, and Sanders to fall back to 2-3 catches per game. Present on most waiver wires, Sanders may be one of the most added receivers this week - save your FAAB and stay clear of the 34 year old. Do you already roster Sanders? Throw out a trade for a 4th round draft pick and see if anyone bites.

Devonta Smith - The Eagles offense has been pathetic in Weeks 2 and 3, and Smith has had some drops. Let him develop and keep him on your bench for now.

Robby Anderson - Anderson hasn’t been in the offense whatsoever this season. Darnold clearly favors Moore. Trade Anderson for anything you can get in Dynasty leagues.

Carson Wentz - Unfortunately, Wentz looks like he is back to his old Philly ways - errant throws and injuries. Wentz shouldn’t be started until he can prove it.

JuJu Smith-Schuster - With the combination of Big Ben playing like a washed up veteran and hurting his ribs, we should be concerned with JuJu’s long term value.

Robert Tonyan - Even in a high scoring game against Detroit, Tonyan was a non-factor in the offense. As a touchdown-dependent TE, Tonyan should only be started in deep leagues.

Miles Gaskin - Clearly Miami was truthful about using a rotating committee in the backfield. With Tua sidelined, Gaskin is not going to have much opportunity to score - which is the only reason you would have to start him.