Another Week 1 of the NFL season is in the books - and it didn’t disappoint. There were upsets, heartbreak games, overtimes, and huge fantasy weeks for some players. But as always, there were studs that put up duds. Without fail, you will see freak outs after a high draft pick puts up a bad stat line and loses Week 1 for fantasy managers. I’m here to tell you who you shouldn’t overreact on, and who you should possibly be a little concerned with. Here are my overreactions from Week 1. 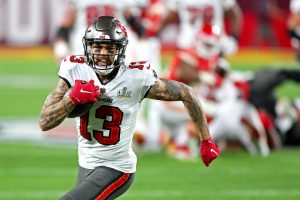 Mike Evans was poised for a shootout in a great matchup against Dallas, but put up a disappointing 5.9 points in PPR. Evans only caught three out of six targets - but don’t overreact too much to this. Tom Brady had two tipped passes that were headed Evans' way that would have been significant gains. Evans ran a route 96% of the time he was on the field, and still controlled 13% of the target share. This is only 2% less than teammate Antonio Brown, who put up an impressive 23.7 points. Evans was also shadowed by TreVon Diggs, who played lights out defense all game. Let’s not forget that Evans posted a 23.08% red-zone target share in 2020 (10th in the NFL). Mike Evans will get his - I think it could be as soon as Week 2 as the Falcons just got torched by a middling Eagles offense. You should feel comfortable starting Evans as your WR2 or FLEX.

Don’t panic on your studs. They all have bad games - and in Zeke’s case, this was a product of bad game script along with an iron-clad front seven of Tampa Bay. Zeke put up 5.9 points with 11 carries for 33 yards and two receptions, which obviously disappointed in an offense-heavy matchup to kick off the season. But let’s not overreact to a simple statline. Zeke played on a massive 82% of snaps. The Cowboys also had starting guard Zack Martin on the COVID-19 list so he didn’t play. Couple that with arguably the best defensive front 7 in the NFL from Tampa Bay, and you have your reason why Zeke’s 11 carries were not efficient. The game script went as expected with Tampa Bay - a down the field passing attack to target the weaker points of their defense. Zeke will bounce back against the Chargers in Week 2. Pounce on panicked owner’s and make an offer for Zeke.

I think some owner’s expectations were a bit too high on Saquon Barkley coming into Week 1. Barkley rushed 10 times for 26 yards scoring 3.7 points. Let’s not forget he is only 11 months removed from a season ending ACL tear, and more people should have expected him to be on a pitch count. Joe Judge came out Monday and stated they are taking a “cautious approach” with Saquon’s return as a workhouse. Let’s not overreact to this statement. The Giants want the face of their franchise to be eased back into a heavy workload, and this should have been expected from more fantasy players. Temper expectations for the first couple weeks, but do not panic sell Barkley just because he may not be a fantasy stud just yet. I predict that as his health improves, he will get back to elite form in the next few games. Like I mentioned with Zeke above, target a panicked owner and go trade for Barkley. 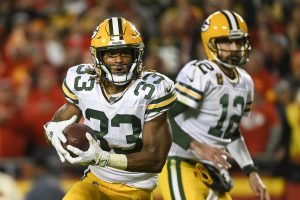 Let’s all take a deep breath before we dive into this one. The Packers may have just put up the most pathetic performance I have ever seen in an opening game. Rodgers had his worst loss EVER in his career against the Saints this week. No stat lines are even worth putting into this article as I am chalking this game up as a fluke. Look, the entire Packers organization had a very tumultuous offseason with Aaron Rodgers wanting a new contract, and he ended up staying with Green Bay one more year. If Rodgers wants to keep playing football after this season, which it sounds like he does, he is going to need to prove that he’s worth a multi-million dollar contract. We may just be seeing some after effects of turmoil, and I’m confident that everyone will be able to get back on the same page. Running Back Aaron Jones didn’t even get a fair shot at showcasing his talent as the Packers were down by so much that their only option was down the field passing. After about the 1st quarter, the Packers were in panic mode. Again, let's not overreact to Week 1. One of the best QB’s of this generation, and one of the highest paid pass catching RB’s are not going to have these kinds of games every week. Look for both of these guys to bounce back against a soft Detroit defense. My advice? You should feel comfortable starting both of these guys in Week 2.

Najee Harris should not be reacted to in the slightest. Harris put up 5.9 points on 16 carries for 45 yards, with one catch. Let’s be honest, we all knew the Steelers offensive line was going to struggle a bit, especially against a stout Buffalo defense. But volume is king in fantasy. Najee played 100% of Pittsburgh’s snaps - not one other Steelers running back touched the field. 16 carries and 3 targets is a great workload, especially for an offense that struggled in the first half of this game. Opportunity is knocking for Harris, and we can’t say he’s an inefficient runner after just one game. The Steelers play the Raiders next week who just let up over 150 rushing yards to Lamar Jackson and Ty’Son Williams. Expect Harris to have similar volume but more production in Week 2. 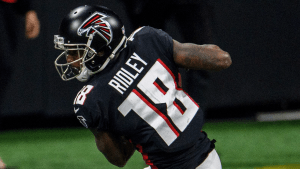 The Eagles have a good defense. Wow does it finally feel good to say that. Matt Ryan was scrambling all game trying to avoid the Eagles dominant pass rush and took three sacks. Darius Slay covered Calvin Ridley like a blanket in the 2nd half. The Falcons struggled to put drives together, and were forced into field goals when they were in scoring positions. Even still, Ryan connected with Ridley five times out of eight targets for 51 yards giving Calvin 10.1 points on the week. Ridley had a 23% target share, which was tied for a team-high with rookie TE Kyle Pitts. Don’t overreact to this Week 1 bust from the Falcons offense. Ryan and the Falcons have two or three of these kinds of games every season, and then come back the next week to score 40 points against a lesser secondary. Ridley and Pitts are both going to have enormous volume and plenty of redzone opportunities to come against lesser defenses. Ridley should be locked in as your WR 1 next week against the Bucs who let Dak Prescott throw for over 400 yards last week.

Brandon Aiyuk - Only appearing in punt returns, Aiyuk’s workload is concerning. The coaching staff has said he is “still learning how to be a pro.” I don’t expect him to put up a zero every week, but I am no longer expecting Aiyuk to be a WR2.

Clyde Edwards-Helaire - It’s clear that CEH is not the focal point of the Chiefs offense as much as we all want him to be. His snap count is fine, but he will have a limited workload all season with the passing attack being so elite in Kansas City. CEH may be an okay RB2 but it doesn’t look like he’ll be in any RB1 conversations this season.

Lamar Jackson - Lamar is a fantastic player and electric in the rushing attack, but last night proved that he didn’t fix too many mistakes that he was making last season. Over throwing short passes and fumbling in key situations, Lamar looked like he was struggling to find his footing. I still see Lamar as a QB1 with rushing upside, but I don’t know if he will crack the top 8 of QB’s this year as expected.

Ronald Jones - Not looking good for RoJo. Not a startable asset until further notice. Bruce Arians may never let him see the field again after that fumble.

Julio Jones - While I understand the Titans had an off game and struggled to keep Tannehill protected, Julio seemed to be a non-factor in this offense only catching three of six passes for 29 yards. Temper expectations going forward, AJ Brown is still the clear number 1 in Tennessee’s passing game.

James Robinson - As much as I want Robinson to be an elite back again, it looks like Urban Meyer disagrees. The Jaguars look like they will be down in a lot of games, and JRob only had 5 carries.

Who do you agree with? Who do you disagree with? Have you seen any of these players traded in your Dynasty Leagues already? Let me know on Twitter, @FFBirdGang.