Anyone who has driven an automobile is (or should be) familiar with the sentence “Objects in the rear view mirror may be closer than they appear.” It’s placed on the passenger-side rear view mirror to notify drivers that what they see in that mirror may not accurately reflect the reality of the circumstances at large. This can be true in fantasy football, as well. Oftentimes we look at a situation and see something that may or may not accurately reflect that situation. In this series, we’ll examine a particular viewpoint and see if it matches reality or if there’s something coming up in our blind spot that may be closer than it appears.

Amon-Ra St. Brown’s late season success was due to other, more established players being unavailable.

After a nondescript start to his rookie season, Amon-Ra St. Brown finished on an absolute tear. Through the first 11 games of the 2021 season, St. Brown had a receiving line of 52/39/352/01 (Targets/Receptions/Receiving Yards/Touchdowns). In the final six games of the season, that line jumped to 67/51/560/51. Extrapolated to a full season, that six-game stretch would have yielded a bananas line of 189/144/1586/14. For comparison, Ja’Marr Chase was the top fantasy-scoring rookie, with a stat line of 128/81/1455/132. Extrapolating small sample size numbers over a full season is always a perilous endeavor, but it does show the fantasy ceiling that St. Brown has. Those numbers would have made him the second highest scoring wide receiver of 2021, behind only Cooper Kupp’s historic season.

Many see this increase in production solely as an increase in opportunity. Lions running back D’Andre Swift missed Weeks 13-16 of the season after injuring his shoulder in the Lions Thanksgiving Day loss to Chicago. Similarly, tight end TJ Hockenson missed the final five weeks after being shut down with a hand injury. Even with those weeks missed to injury, Hockenson and Swift finished 2nd and 3rd to St. Brown in passing targets on the Lions. Other than those three, only journeyman WR Kalif Raymond finished with more than *36* targets.

Hockenson and Swift are and were, objectively, pillars of the Lions offense and ARSB’s elite production did absolutely come with either or both of them out, but there was another factor that coincided with that production leap. Head coach Dan Campbell relieved then offensive coordinator Anthony Lynn of the play-calling duties and took them over for the Lions Week 10 game at Pittsburgh. Jared Goff missed the following week’s game with an oblique injury then returned for the team’s Thanksgiving Day (i.e. short week) game. The following week, in a home game against Minnesota was when St. Brown took off. He saw double-digit targets and caught at least eight balls every game the rest of the way. He was essentially quarterback-proof, as Goff would miss two more games during that stretch. In that Minnesota game, St. Brown got his first rushing attempt of the season. He would see six more by the end of the season. Seven rushing attempts does not a Deebo Samuel make, but it did rank tied for 14th3 in the league. Perhaps getting the ball into St. Brown’s hands was a priority for the HC/play caller. Perhaps not prioritizing doing so was a contributing factor in the demise of the former play caller. 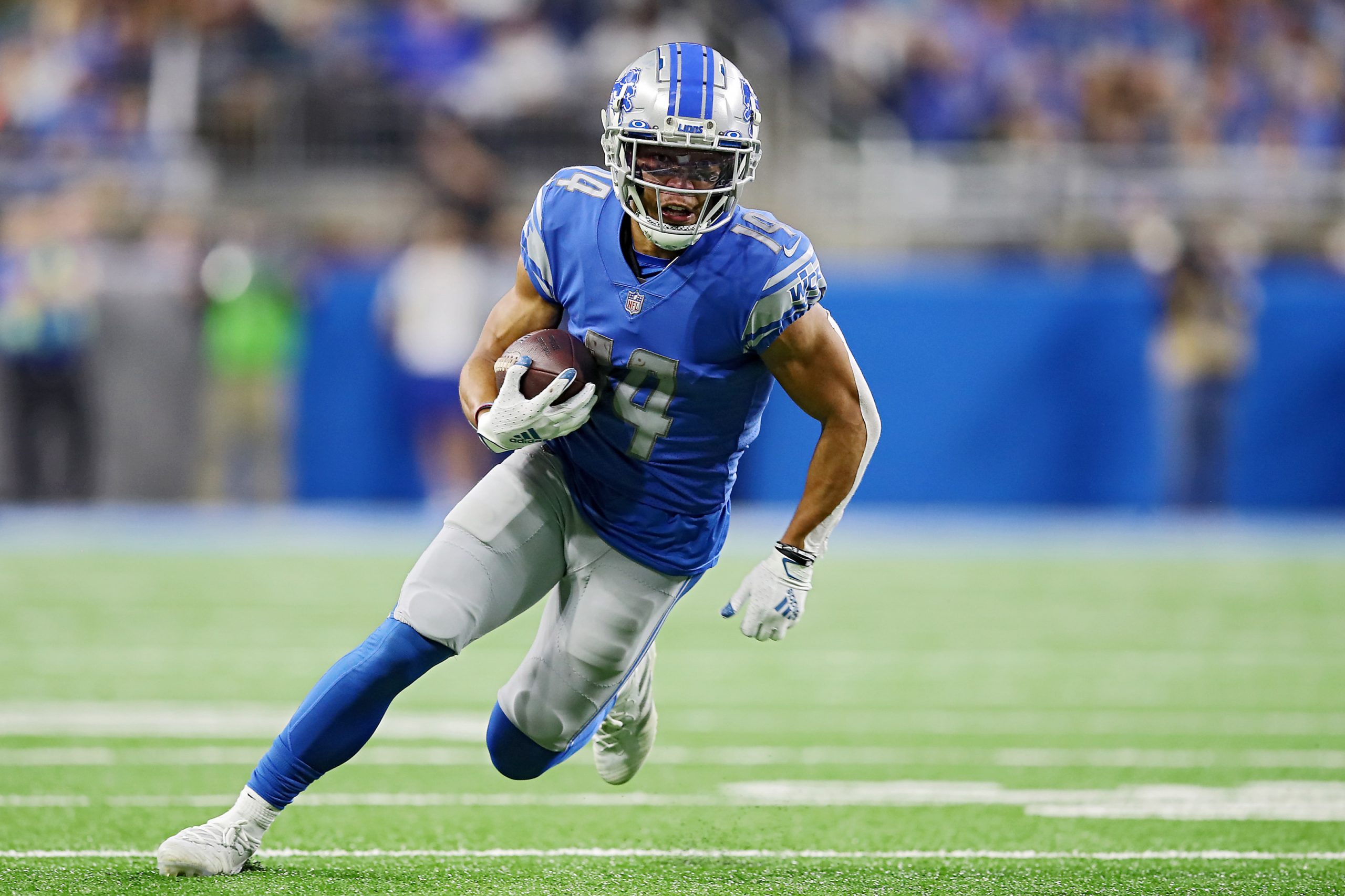 To assess St. Brown’s dynasty value, we need to look back into his prospect profile. As a junior declare from USC, he was expected to be a 2nd round draft pick, with the potential to sneak into the back end of the first round. This was high praise, as the 2021 Draft class was ripe with receiving talent. The aforementioned Ja’Marr Chase, Kyle Pitts, Jaylen Waddle, and Devonta Smith were all seen as surefire first round picks, and Elijah Moore, Kadarius Toney, Rashod Bateman, and St. Brown all expected to go in the early-to-mid second round at the latest. St. Brown would be the only one of those to not fulfill that expectation. He fell to the fourth round, pick 112 overall, and the 21st pass catcher (WR or TE) taken, behind such NFL luminaries as Tutu Atwell, Dyami Brown, Dez Fitzpatrick, and Tre’ McKitty (yikes around).
To what can we attribute the draft day fall for St. Brown? Perhaps his lack of elite speed? Though his game tape showed functional play speed, St. Brown ran only a 4.61 40-yard dash at his pro day4. As a prospect, St. Brown profiled similarly to Chris Olave from this year’s class. Both are top notch route runners with elite body control and excellent hands. Neither are physically dominating, St. Brown bigger, Olave faster. With a number of veteran wide receivers commanding massive contract extensions in the ‘21-’22 offseason, wideouts became a draft priority in 2022. Olave would become the number 11 overall selection. Had St. Brown followed Olave and played out his senior season, he may have similarly benefitted from the changing landscape and commanded significantly higher draft capital and the accompanying increase in contract salary and leverage.

There was no Draft Combine in 2021 due to COVID restrictions. Maybe that played a role? Maybe it was a combination of individual team circumstances? The Packers needed a developmental WR, and there was pre-draft chatter they may select Amon-Ra and unite him with his older brother Equanimeous in Green Bay. That was not to be as GM Brian Gutekunst decided the Pack needed someone with proven return skills and took Amari Rodgers from Clemson. Rodgers would go on to put up an 8/4/45/0 rookie season receiving line. It’s not a stretch to say Gutekunst, among several other GMs, regrets not taking St. Brown when they had the chance.

In dynasty rookie drafts last year, St. Brown was a mid-to-late 2nd round pick in single QB leagues and a late-2nd to early-3rd round pick in superflex/2 QB leagues. That’s no insult in a historically loaded draft class, although some dynasty GMs (myself unfortunately included), like their NFL counterparts may have some lingering regret after prioritizing Amari Rodgers, among others, over ARSB. 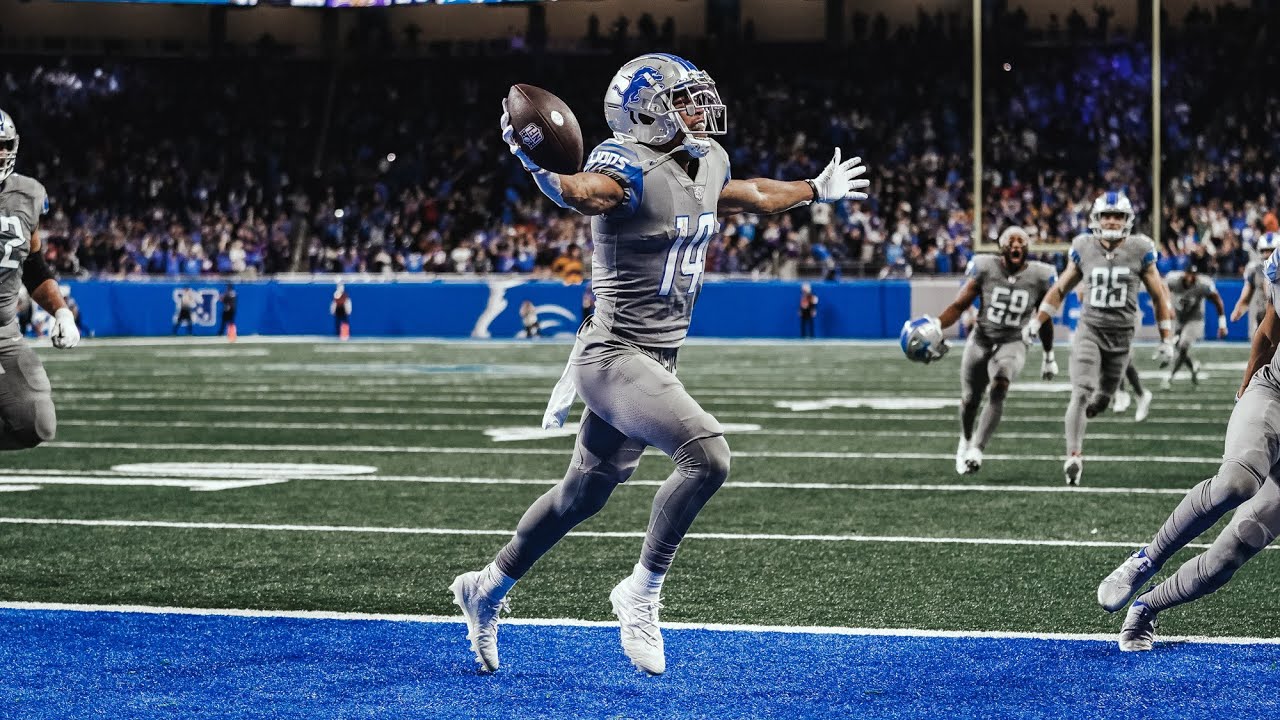 Amon-Ra St. Brown’s late season success was a function of opportunity *and* ability.

Quite simply, you don’t put up the kind of numbers St. Brown did last year without being that damn good. His 76% catch rate during the spike weeks is identical to his season-long rate, and is elite, rookie or not. That makes him a reliable target, and reliable targets get targets, especially from a quarterback like Jared Goff. The analytics sites were more than impressed with St. Brown’s production. Pro Football Focus5 graded him as the 16th best WR in the league and Football Outsiders6 ranked him 22nd.

The narrative that St. Brown was the “only” viable passing game target for the six weeks of his production spike is simply false. Hockenson played in the first game, Swift the final two. Detroit has undoubtedly upgraded its offensive talent. They’ve brought in DJ Chark from Jacksonville as a free agent and drafted Jameson Williams in the first round. Neither of them project to be the type of high volume receiver that Amon-Ra St. Brown has already proven to be, though. It’s also not terribly likely that Chark and Williams end up playing many games together for the Lions. Chark is on a one year deal and Williams will likely miss most of his rookie season after tearing his ACL in the National Championship Game in January. A typical 9-10 month recovery would mean he probably doesn’t suit up until November, at best.

There will almost certainly be more competition for targets in the Detroit offense than there was last year, including and especially when Hockenson and Swift were out, but Amon-Ra St. Brown has proven that he deserves a significant share of those targets. He will never be the physically dominant alpha-WR1 that every dynasty manager prays for before they go to sleep, but ARSB will be a target hog in an improving Detroit offense as a 23-year-old. That’s a Top 20 dynasty WR any way you slice it . Throw in the possibility of an upgrade over Jared Goff at QB (Paging Jimmy Garoppolo; Jimmy Garoppolo, please pick up the Honolulu Blue courtesy phone), and the offensive improvements that would go along with it, and you’ve got something to dream on after dozing off following those prayers.