Najee Harris is the RB1 and Landing Spot Doesn’t Matter

Najee Harris, Travis Etienne, and Javonte Williams are the consensus top three running backs in the 2021 draft class. However, As dynasty owners, it is important to explore why Najee Harris is the top guy no matter what happens at the NFL Draft. All three of these players have been able to show incredible talent at the collegiate level, but what really matters is which players are able to translate what same success to the NFL. 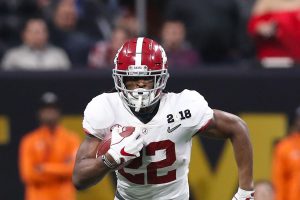 Najee Harris was highly recruited out of high school but truly exploded onto the scene in his junior season. Harris racked up 1,224 yards and 13 touchdowns on 209 carries while adding a 27/304/7 receiving line. Expected to enter the draft, he was positioned behind Taylor, Swift, and Dobbins.  He made the decision to return to Alabama for his senior year.  Not only did he improve his stats drastically, but also his overall ability as a running back. Harris put up an incredible state line of 1,466 yards and 26 touchdowns on 251 carries with a 43/425/4 receiving line.

However, this is not what made me fall in love with Harris. He has the ability to be a true three-down back in the NFL. His footwork at his size and his ability to make defenders miss is truly impressive.  Also with his size, what truly sets him apart is his capabilities in the passing game. Harris became an effective pass blocker and is also able to catch the ball out of the backfield. As I have watched tape on him, I have had to dig to try and find any weaknesses or reasons to question his ability at the next level. The conclusion that I came to and I am forced to ask myself is can Harris produce at the NFL level when he is not running behind the best offensive line in the nation? My opinion is, yes. Harris has shown at the collegiate level that he is willing to fight for extra yards whether it be 20 yards downfield or 3 yards behind the line of scrimmage and I do not see that changing when he plays on Sundays. 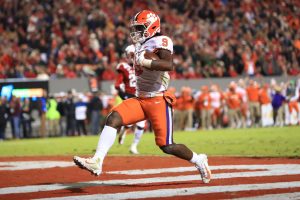 Travis Ettiene has had nothing but a spectacular collegiate career. In his sophomore year he had 1,658 yards 24 touchdowns on 204 carries adding a 12/78/2 receiving line and in his junior year he had 1,614 yards and 19 touchdowns on 207 carries while adding an improved 37/432/4 receiving line. After his junior year, I think everyone would have guessed he would have joined the highly touted 2020 running back draft class, however he decided to return to college for his senior season. In a shortened season, Ettiene added 914 yards and 14 touchdowns on 168 carries and a 48/588/2 receiving line to add to his impressive collegiate career. Ettiene has been arguably the most feared player in open space in college football since he began playing on Saturdays.

The question remains...can he do this on Sundays?

I do not believe there is anyone who questions Ettiene’s ability as a runner in open space and he has certainly shown improvements as a pass catcher. My biggest concerns are if he will be able to be a three down back in the NFL. While watching tape I could not help but notice his tendency to go down on first contact when running between the tackles and sometimes on the edge when he did not have a clear angle. I am also concerned with his ability to pass protect in the NFL.  His talent is not in question.  However, I do fear the realistic chance he is not the three-down back everyone is hoping for. 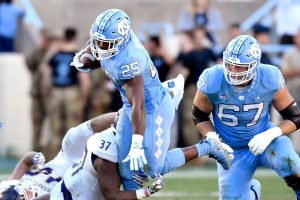 Javonte Williams had a solid sophomore year at UNC with 933 yard and 5 touchdowns on 166 carries adding a 17/176/1 receiving line. However, as it happens with at least one player each year, Williams has jumped up on everyone's boards from out of nowhere after posting a junior season stat line of 1,140 yards and 19 touchdowns on 157 carries adding a solid 25/305/3 receiving line. While watching Williams tape, what has impressed me the most, is his contact balance. There are not many plays where you see him go down on first contact or even second in many cases.

Williams was another player, a lot like Harris, where I struggled to find things that I was concerned about in his transition to the NFL. My biggest note as to why I do not believe there is a case scenario in which he passes Harris, is that he does not have the same explosiveness. Williams was certainly able to show his big play capabilities through the run and passing game, but I did not notice him hit the holes between the tackles in the same way that Harris did.  Another somewhat concerning thing was his the fact he was in a split backfield with fellow draft prospect Michael Carter.  I won't harp on that too much, but one does have to wonder if he is indeed a workhorse back.

Why we should not let history repeat itself?

Over the past few drafts, we have all made some notable mistakes across the dynasty community by allowing landing spots to influence our decisions. A notable player, Nick Chubb, was drafted in 2018 by the Cleveland Browns. Since Carlos Hyde was considered the starting running back, Nick Chubb slowly slid down dynasty players' boards. Chubb was still drafted early in most drafts, but fell behind players he was more talented than (i.e. Royce Freeman) because he did not have as generous of a landing spot.

In 2019, A.J. Brown was selected by the Tennessee Titans. The Titans were not an attractive landing spot because of their low passing volume and the lack of success Corey Davis had at that point in his career. Many believed that Brown was potentially the most well-rounded wide receiver in the draft, however his landing spot did not appear to be favorable. I

Hopefully, after evaluating each player and opening up old wounds, we will not make the mistake of passing on Najee Harris. We often put too much weight on landing spots and situations we believe are more favorable, instead of trusting a player's talent. This offseason it is important to remember to draft talent instead of situation and “what could be”.