When approaching any start up draft, there is a lot of research to go over.  One of the key elements to look at is average draft position, or ADP.  Although ADP is a useful resource in determining which player to take when it’s your turn to draft, there are many players who, for whatever reason, are valued much lower than they should be.  And, in dynasty it’s even more important; as these players will be the foundation of your team for years to come.  The players listed underneath, are better than sleepers, but overlooked all the same.  Here’s one hidden treasure for each skilled position:

Daniel Jones, like many others, is quite polarizing.  Ever since he was drafted, many thought the Giants reached for him at 6th overall.  But, aside from Kyler Murray, he’s been the best quarterback of the class by far.  The problem with Jones is that he has not shown the promise that he had in his rookie season.  His yards per game, quarterback rating and touchdown to interception ratio have all spiraled, but in many ways, he’s improved.  His completion percentage has gone up and his interception percentage has gone down.

He may not look great, but there isn’t much more you look for in a fantasy football quarterback.  Although he doesn’t possess the rushing upside that Lamar Jackson, Kyler Murray or Jalen Hurts do, his rush attempts per game have gone up every year.  Last season, he rushed for over 5.5 per game and I don’t see this number regressing.

The coaching will certainly improve, and the surrounding cast can only get better.  The organization has openly admitted that they’ve done him a great disservice and are committed to him moving forward.  I boldly believe, if he stays healthy, Jones will flirt with QB1 status this upcoming season.  And at an ADP going just before Sam Darnold and Jared Goff, it’s just insulting.  Grab him at this cheap price while you can. 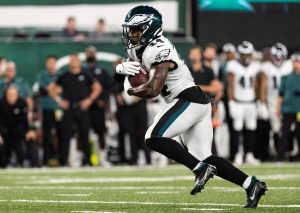 No disrespect to Miles Sanders, but he has not shown that he is the long term solution in the City of Brotherly Love.  As a runner, he looks decent, rushing at over 5 yards per game the last two seasons, but he lacks the touchdowns and elusiveness when it counts the most.  Add to that the string of running backs who have been better at times, his stock has never been lower.  If your quarterback leads the team in rushing, there is clearly a problem at the position.

Ironically, despite the constant shuffle at running back, the Philadelphia Eagles were the top rushing team in the NFL last season, so the value is there.  Kenneth Gainwell didn’t lead the team in any statistics last season, but if you look closer, he’s the one to own.  Despite the least opportunity, he was second in rushing touchdowns.

The greater part of his game, however, is his usage as a receiver.  He was the only running back with a receiving touchdown and was much more effective in yardage.  After only one season, Gainwell is looking like the best option moving forward, and although I’m not ready to believe he is the starter yet, I have faith he’ll overtake the position.  If you have the option to draft the best running back in the best rushing team, at a price of Darrel Williams or Tony Jones, the option is glaringly obvious. 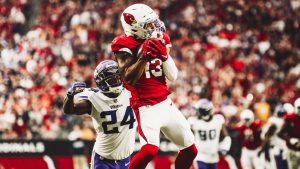 Last season did not go as the Arizona Cardinals expected.  Despite starting as 7-0 and losing only 3 games through Week 13, they squeaked into the wild card game, only to get destroyed.  Despite the meltdown, there were bright spots on the roster.

We all know that DeAndre Hopkins is the primary option for Kyler Murray, but let’s not overlook the value of Christian Kirk here.  Although he’s not at the top of the depth chart, his consistency is extremely underrated.  In PPR last season, he had less than 9 points only 5 times and crossed 15 points the same number.  He’s never going to win your week, but he’ll certainly be a part of it.

As far as second receivers go, the options aren’t too much better.  His catch percentage and yards per target took a big leap in his third season.  Hopkins still has plenty left, but in dynasty, the long term projection is worth it for Kirk.  With players like Van Jefferson and Courtland Sutton valued similarly at ADP, choose Christian Kirk. 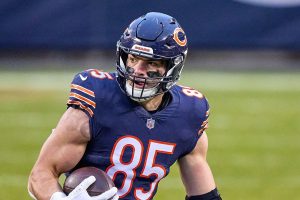 Not too many players had a quieter success than Cole Kmet last season.  While the accolades for youth at the position went to the likes of Pat Freiermuth, Cole Kmet hasn’t been on the minds of drafters, even though the talent is similar.

Truthfully, Freiermuth deserves praise, but so does Cole Kmet.  Despite having similar circumstances, the real differential was the touchdown generation.  With the exact same amount of targets, Kmet outgained Freiermuth by over 100 yards, but he scored no touchdowns.  This has turned him off for many when drafting.

Touchdowns are the most volatile statistic in fantasy football, and I don’t believe this is likely to repeat itself with Cole Kmet.  Even though he shared the field with Jimmy Graham, Kmet was still the 8th most targeted tight end in the league last season.  Clearly having the trust of his quarterback and at only 22 years old, the sky's the limit.  With players like Logan Thomas and Evan Engram being drafted around the same time, Cole Kmet is one of the biggest values in fantasy football this draft season.