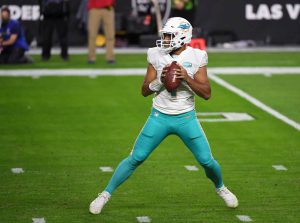 The Miami Dolphins continued their draft trades this year, continuing to turn Laremy Tunsil into more pick...and then trading up to number 6 overall. They addressed their offensive line and devoted several picks to their defense, but a few fantasy relevant players were included in their 2021 draft class, led by University of Alabama wide receiver Jaylen Waddle.

The Dolphins selected Waddle sixth overall, the second wide receiver off the board, right behind Ja’Marr Chase - who went to the Bengals - and several spots ahead of Alabama teammate and Heisman award winner Devonta Smith. Waddle is an electric playmaker with very good speed and YAC ability. In an injury-shortened 2020 season, he gained at least 120 receiving yards in the four full games he played, and was on a pace that would have put his final numbers markedly ahead of Smith’s eventual Heisman-winning stats. Waddle is not just a speed guy either; he is a good route runner and has good hands. Alabama coach Nick Saban has noted Waddle is a great competitor, too. 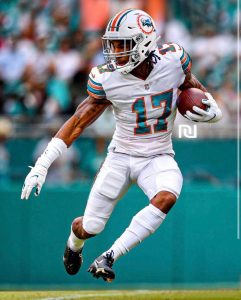 Waddle is a bit undersized at 5’9” and just a shade over 180 pounds. Additionally, his major ankle injury in 2020 could have been a red flag that made him slip in the draft. However, the Dolphins had seen enough that they liked in the two plus years of college production from Waddle and spent a high pick on him.

The draft capital spent on Waddle should mean he will get plenty of opportunity for touches in Miami, but he is not without competition. Free agent signee Will Fuller (suspended for 1 game), another speedster, and veteran DaVante Parker are in the fold, as well as tight end Mike Gesicki (all three will be primary targets to begin the season). Waddle may take a few weeks to carve out a role, and rookie wide receivers generally start slower than rookie running backs, so patience with Waddle may be in order for 2021. But long-term, Waddle is an excellent dynasty asset. However, Dolphins’ quarterback Tua Tagovailoa will have to take another step forward for Waddle to reach his ceiling.

Waddle can be found in the late first round of superflex rookie drafts and the mid first round of 1QB rookie drafts. In startups, he is being taken ahead of some quality veterans, so there may be some rookie fever at play there. He will not be a value pick in that context. 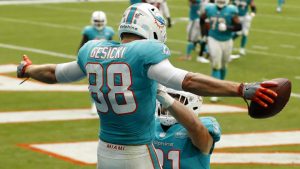 In the third round, with pick number 81, the Dolphins selected Boston College tight end Hunter Long. Long has good tight end size (6’5” and 254 lbs.) and led all FBS tight ends in receptions in 2020. Brian Flores - himself a former BC Eagle - got a good look at Long during the Senior Bowl process and is high on Long’s smarts and toughness. Long was many analysts’ TE3 or TE4 heading into the draft and he was selected right around where folks thought he would be. Like many tight ends his size, Long is not a super athlete, but is a capable blocker and pass catcher. We may see him as the in-line tight end with Gesicki in the slot in two tight end packages, but Gesicki is certainly ahead of him on the depth chart. However, Gesicki’s contract is up after this upcoming season, and Long may rise to the Dolphins’ TE1, making him a good stash in dynasty. Long can usually be found in the third round of rookie drafts, though I have seen him go as early as the late second and as late as the early fourth. He is a good TE depth target, especially given the sad state of the position in fantasy. 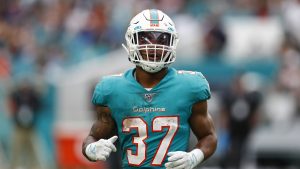 With their last pick, the 244th overall, Miami took University of Cincinnati running back Gerrid Doaks. The seventh rounder has pretty good size (5’10” and 228 lbs.) and a 39.5 inch vertical jump, but is not a speedster (4.63 40-yard dash time). Doaks is a serviceable pass catcher and has been praised for his work ethic. As of now, he is probably the team’s RB3, but would only have to beat out 2020 rookie Salvon Ahmed to be a Myles Gaskin injury away from some serious volume. The Dolphins' offense was pretty balanced last year, and it should remain so in 2021, so there could be work for him in a rotation anyway. Doaks is currently going in the fourth or fifth round of rookie drafts and is a decent taxi squad stash.

The Dolphins competed for a playoff spot last year, and Waddle will add to their offensive weapons. If Tagovailoa can improve, Waddle could be something special. Tight end Hunter Long and running back Gerrid Doaks could be good dynasty depth pieces, with Long having more upside. Overall, the Dolphins addressed some needs and all three players should be on your dynasty radar.