Looking Out For Number One: Michael Thomas 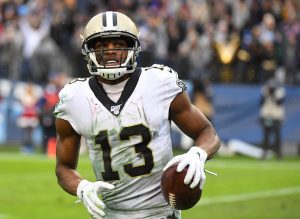 Keyshawn Johnson was the number 1 overall pick by the New York Jets in 1996.  The USC product had a solid career, but never reached the heights that were once hoped for him. His nephew has achieved those expectations and even exceeded them.

The New Orleans Saints had fairly lofty hopes for Michael Thomas when they drafted him in the 2nd round out of Ohio State in 2016. However, I don't think anybody predicted he would become the best WR in the NFL. Sure...he isn't the fastest or most explosive receiver in the league, but he is probably the most reliable.

In 2019, Thomas broke the single season receptions record when he hauled in an unreal 149 catches for 1,725 yards (7th most all-time) and 9 touchdowns. His efficiency was off the charts too. He was targeted 186 times, meaning he caught the ball 80.1% of the time he was thrown to. His 20 redzone receptions also ranked 1st in the NFL

The 27 year old is well on his way to becoming one of the greatest of all time. To this point in his career, Thomas has accumulated 470 receptions and 5,512 yards. Both of those totals are the most ever through 4 seasons.

Don't expect him to be a deep threat for you, as he only ranked 72nd in deep targets last season. However, at 6'3" and 212 lbs, he is the ultimate possession receiver. Thomas averaged 11.6 yards per catch and 9.3 yards per target last season. He is the only WR in NFL history to record 90+ catches in his 1st 4 seasons. A 3-time Pro Bowler and a 2-time 1st Team All-Pro, Michael Thomas is just now entering his prime years.

Thomas may be due for a slight regression in 2020 with the Saints' addition of WR Emmanuel Sanders, but he is still the number 1 WR in our rankings.