Lockett or Metcalf, Metcalf or Lockett???

Russell Wilson has been a star QB for years, but has never had the opportunity to have multiple star WRs.  Last season, the Seattle Seahawks had two receivers emerge as prime targets and fantasy must haves...especially in dynasty formats. 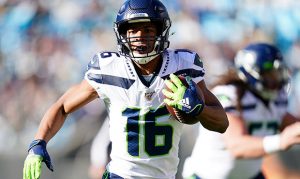 Tyler Lockett, used primarily as a returner and 3rd receiver during his first three seasons, really came into his own.  After never receiving more than 71 targets in a season, Lockett exploded with 110 targets in 2019.  He set career highs in targets, receptions (82), and yards (1,057) in his 5th season out of Kansas State.  The somewhat diminutive speedster was always seen as a threat, but very few saw him as a major dynasty asset.  That has all changed over the past two seasons. 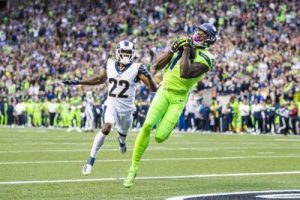 DK Metcalf fell to the Seattle Seahawks in the 2nd round of the 2019 NFL Draft, after being believed to have been a 1st round talent.  Concerns over his route running and durability led to the drop.  The former Ole Miss WR went on to amass 100 targets for 58 receptions, 900 yards, and 7 TDs in his rookie season.  Metcalf finished 3rd in PPR leagues among rookie WRs.  Even though it didn’t help you in season long leagues, Metcalf had a massive game against the Eagles in the playoffs.  He went for 7 catches, 160 yards, and a TD on 9 targets in the victory over Philadelphia.

So, the question heading into the 2020 season...Which Seattle WR do you target?

While Lockett has found success with Russell Wilson over the last 2 seasons, I think DK Metcalf is going to be a monster over the next few years.  Metcalf played in all 16 games for Seattle, calming any concerns over his durability.  Pete Carroll trusted him enough to have him on the field 84% of the time. 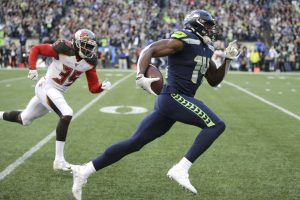 Don’t get me wrong...I like Tyler Lockett.  I think he will continue to be successful and will border on WR2 productivity moving forward.  I just like DK Metcalf more.  He has WR1 potential, and could move his way past Lockett in the targets department, as he only had 10 fewer last season.  His 100 targets led all rookies, and I only see him garnering more attention from his QB.  Standing 6’4” and 229lbs, Metcalf has everything you would want out of a WR.