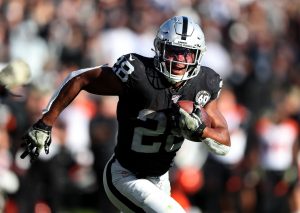 I know, that’s as cheesy as anything you’ll hear in Vegas, but the Las Vegas Raiders have something special with Josh Jacobs.

Jacobs is currently going as RB9 in PPR setups, usually early-to-mid second round. Being drafted around him at the RB spot are the likes of Joe Mixon, Kenyan Drake, Nick Chubb, Miles Sanders, and Austin Ekeler. Jacobs is the main reason why I love being slotted into the last couple of spots in a draft right now, and is a player that I’d push all my chips in on (ok...last Vegas reference).

While Jacobs isn’t wildly far away from the top five RB’s already in ADP, let’s get into why I have him as a top-5 dynasty back.

What Jacobs already has in common with players like Christian McCaffery, Saquon Barkley, Derrick Henry, Dalvin Cook, and Alvin Kamara is he has virtually no one challenging him for touches.

The current running backs behind Jacobs include: Lynn Bowden Jr.(R), Devontae Booker, and Jalen Richard. Bowden is a third round rookie, likely to be used in multiple spots including special teams and not a real threat to steal carries. Booker hasn’t carved out a significant role in an offense since his rookie season in Denver in 2016. Richard is ultimately the biggest threat to Jacobs...not in terms of carries...but rather as a pass catcher out of the backfield.

Jacobs is the clear lead back.

Every Number Says ‘Give This Man The Ball’:

Let’s just lay out the metrics for Josh Jacobs in his rookie season:

In 13 games last season, Jacobs saw 242 carries, which was the 13th most in the NFL. That averages out to 18.6 attempts per game which is the same as Nick Chubb, 0.2 behind Ezekiel Elliott, and 1.6 behind Derrick Henry.

Vegas is committed to getting Jacobs the rock. 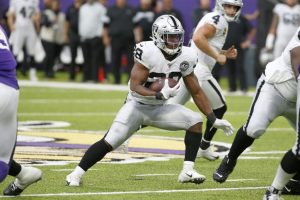 Jacobs did finish behind Richard and Deandre Washington last season in targets, both of whom had over 40 targets. With Washington out of the mix, that frees up 41 targets. The assumption is that Richard will largely assume these targets. If Richard took 25 of the vacated targets, that would leave 16 on the table. Bowden might get a couple of plays drawn up for him as he is pretty electric in open space. Let’s assume Bowden gets eight and leaves the latter eight to Jacobs. Jacobs would see 35 targets...not bad. While that’s the mathematical route to the targets for Jacobs, the coaching staff is well aware that he’s their best offensive player. They’re going to find ways to get Jacobs involved as much as possible.

Per GM Mike Mayock, "I couldn't have been happier with Josh. Josh can catch a football, and I think challenge No. 1 for him in Year Two is developing those talents,” (Eddie Paskal-- raiders.com).

Coach John Gruden and GM Mike Mayock tend to do things to the beat of their own drum. Last season, the Raiders committed to Jacobs, and often you have to read between the lines with coach and staff speak, but here...the numbers back up the ‘speak’.

Teams require backfield depth and that’s what the other RB’s on the depth chart are. The Raiders aren’t scheming up big things for Booker nor Bowden that are going to ultimately take away from Jacobs.

I get that everyone would love to have CMC, Zeke, or Saquon to start their dynasty team, but Jacobs is younger than all of these players, as well as all of the players I mentioned at the top of the article.

Age isn’t everything in dynasty, but when a player already has the production Jacobs had in his first campaign, his stock is only going to continue to trend up. He’s the clear number one back for his team.  The team is feeding him, he has virtually no competition for carries, and his pass work should increase. Everything is in line for Jacobs to be a star.

If you’re in the back of the draft order, do yourself a favor and make Jacobs a cornerstone of your squad.