The Jacksonville Jaguars’ 2021 draft class is led by two first round picks and college teammates, Clemson’s Trevor Lawrence and Travis Etienne. After addressing defense and offensive line with most of the rest of their picks, the Jaguars selected tight end Luke Farrell in the fifth round, and wide receiver Jalen Camp in the sixth. Much of their offensive production will depend on how Lawrence and Etienne develop, and both have the potential to contribute right away.

Lawrence, dubbed a “generational” quarterback prospect, had been touted as the number one overall pick since high school. His 6’6” frame, rushing upside, and ability to make a variety of throws make him a good bet to thrive in the NFL. Against elite competition and while under pressure, his performance faltered a bit, but every prospect has flaws. 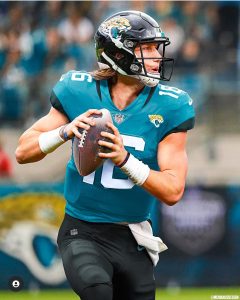 While coach Urban Meyer has his detractors, it is hard to imagine Lawrence will not be a big part of an improving Jaguars squad. Lawrence inherits some good weapons in Jacksonville. Returning receivers DJ Chark and Laviska Shenault are joined by free agent Marvin Jones and 2020 rookie Collin Johnson. Etienne and returning 2020 UDFA running back James Robinson form a solid backfield duo. It is bound to get better than the 1-15 2020 mark in Jacksonville.

But what can we expect from Lawrence in fantasy? Lawrence has elite talent and good weapons, The team will be playing from behind a lot, which should mean high passing volume. His rushing upside provides a safe fantasy floor, too. Lawrence should be a solid contributor in 2021 and an elite dynasty asset moving forward.

Etienne’s fantasy outlook is a bit less clear. Meyer called him a third down back on draft night and worked him out at wide receiver in spring OTAs. Robinson looms there after a very solid 2020 campaign. Since Jacksonville spent a first round pick on him, Etienne should get plenty of opportunity to prove himself and earn touches. We should see him start as a pass catching back and run some routes out wide, too, It is entirely possible, though, that Etienne’s role could grow at the expense of Robinson. That would make him a great value. Even if he remains a third down back and gadget player, the high passing volume that helps Lawrence will help Etienne, too.

Lawrence and Etienne are the elite pieces of this draft class. Lawrence is the 1.01 in just about every superflex rookie draft, and Etienne is a mid-first rounder. Even in 1QB rookie drafts, Lawrence finds a way into the first round, and Etienne goes earlier. In startups, Lawrence is among the top-12 quarterbacks taken, and Etienne is being selected ahead of several solid, experienced veteran. Many dynasty managers will have a lot invested in these two Jaguars, and, although each may take some time to find their way in 2021, both should be fine dynasty assets moving forward. 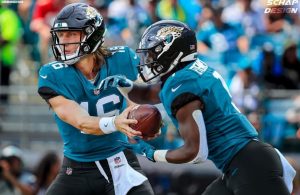 Farrell and Camp may not even make the final roster. Though given the lack of contributors at tight end for the Jaguars, Farrell will have the better shot. He could be a fifth round rookie draft pick or post-rookie draft waiver target, and could be worth a very deep flier in startups.

Overall, the Jaguars two draft headliners will look to push the team forward and there really is not anywhere to go but up for Jacksonville. Both should be very good dynasty assets, with Lawrence clearly having the bigger upside. If Urban Meyer can make the transition to the NFL well, our expectations for Lawrence and Etienne will be even higher. Draft both with confidence.