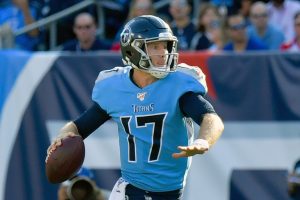 Going into the 2019 season, the consensus seemed to be that it was the last shot for Marcus Mariota to prove that he was the real deal and deserved to continue as the signal caller for the Tennessee Titans. Ryan Tannehill came over to the Titans for a fourth and seventh round draft pick, with Miami paying five of the seven million owed on his contract (man, how good does that look now?). At the time Tannehill moved on from Miami, his last few seasons had been injury plagued. He was productive when he was on the field but found it difficult to stay healthy. The Titans started 2-3 last season and failed to score more than 20 points in any of those contests. The Mariota era ended, and the Titans turned to Tannehill.

I’ll be the first to say, I didn’t think Tannehill was going to be ‘the guy’. If you haven’t noticed, starting quarterbacks that can actually change your team are hard to come by in the NFL. Once Tannehill took over, everything changed for the Titans. Tennessee went 7-4 while Tannehill went BANANAS. B.A.N.A.N.A.S. The quarterback threw for 22 touchdowns (rushed for another 4), had 2,742 passing yards, sustained a 70.3 completion percentage, and ran for 185 yards… all in 11 games. His 16 game pace was just shy of 4,000 yards with 32 passing touchdowns and 269 rushing yards. If you could guarantee that same performance to a fantasy manager at the draft, you better believe they’d smash that draft button all day long.

So where does this leave Tannehill for Redraft and Dynasty?

Well for redraft, we can utilize Bestball 10’s data to get a feel for what redraft looks like if you drafted today. Tannehill is currently going as QB 18 (obviously not a QB1), and a mid range QB 2 for those in a 2QB/Superflex league. He’s currently being drafted after the likes of  Matt Stafford, Jared Goff, and Ben Roethlisberger. Tannehill is being drafted just before Joe Burrow, Kirk Cousins, and Jimmy Garoppolo. That gives you an idea of his draft tier. You can make a case for all of these guys. You can also poke holes in all of their game and potential.

The QB’s in front of Tannehill

Ironically enough, the QB’s going in front of Tannehill, even after last season, are either coming off of injury or a bad season - though Goff did look considerably better once the Rams went to 12 personnel.

-Big Ben is coming off Tommy John surgery which is rare to see for a QB, so it’s sort of an unknown; however, in regards to pitchers in baseball, the success rate for that surgery is considerably higher today than it was five or ten years ago. In fact, guys tend to come back throwing harder than they did previously. Really for Ben, it’s about being in football shape and connecting with some new faces.

-Jared Goff. We’ve seen the high points for Goff, but unfortunately we’ve also seen the low. And woof... it’s not good. The questions for Goff are: Do the Rams stick with their late season switch to 12 personnel where he was finding success (along with Robert Woods and Tyler Higbee)? Or do they shift offensive philosophy with the departure of Brandin Cooks?

-Matt Stafford’s potential and upside is debatable when considering him or Tannehill at your QB spot, and I couldn’t fault someone for heading that direction. By all reports, Stafford should be all systems go and fully recovered from his back injury.

While all of these QB’s are drafted ahead of Tannehill, none of them offer the rushing that Tannehill brings to the table.

The QB’s behind Tannehill

-Joe Burrow. There was no doubt he was going to be the overall number one pick for this year’s NFL draft. He was ‘the chosen one’ for the Cincinnati Bengals’ franchise. Surrounded with pretty decent weapons in Tyler Boyd, Joe Mixon (if he gets his deal done), and A.J. Green (if he can stay on the field...I have doubts). The Bengals did improve themselves with the draft, no doubt. With a shortened off season, Burrow will have limited reps with his teammates. While there are a lot of things you can substitute, reps aren’t one of them, so the start for Burrow could be rocky.

-Kirk Cousins. Is there a QB with more polar opposite thoughts from both fans and fantasy managers alike? Cousins has been known to be a mostly consistent fantasy producer but has had it taken on the chin in a few games, a few too many for some. He lost a top target in Stefon Diggs, and Adam Thielen is going to be the one in this receiving corps. Thielen will likely still produce but remember, Thielen battled hamstring injuries quite a bit last season. While that doesn’t mean he will do the same this season, it does mean he’s more likely to have a recurrence of that injury than a player who has not had that injury. Should he go down, Cousins’ options really become limited. That’s perhaps the most linear comparison with Tannehill. If A.J. Brown was to go down, Tannehill would have less than stellar options to throw to, and the Titans could just hand it to Derrick Henry and rely on their defense.

-Jimmy Garoppolo. Jimmy G. is another polarizing QB. He doesn’t throw the ball all that far, and in some games, all that often. His WR’s do a lot of the work after the catch. Oddly enough though, his numbers really are the most similar to Tannehill of this group, less the rushing.

For the purposes of redraft, I’m on the Tannehill hype train. Was his touchdown percentage outrageously efficient? Yup. Will it regress? Probably. However he’ll go into year two, and he’ll now be acclimated to the Titans offense. After what the Titan’s saw from A.J. Brown over the back half of the season, you have to imagine he’s almost never coming off the field, and Tannehill will have him as his go to option all season. Oh by the way, Jonnu Smith will finally have a clear path at the TE position, and at this point he’s simply a more athletically gifted and talented player than Delanie Walker.

The dynasty portion of this take is actually significantly shorter. Ryan Tannehill secured the bag in the offseason with a 4 year extension. He’s the guy for the Titans. Derrick Henry however, last year’s AFC rushing leader, is not guaranteed to suit up as a Titan past this season. Extension talks have been pretty mild at this point, at least publicly. While Tannehill was amazing last season, everyone knows that without Henry, this offense looks very different, which includes the opportunities and comforts that Tannehill has as a passer. Now, the Titans could find someone to come in and take Henry’s spot (and perhaps Henry is partly a product of this system), but I’d imagine the odds of a smooth transition would be slim. The Titans also need a second receiver (sorry, Corey Davis truthers). This could be the situation where Tannehill helps you this year, and you look to move on from his production after this season. Personally, I think Tannehill is the real deal and can be a strong option for both your redraft fantasy teams as well as your dynasty teams.