In 2020 Russell Wilson was the overall QB3 in SuperFlex Dynasty leagues. He is now being drafted as the QB9 in dynasty Superflex leagues. Why is it that over the last two seasons his stock has plummeted?

In the 2020 season, Russel Wilson finished as the QB6 which is exactly what you want from your elite QBs. Before he got hurt in the 2021 season, he was averaging just short of 27 PPG. Josh Allen, the QB1 in the 2021 season, averaged 23.7 PPG.  It is fair to say that Russ was off to a hot start before this injury and yet his stock has plummeted steadily. 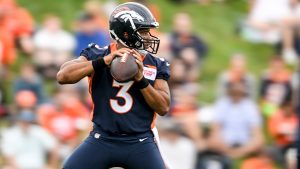 Russ had an injury on his throwing hand so it was expected he would have a tough road to recovery. Although he only missed 3 games you could see it impacting his game until about week 15 where he posted 20, 34, and 29 fantasy points in his last 3 games. Is it because of the trade to the Broncos? He has a better receiving core this year vs the Seahawks of last year.

I would prefer the Denver Broncos supporting cast as a whole. Without Pete Caroll holding Russ back, wouldn’t we expect Russ to have more production? The Broncos were top 12 in pass attempts last year, which bodes well for Wilson. Russ still has rushing upside, elite attributes, and the best supporting cast he has had in several years.

Let’s talk about his age in comparison to the guys going in front of him, and how they are significantly younger than him. Wilson is 33 years old but in terms of a QB, he still has a good 5-7 years of high level play. I believe that Russ should be going in the same range as Jackson, Murray, Burrow and ahead of Dak - definitely not behind them by almost a whole round.

Wilson has finished 8 of his last 9 seasons as a top-10 QB. The only turning point in the ninth season was because of his injury. He is being under drafted in Dynasty and redraft right now. When Russ is healthy, he is as consistent as anyone in the league. The dip is not warranted in my opinion, but recency bias tends to control ADP pretty heavily. Go buy LOW on Wilson as an elite QB and you will reap the benefits.