Week 6 is in the books. We now have a good idea how these NFL defenses are panning out. We see now who’s playing and who’s not, which players are playing in certain situations, and who is making a name for themselves on defense. I’m here to tell you which IDP players to target for week 7 moving forward.

Gregory came up big yet again for the Dallas Cowboys. He posted 3 solo tackles, a tackle for loss, 2 sacks, and a forced fumble. He also had two quarterback hits as well. That was good for 16 fantasy points on the day. He now has 4 sacks in his last two games. I mentioned him two weeks ago. Now it’s time to snatch him up off the waiver wire.

Cameron Heyward, DE, Pittsburgh Steelers (62.00) - Wow, Cam Heyward is still getting it done at the young age of 32. Heyward has been a solid IDP option all season, and he kept it up Sunday against Seattle. He finished the day with 9 total tackles, 2 tackles for loss, and a sack. That was enough for 17.50 fantasy points on the day. He has been consistent all season and is averaging 10.17 fantasy points per game. He should be widely available. He is definitely worth a pickup with these numbers.

Whitney Mercilus, DE, Free Agent (33.00) - This may be a little strange, but Mercilus needs to be monitored. He was released by the Houston Texans and will most definitely be picked up quickly by a contender. He is still a very effective pass rusher, and should put up some fantasy points depending on who picks him up. He’s not a must-have, but you should keep him on your radar. 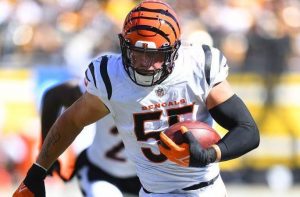 What can I say, I’ve been telling you about this guy for weeks now. He put up another great performance against the Detroit Lions posting 6 total tackles, 2 tackles for loss, and an interception. That was good for 16.50 fantasy points. If, for some reason he is on the waiver wire, grab him. He should be the top priority.

Cole Holcomb, LB, Washington Football Team (69.50) - Holcomb has been a huge surprise so far, and he continues to impress every week. He had one heck of a day against the Kansas City Chiefs racking up 10 tackles, a sack, and a forced fumble. That was a total of 16.50 fantasy points. Holcomb should be priority number 2 or number 1 if Logan Wilson is unavailable.

Jordyn Brooks, LB, Seattle Seahawks (59.00) - Jordyn Brooks continues to fly under the radar, but that may not last much longer. This 2nd year player posted 14 total tackles against the Pittsburgh Steelers Sunday night. He is averaging 9.83 fantasy points per game this season. It’s hard to bench an IDP who is putting up 10 fantasy points a game. 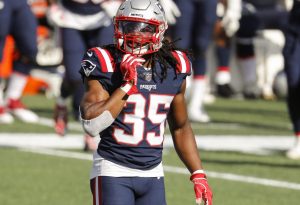 Kyle Dugger continues to make a name for himself in this New England defense. He had a fantastic game against the Dallas Cowboys on Sunday posting 8 total tackles, a pass defended, and an interception. That was good enough for 13 fantasy points. He is averaging 8.42 fantasy points per game this season, which puts him firmly in the top 10 at defensive back. He needs to be owned.

Kenny Moore, CB, Indianapolis Colts (59.50) - Moore continues to be a rock-solid IDP every week. This past Sunday was no different. Against the Colts, he racked up 10 total tackles and a tackle for loss. That was a 13 point fantasy day for the cornerback. Averaging 9.58 points per game at cornerback puts him only behind superstar Trevon Diggs. Moore should be owned in all IDP formats.

Kevin Byard, S, Tennessee Titans (59.50) - Byard is starting to stand out in IDP leagues. He had another solid game Monday night against the Buffalo Bills with 2 tackles, a pass defended, and an interception. He’s not a must-have, but let’s see if this keeps up.