Houston, We DON'T Have a Problem. 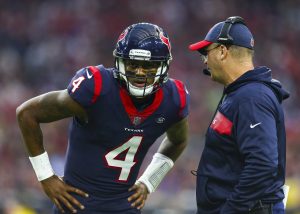 Oh Houston, what have you done?...And by Houston, I mean Bill O’Brien.

The Texans added the title of ‘general manager’ to the duties of O’Brien in January of this year, and he’s been very active. Last year, it seemed like O’Brien was already running the show from the GM office even though it wasn’t official. The Texans moved a number of draft picks for left tackle Laremy Tunsil, and traded star pass rusher Jadeveon Clowney before last season began.

Since officially becoming GM, O’Brien has removed wide receiver DeAndre Hopkins, who had at least 1,000 receiving yards every year since 2014, except 2016 (the Tom Savage, Brock Osweiler, and Brandon Weeden QB season...understandable). In the trade for Hopkins, the Texans acquired running back David Johnson (the Texans took on his entire salary) from the Arizona Cardinals along with draft compensation. O’Brien then shopped the 57th overall pick in this year's draft for WR Brandin Cooks from the Los Angeles Rams. The Texans continued to try to bolster their WR depth by signing free agent Randall Cobb to a three year deal.

Need a flow chart yet?

All of that said, for all of O’Brien’s wheeling and dealing, the Texans still have Deshaun Watson at QB, and he’s practically the only reason Texans fans have any sanity left.

What does all of this mean for Watson and your fantasy squad? He’s been a perennial fantasy stud the last two seasons, and I’m here to tell you that isn’t about to change. Do not press the panic button.

Watson is an outlier:

Deshaun Watson, mercifully for Texans fans and delightfully for fantasy managers, took over the Texans QB job in 2017. Although his season was cut short by an ACL injury, in his seven starts he had 21 total touchdowns, and the Texans knew they had something special. In 2018, Watson accounted for 31 total TD’s to only nine interceptions and added 551 rushing yards. Last season, Watson again accounted for more than 30 total TD’s, 12 INT’s, and another 400 plus yards on the ground, leading him to an overall QB4 finish in the season for fantasy (15 starts).

Perhaps the most impressive part is that Watson put up these numbers on around 500 pass attempts in each of the last two seasons. Simply put, Watson is an outlier. Watson’s passing TD% over the last two seasons has been 5.1% and 5.3%, respectively. Only Drew Brees, Russell Wilson, Kirk Cousins, Jameis Winston, Ryan Tannehill, and Patrick Mahomes finished both 2018 and 2019 with a passing TD% over 5%, along with Watson. Pretty good company. Of that group, only Tannehill (23 starts), Brees (26 starts), and Wilson (started every game) had fewer pass attempts than Watson.

Watson has to do MORE: 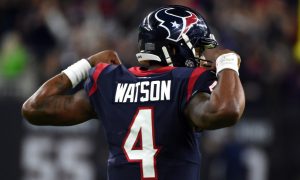 Asking Watson to produce more is a pretty big ask, but he’s simply going to have to do so. The departure of WR Deandre Hopkins can’t be understated. New addition WR Brandin Cooks has four seasons over 1,000 receiving yards. Randall Cobb has one season (2014) of such a mark. After that, no pass catcher on the Texans has surpassed the 1,000 yard receiving mark. While that sounds daunting, Cooks, Will Fuller, and Kenny Stills all represent deep threats. Stills ranked 7th in yards per target, Fuller 18th, and Cooks 49th (though he was 9th in 2018). Watson’s deep ball completion percentage was at 42%, which was good enough to rank him at 7th overall.

Watson has taken 106 sacks over the last two seasons. Part of that has been the offensive line and part of that has been the learning curve of getting rid of the ball quickly. The addition of LT Laremy Tunsil helped remarkably last season as he only allowed a pressure once every 28 snaps per Pro Football Focus. Tunsil also led the league in penalties (20, playoffs included). Penalties, and at best, average offensive line play at the other positions is likely to create a pronounced opportunity for Watson to use his legs and extend plays. Watson has proven he can take off and run. With these deep threat receivers, he’ll need to buy time to chuck it down the field.

Watson is still a top five fantasy QB. He’ll only be 25 years old at the start of the season, and while his ceiling isn’t that of Patrick Mahomes or Lamar Jackson right now, he’s still an elite talent and a difference maker at the position. A lot of fantasy managers have Dak Prescott, Kyler Murray, and even Russell Wilson ahead of Watson in their ranks. While I wouldn’t fault anyone for deciding on those players over Watson...they all have their own arguments...Watson is as much of a consistent, solid value that you can hope to find within this draft range.

If there’s a league mate that is down on Watson’s value because of his surrounding cast, go after him now, as it may well be the lowest value you’ll be able to secure Watson at for a while. Deshaun represents a giant tier break from players like Josh Allen, Matt Ryan, Drew Brees, and Carson Wentz, all of whom are going within about 28 picks of Watson. I can’t fault you for subscribing to the late round QB theory while drafting a team in a one QB league. However, if you’re in a league that allows you to start more than one QB, Watson is an enormous value that will provide long-standing, difference-making numbers for your fantasy team.