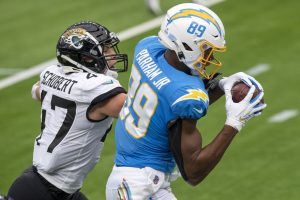 The LA Chargers have now reportedly told TE Hunter Henry he will not be franchise tagged. You can either see that as black and white, or you can look for the gray. The gray being – it is now officially Donald Parham SZN. Since the Chargers will officially not be tagging Henry, they have unofficially declared to the football world that they believe in Parham, and why not?

Parham is a big man. He stands at 6’8” and weighs 237 pounds.  By my count, Parham is currently the tallest tight end in the league, and the tallest to play the position since Leonard Pope in 2012.

Before last season, it was a journey for the 23-year-old Stetson University prospect. He first signed with the Detroit Lions in 2019 after going undrafted, but was cut shortly after. Then he signed with Washington but was released. From there he ended up with the XFL’s Dallas Renegades and we all know what happened there. All of that led him to the Chargers.

In 2020, Parham finally got his big break by appearing in 13 games for the Bolts. He recorded 10 receptions, 159 yards and 3 touchdowns. He also posted a sad-looking 50% catch rate, but that doesn’t tell the whole story. His catchable-target rate was much better at 65% and his true catch rate improved to 76.9%.

Parham also only recorded 1 drop and posted a 28.6% contested catch rate. That percentage ranked him 29thin the league, which isn’t bad for a first-year-former-XFL player.

Possibly the best 2020 stat for Parham: He saw a total of 20 targets on the year and 7 of them were in the red zone. In addition to the red zone looks, Parham averaged 15.9 yards per reception and 9.8 yards per target. Those numbers together show versatility and a budding relationship between Parham and his quarterback, Justin Herbert.

This is what we’re all here for, right? RIGHT. The ‘Herbert to Parham’ connection could be something special for years to come. For one, Herbert is special. Two, the Chargers offense will be centered on passing the ball as long as Herbert is under center.

The Chargers ranked 5th in 2020 in the most pass plays per game, averaging 41.3. That’s a lot of volume to go around. Hunter Henry saw 16.8% of target share in those plays (92 targets), which ranks 11th in the league. That leaves a massive hole to be filled.

Herbert doesn’t like to throw long either.  As a rookie he only averaged 7.3 yard per attempt and air yards per attempt; those numbers ranked him 17th and 26th in the league, respectively. Since we’re buying Parham here those numbers are reason to celebrate because they’re awfully close to Parham’s 9.8 yards per target (see above).

Given the sheer volume at play in the Chargers offense and absence of Henry – Parham is a BUY in all formats right now. There isn’t much, if any, competition behind him either. Parham is the new TE1 in LA, and could soon be the TE12* in our hearts.