Fred Warner: Invest in the Future 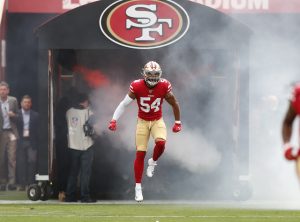 Fred Warner has quickly become one of the best Linebackers in the NFL.  The 23 year old entered the league out of BYU in 2018, and has been a tackling machine for the San Francisco 49ers ever since.  Through two seasons, Warner has racked up 242 combined tackles...174 of those being solo tackles. In 2019, he finished 6th in the NFL with 89 solo tackles.

Warner showed he is a solid all-around LB.  After not recording a sack in his rookie season, he finished 2019 with 3 sacks.  Warner also had 1 interception (returned for a TD), and forced 3 fumbles.

Durability is a big thing when considering who to target in fantasy leagues.  In his two seasons, Warner has not only appeared in all 32 games, but he has started every game as well.  The great thing is his usage is off the charts.  His rookie season in 2018, the young LB was on the field for a staggering 99% of the 49ers defensive snaps.  In 2019, he took a slight step back from that incredible number, playing in 96% of snaps...still an outrageous total.

Warner is a future Pro Bowl LB, who you should look to target if you miss out on guys like Darius Leonard, Roquan Smith, and Devin White.  We have Fred Warner ranked as the 7th LB in our IDP dynasty rankings.